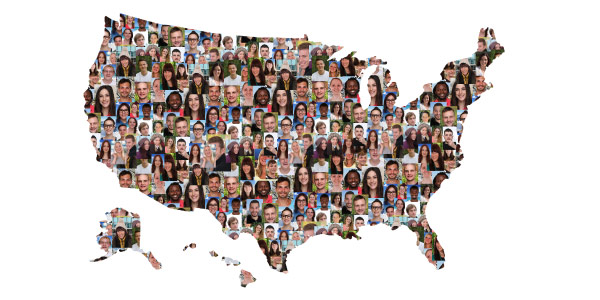 Growing racial and ethnic diversity in countries around the world, fueled by international migration, has drawn increasing attention to patterns and trends in racial and ethnic inequality. In the United States, this remains a topic of intense public interest and concern — and disagreement. Some are deeply pessimistic, maintaining that inequality, including racial and ethnic inequality, is woven into the country’s fabric. Others are cautiously optimistic, as the legal foundations of racial inequality were dismantled during the Civil Rights era and public attitudes have, for the most part, moved in a direction where people are more accepting of others, as indicated, for example, in the increase in mixed marriages (Wang, 2012).

High, but declining racial and ethnic inequality in the United States

My recent research on socioeconomic inequalities indicates that while racial disparities in the relative likelihood of experiencing poverty and affluence are large, they generally declined over the 1959 to 2015 period (Iceland, 2019). In this study I use the official U.S. measure of poverty, originally devised in the 1960s, which is an absolute measure. The measure has two components: poverty thresholds and the definition of family income that is compared to these thresholds. The thresholds remain the same over time, updated only for inflation, and vary by family size and number of children. In 2015, the poverty threshold for a family with two parents and two children was $24,036 (Proctor, Semega, & Kollar, 2016). I use an absolute measure of affluence as well, where the threshold is set at five time the poverty threshold in a given year (Iceland (2019) includes more discussion of poverty and affluence using alternative definitions). Based on these measures, 15 percent of the U.S. population was poor in 2015, down from 22 percent in 1959. Meanwhile, the percentage of people who were affluent increased from just 6 percent in 1959 to 27 percent in 2015.

Of note, poverty declined for all groups, but moderately more for minority groups than whites. Similarly, affluence increased substantially for all groups—indicative of rising living standards—and in relative terms more for minority groups than Whites (though some absolute gaps increased). The increases in living standards were more prominent in the earlier decades of the study period than since 1999. Blacks and American Indians have the highest rates of poverty, followed closely by Hispanics, while Asians and Whites have relatively low poverty rates, with the lowest rate among Whites. Blacks, American Indians, and Hispanics have the lowest rates of affluence. Notably, Asians reached parity with Whites in affluence in 1979 and had surpassed them by 2015 (see Figures 1 and 2). 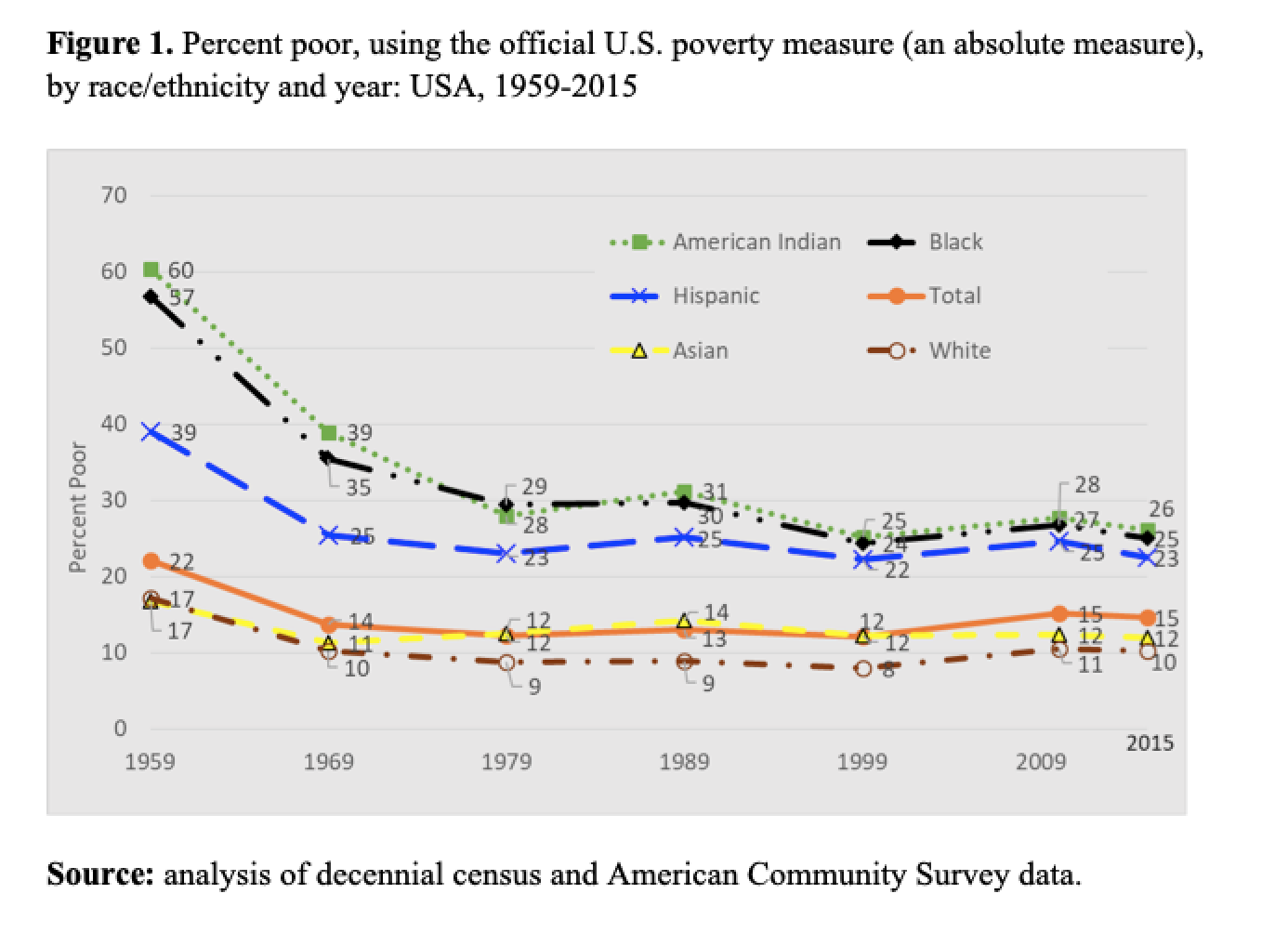 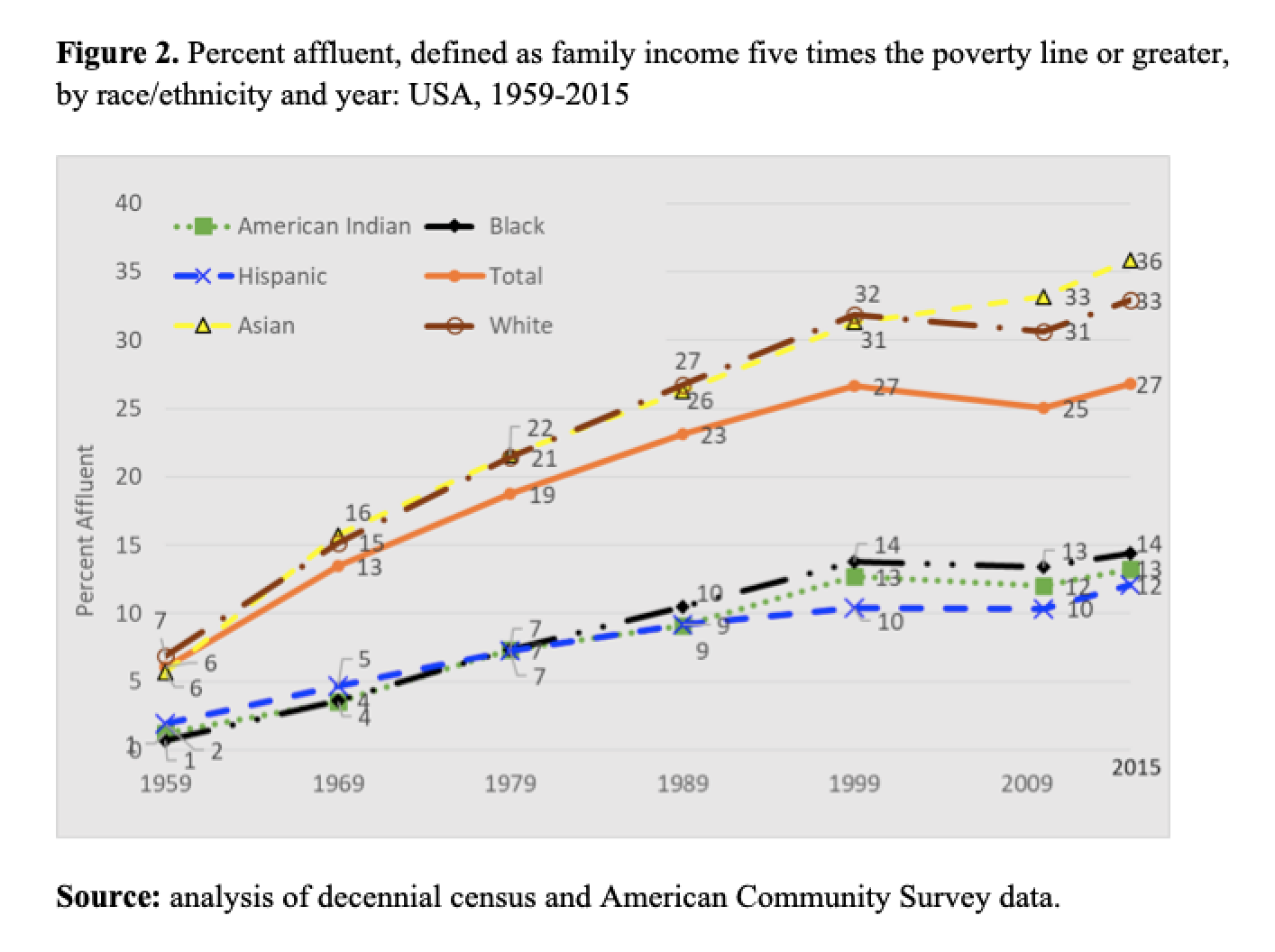 The role of group characteristics in explaining patterns and trends

I use demographic decomposition analyses to examine the extent to which sociodemographic characteristics explain differences in poverty and affluence across groups. These characteristics, such as education, family structure, and nativity explain some of the disparities—and an increasing proportion over the 1959 to 2015 period—indicative of the growing importance of disparities in human capital, the immigrant incorporation process, and shifts in household living arrangements in explaining racial inequality in poverty and affluence. For example, the proportion of the difference in poverty between Blacks and Whites explained by these characteristics grew from just under half in 1959 to two thirds in 2015. Among some groups, such as Hispanics, the increase was larger (31 percent to 92 percent over the period) while in other groups, such as American Indians, it was smaller (42 percent to 53 percent from 1959 to 2015). The increase in the explained proportion of group differences was generally larger when considering poverty than affluence, and in one instance—the difference in affluence between Whites and American Indians—there was a small decline in the explained percentage of the gap (73 percent in 2015, down from 80 percent in 1959).

Turning to the role of specific characteristics, among Hispanics and Asians, education and nativity were consistently important factors in explaining differences from Whites. For Hispanics, education was particularly important and its role increased over time. Among Asians, education was a “protective” factor—if Asians had more resembled Whites in terms of education, the disparities in poverty would have been larger. Nativity was important for both groups, especially with regards to poverty, as the foreign-born are consistently more likely to be poor and less likely to be affluent than the native born. Selective immigration from Asia likely helps explain better socioeconomic outcomes of Asians in the United States, combined with the emphasis immigrant parents place on schooling for their children (Hsin & Xie, 2014). While Asian immigrants are positively selected on education, the same is not the case for Hispanics, especially immigrants from Mexico, who come with relatively low levels of education (Feliciano, 2005). For Hispanics, then, future patterns of poverty and affluence will depend on the extent to which they continue to experience upward socioeconomic mobility across generations, which other studies have documented (Park & Myers, 2010).

The effect of family structure grew in importance and Became the most significant factor among Blacks—explaining about a third of the disparity with Whites in poverty and affluence in 2015. This reflects the relatively large decline in marriage among Blacks, as people living in married couple families are much more likely to be affluent and less likely to be poor than people in other household living arrangements. Among American Indians, several factors were important, including education (generally the most important), family structure, and, depending on the outcome, family size, age, or metropolitan status. Thus, it appears that cumulative disadvantages are important for American Indians, who are more likely to have lower levels of human capital, live in single parent families and in nonmetropolitan areas, and have a younger age structure than Whites.

Some of the gaps between groups remain unexplained by the factors included in the analysis, though the magnitude of the unexplained gap generally declined over time, as noted above. The presence of an unexplained difference in analyses of these kinds of survey data is sometimes attributed to discrimination (Snipp & Cheung, 2016). This may be the case in my study, though it is important to note that there are many other unobserved factors in the analysis as well, including neighborhood conditions, social capital, and cultural capital—all influenced by race-related factors, such as racial and ethnic segregation. Nevertheless, the findings suggest that these types of factors played a smaller role in explaining racial and ethnic disparities in poverty and affluence over time.

This study had a few limitations. The use of cross-sectional data precludes making strong causal inferences about the effect of the variables of interest, such as family structure, on poverty. Family structure can be both a cause and reflection of poverty. Some factors, such as educational attainment, can be affected by racial inequality. Thus, this study mainly sheds light on the individual- and household-level factors associated with poverty and affluence, and how differences in these characteristics across racial and ethnic groups might reflect and contribute to differences in the prevalence of poverty and affluence.

A picture with shadows and light

In summary, the findings suggest a moderate decline in racial inequality in poverty and affluence in the United States over the 1959 to 2015 period. However, despite some narrowing of the racial gap and the general parity between Whites and Asians, larger disparities remain among other groups. There are many causes for these continued disparities, and the relative importance of each varies across groups. Among these factors are racial discrimination in the labor market, which reduces employment and wages of some minority group members. The increase in incarceration in the late 20th century also served to reduce human capital and wages, among black men in particular, and these show up in higher poverty rates and lower rates of affluence among Black families. The legacy of historical inequalities may also play a role, as there is a fair amount of intergenerational transmission of socioeconomic status in the United States (Isaacs, 2008). Differences in social and cultural capital, social and spatial isolation, and culture may also help explain some of the differences (Iceland, 2017).

A final contribution of this study is to highlight that, despite substantial gaps across groups, all groups experienced an improvement in their absolute socioeconomic attainment over the 1959-2015 period. Among Blacks, for example, the percentage who were poor declined from 57 percent in 1959 to 25 percent in 2015, while the percentage who were affluent grew from under 1 percent to 14 percent over the same period. Given the differences in the nature of the disparities among the groups, including the change in the factors that have contributed to them over time, it is important to avoid simplistic explanations about the causes of racial inequality in the United States that do not account for important social, economic, and demographic changes over the past 60 years.

Isaacs, J. B. |Sawhill. I. V. |Haskins. R. (2008). Getting Ahead or Losing Ground: Economic Mobility in America. Brookings Institution. Retrieved from