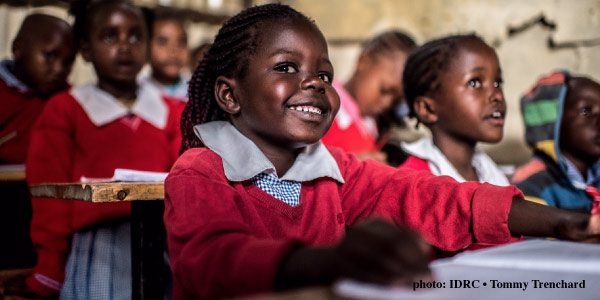 Is there need for subsidized center-based childcare in Africa?

When women make decisions on whether to engage in paid work, they weigh the costs of childcare against their potential earnings. Research from other areas of the globe provides consistent evidence that subsidizing daycare services mitigates this “wage tax” for women and improves their employment opportunities. Yet, some policy makers and scholars dismiss the need, or even desire, for subsidized center-based daycare for women in Africa. This skepticism is based on the assumption that African women can rely on extensive female kin networks for free childcare or easily engage in paid work in agriculture or the informal sector while caring for young children. In informal settlements, however, many mothers appear to require assistance with childcare as roughly 80% of children aged 3 to 6 years are enrolled in a private daycare center (Bidwell & Watine 2014). Nonetheless, mothers often struggle to pay the user fees associated with private childcare and others worry about the quality of available daycare options.

We set out to explore whether the cost and quality of center-based childcare influence its use among mothers in Korogocho, an informal settlement of Nairobi, Kenya (Clark et al 2019). The baseline for this randomized control study was conducted between August and October 2015 and was followed by an endline survey one year later (August to October 2016). We selected nearly 850 mothers with at least one child between the ages of 1 and 3 years, who were not using formal daycare services. A third of the mothers received vouchers to subsidize the cost of sending their child to a regular daycare center, one-third were given vouchers to attend a quality-improved daycare center, and the remaining mothers received no vouchers. Figure 1 reveals considerable demand for center-based daycare, with more than half of mothers (57.7%) who received no financial assistance starting to use these services as their children aged. In contrast, over 80% of mothers who received a voucher for either regular or quality-improved daycare centers were using these facilities, indicating that almost a quarter of mothers were unable to send their children to daycare because of limited funding. The lack of a significant difference in daycare use for mothers using quality-improved centers or regular centers indicates that cost – more than quality – is a major barrier to access to formal childcare services. 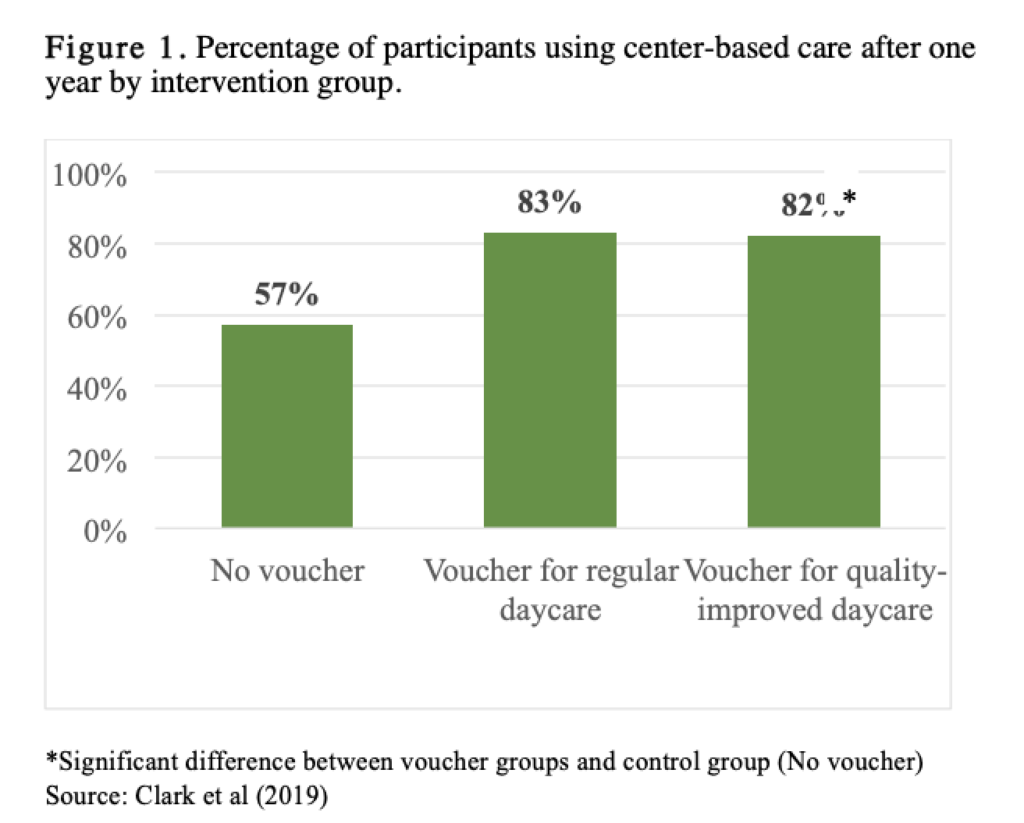 Studies from North America, Europe, and Latin America have consistently demonstrated that costs of childcare impede mothers’ employment opportunities (Berlinski et al. 2011; Lefevre and Merrigan 2008). Our study confirms that this is also true for Kenyan mothers living in an informal settlement. Figure 2a demonstrates that women who received vouchers for childcare were 8.5 percentage points (or 17%) more likely to be employed than women who did not receive subsidized childcare. Among women who used center-based childcare, those who received the voucher for subsidized childcare were 30.5 percentage points more likely to engage in paid work. Figure 2b reveals that mothers who received daycare vouchers also earned more money. On average, mothers with access to subsided childcare experienced a 24% increase in earnings (about $6 USD or 619 KES, Kenyan Shillings, per month). Importantly, they were able to earn this extra income without increasing the number of hours they worked per week (Figure 2c), which suggests that they were able to seek better paying jobs. Mothers in qualitative interviews further explained that they could be more efficient because they were less distracted and able to work with more regular hours if they had access to subsidized childcare. Analyses by marital status revealed that most of the gains in employment were experienced by married mothers, while single mothers (most of whom were already working) benefited from access to free childcare by being able to reduce their long working hours without loss of income. 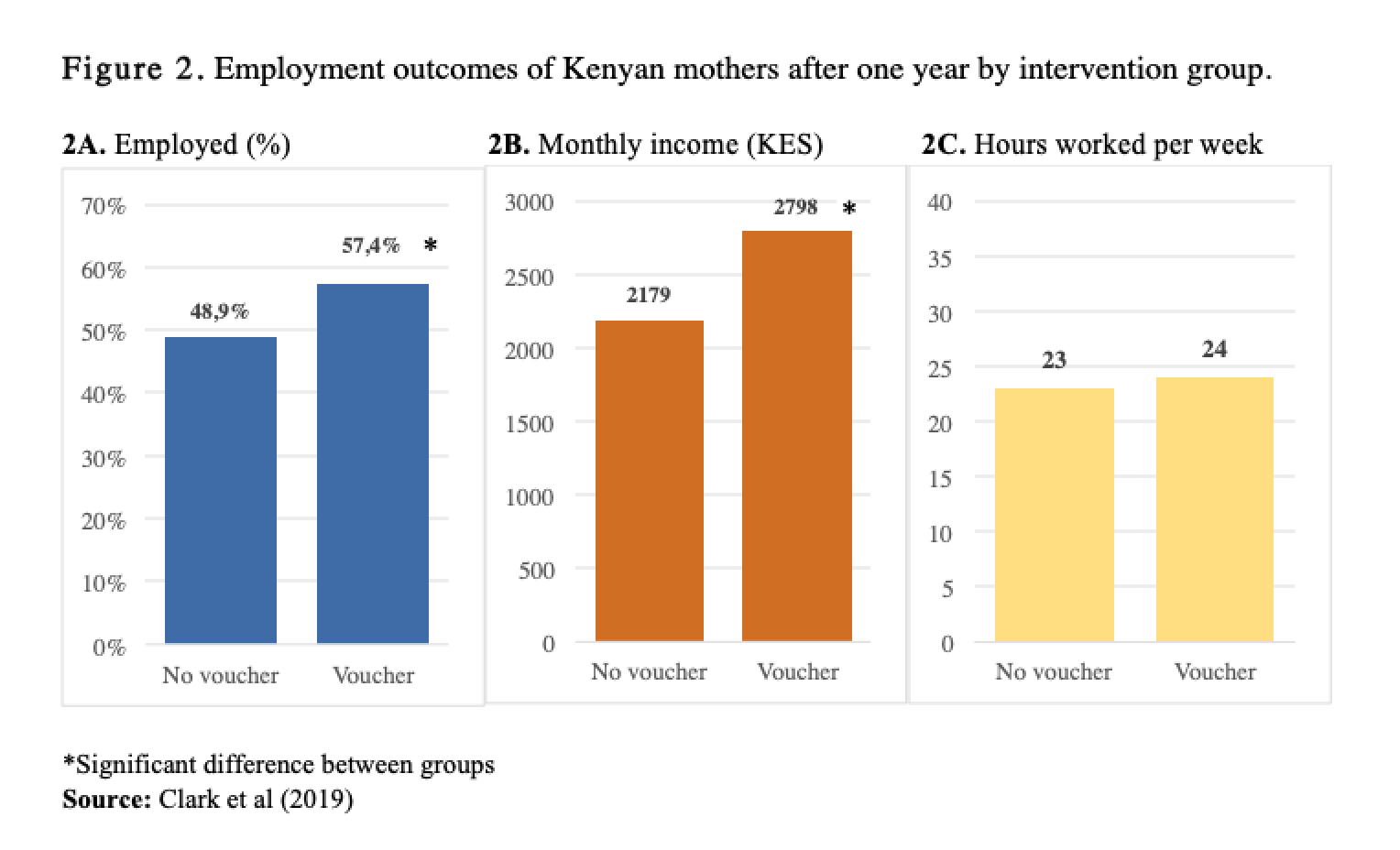 What was unaffected by subsidized childcare?

Women’s economic empowerment is not limited to their employment and earnings, however. Instead, it reflects whether women have the resources, agency, and ability to set and achieve their goals (Kabeer 2005). With the exception of decisions pertaining to child health, mothers in our study with free access to daycare did not report significantly greater involvement in other important household decisions, suggesting little impact on their overall autonomy. Nor did free childcare influence women’s short-term fertility intentions or behaviors. One may anticipate that reducing the costs of raising children could lead to higher demand for children or, conversely, that women’s greater enrolment in the workforce would increase the costs of children and, hence, lower fertility desires. However, neither effect occurred over the short duration of this study.

Why subsidize childcare in sub-Saharan Africa?

Additional studies are required to examine whether our findings are replicable and generalizable to other populations in sub-Saharan Africa. Nonetheless, they contribute to the growing literature which notes several possible benefits of subsidizing daycare, including:

In sum, as in other regions, providing free daycare services could have numerous social, health, and economic benefits for women, their children, and the wider economy across Africa. Moreover, the need for private childcare centers is likely to increase with rising urbanization and greater female employment in the service and manufacturing sectors. Amidst the growing recognition of the global childcare crisis and mounting calls for subsidized childcare, the continent of Africa should not be overlooked (Samman et al. 2016).