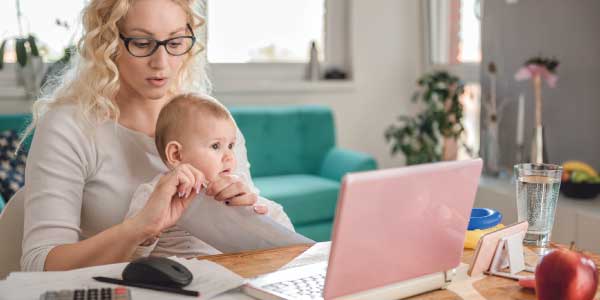 A key aspect of the digital revolution that has modified lives at the beginning of the twenty-first century is the rapid diffusion of the Internet, and access to high-speed (broadband) Internet in particular. The profound social and economic implications of the Internet’s spread have been underlined by social science scholars since its inception (DiMaggio et al. 2001). More recently, researchers have also started to focus on the effect of the Internet on family life, in terms of both daily and longer-term schedules.

In a recent study (Billari et al. 2019), we investigate whether the diffusion of high-speed Internet has an impact on fertility in a low-fertility setting, that of Germany, a country where the total fertility rate has remained stable at around 1.35 children per woman for several years now. Related empirical studies have focused on the effect of the Internet on marriage rates (Bellou 2015), labour force participation of married women (Dettling 2017), and teenage fertility (Guldi and Herbst 2017) in the United States. But little is known about the effects of Internet on general fertility, of both sexes, and outside the US.

We use data from the German Socio-Economic Panel (SOEP), a longitudinal panel dataset about the German population. These data are uniquely suited to studying the effect of broadband diffusion on fertility. First, they contain retrospective life course information, including fertility histories. Second, they contain household information not only on Internet access, but also on access via broadband technology (digital subscriber line, DSL). This information is exploited to build our key explanatory variable. Lastly, the SOEP also contains rich information on individuals’ life courses and conditions, including working from home, other labour market behaviour, time spent on childcare, and life satisfaction; thereby enabling us to shed light on the potential mechanisms whereby high-speed Internet access may affect fertility.

The (causal?) association between home broadband Internet access and fertility 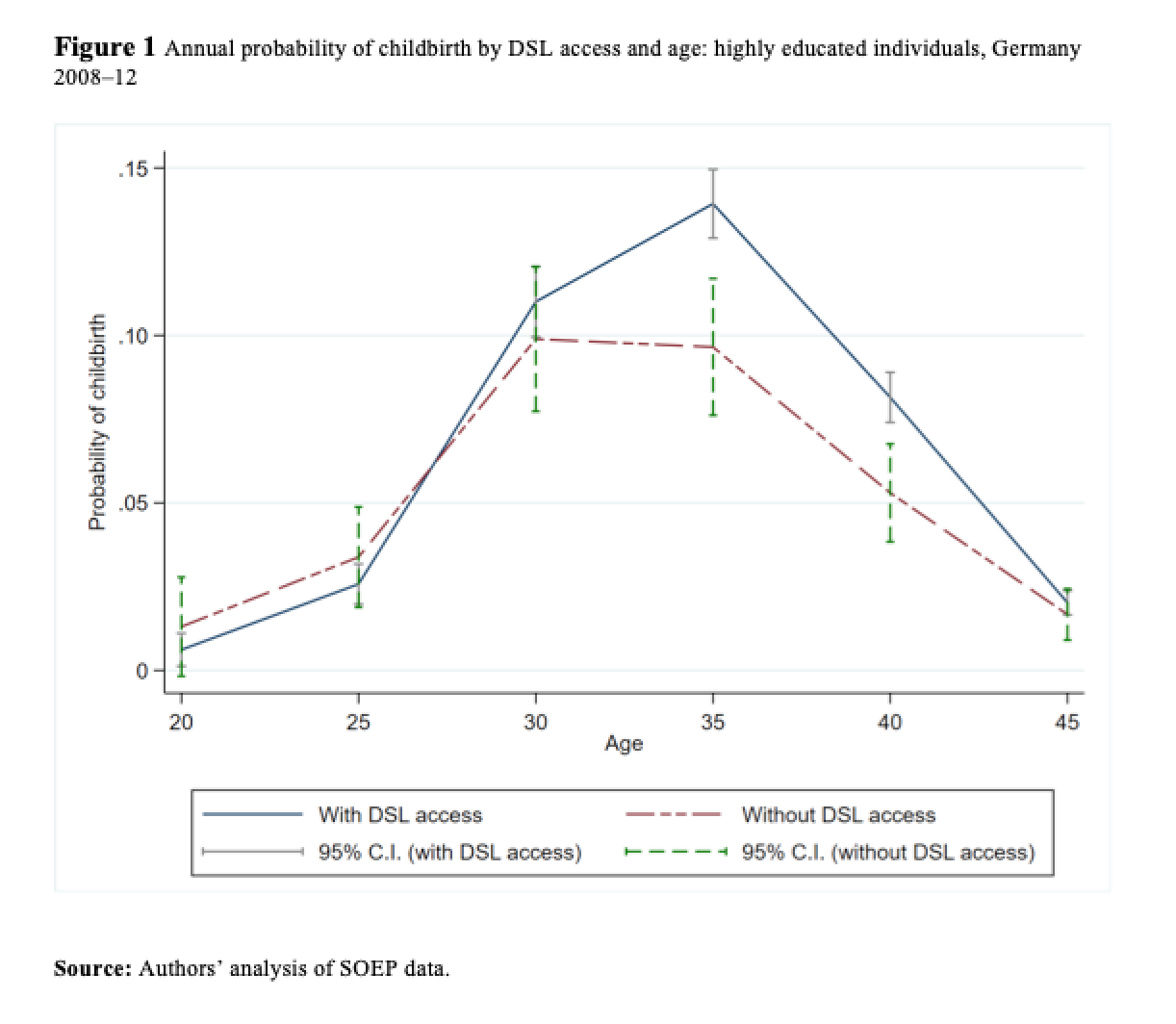 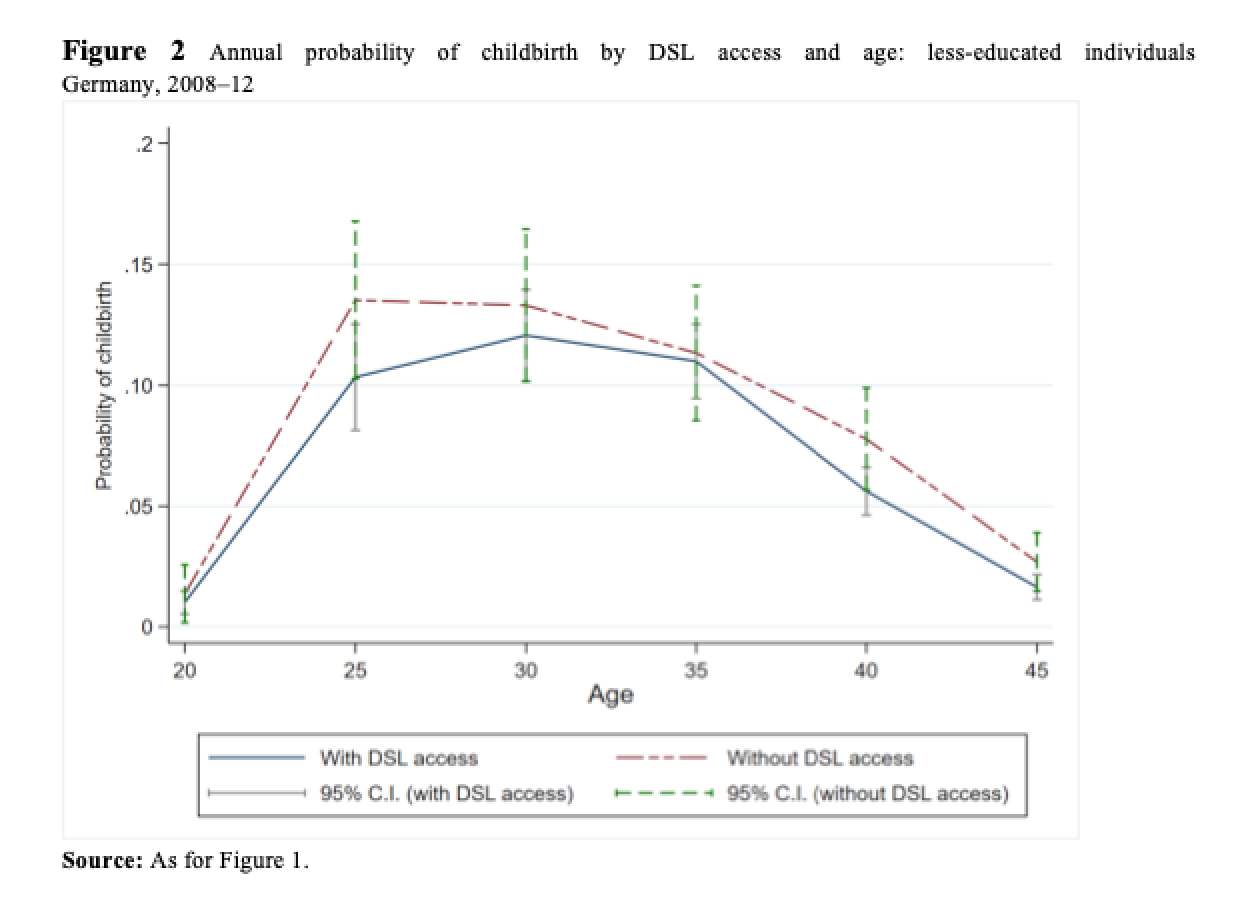 We exploit an instrumental variable (IV) strategy (along the lines suggested by Falck et al. 2014) to investigate whether DSL availability has causally increased fertility. Table 1 provides the results of this analysis by education group for individuals aged 25-45. We find a positive and significant effect of DSL on fertility only among highly educated women (see column 3), whose fertility is thus increased by about 13.3 percentage points. The effect is also positive among highly educated men (7%), but is not statistically significant. Finally, the coefficient is negative, and, again, not significant, among the less educated.

What might be the factors underlying the relationship between broadband use and fertility? Taking into account the relevant literature, the Internet may affect fertility through three main mechanisms: information, marriage, and work-family balance.

Broadband access may also affect fertility through its potential effects on marriage (Bellou, 2015). We find a positive but non-significant relationship between access to high-speed Internet and the likelihood of marriage for highly educated women aged 25-45 (see column 1 of Table 2). 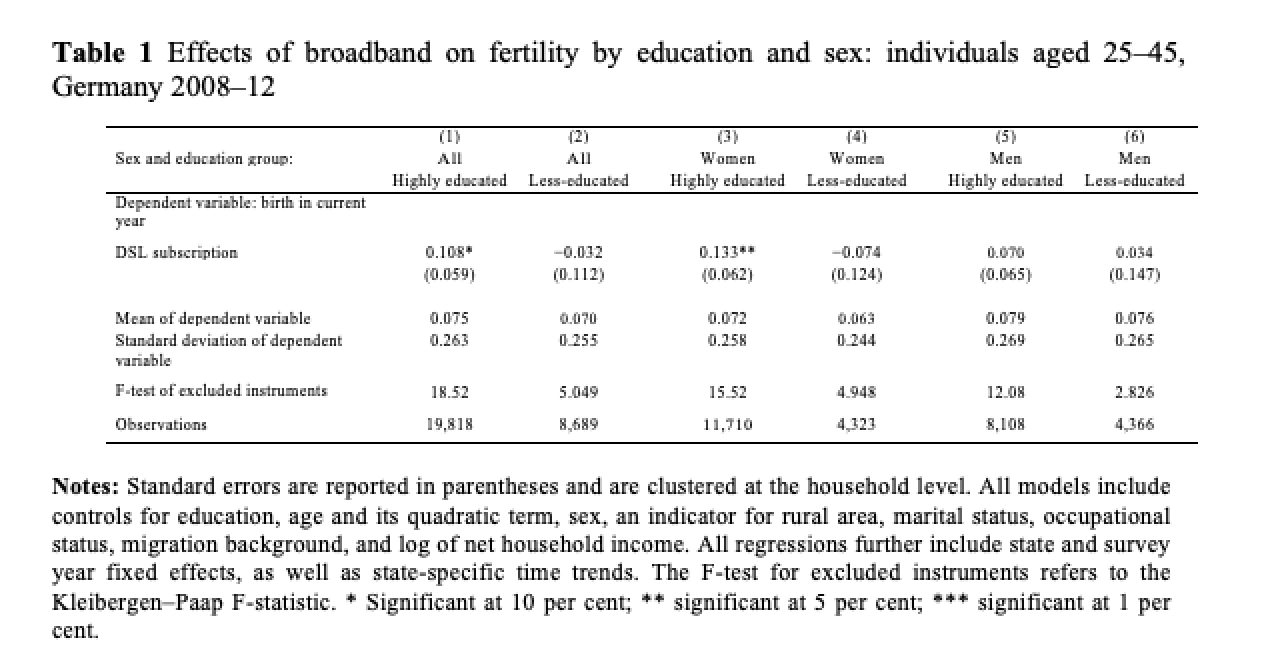 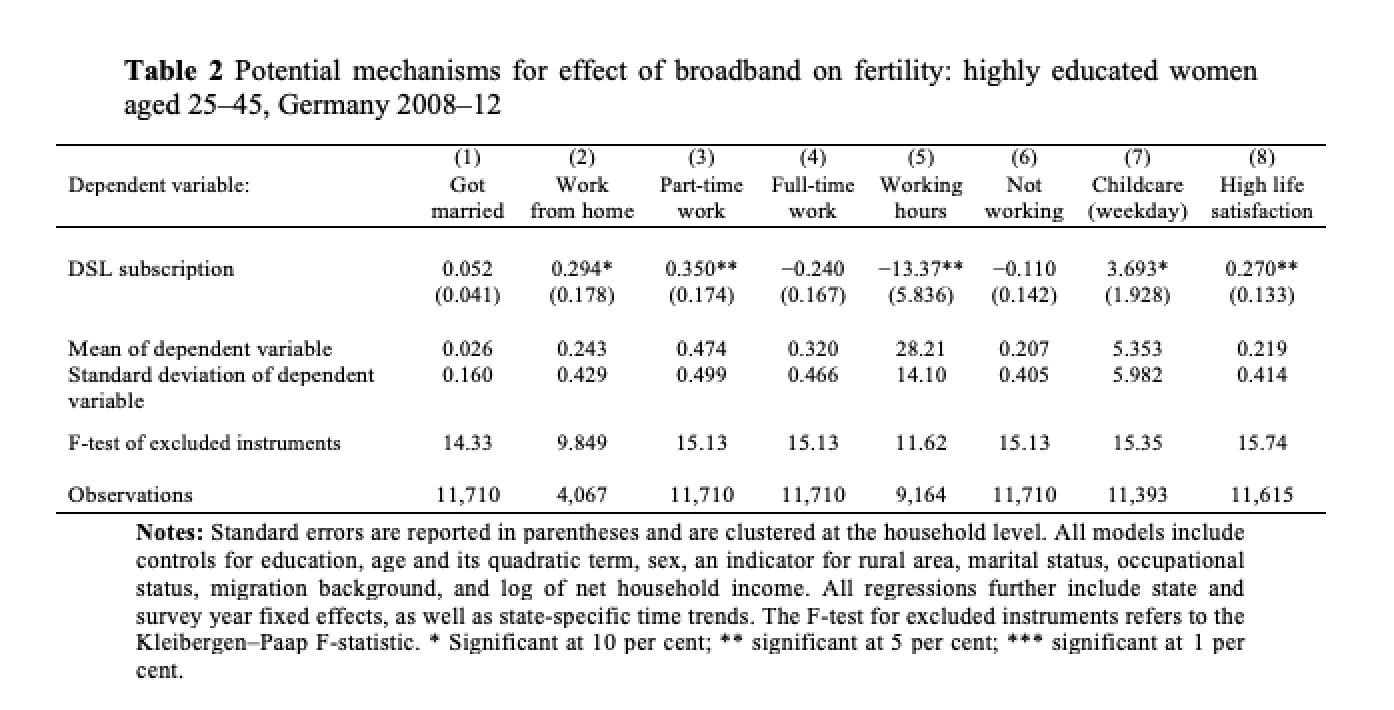 With regard to the third mechanism, DSL technology provides individuals with more opportunities to do at least part of their work from home, thereby relaxing time constraints, especially among more educated women, and favouring the work-family balance (Dettling 2017). To test this hypothesis, we analyse the effects of DSL access on the likelihood of reporting any work from home, the likelihood of part-time vs. full-time work, working hours, and employment status, among highly educated women aged 25-45. In column 2 of Table 2, we find evidence that high-speed Internet increases the likelihood of working from home by 29.4 percentage points. Columns 3 and 4 suggest that access to DSL encourages part-time vs. full-time work. Consistent with this, in column 5 we find that the overall number of hours worked decreases with broadband access. While the point estimate in column 6 suggests a positive effect of broadband on female employment, there is no evidence of a significant effect. In columns 7 and 8, we also find that access to DSL significantly increases time spent on childcare and the likelihood of reporting a high level of life satisfaction.

Overall, our findings suggest that increasing access to high-speed Internet may promote fertility among highly educated women by easing the burden of balancing work and family duties. This may be particularly important in countries such as Germany, which lag behind other advanced economies in terms of their share of telecommuters (Brenke 2016). The downside of our findings is that broadband might introduce a “digital divide” in fertility, allowing highly educated individuals to reach their fertility goals, while not improving the chances of less-educated individuals, who tend to be employed in less flexible occupations.

Bellou, A. 2015. “The impact of Internet diffusion on marriage rates: evidence from the broadband market”, Journal of Population Economics 28(2): 265–297.