The Healthy Immigrant Effect (HIE) refers to the recurring finding that people who have just moved to a new country have better health and lower death rates than the native population there. Over time, however, the health and mortality of these migrant populations become more like those of natives. Such a finding is often considered ‘paradoxical’, as migrants in the host country occupy lower socioeconomic positions (e.g. they have lower educational levels, lower incomes and lower-skilled jobs), on average, than natives. This conflicts with the long-held belief that lower socioeconomic positions are associated with poorer health and higher risks of death. Central to explaining this paradox is migrant selection, i.e. the notion that those who move are not simply ‘average’ members of their origin population; they are better educated, wealthier and more highly skilled than the ‘typical’ members of the population that they leave behind.

The problem of measuring selection in the countries of origin

However, this selection process is difficult to capture as it requires detailed and comparable information on migrants’ experiences in both the host and origin countries. As a result, most studies only compare the characteristics of migrants with those of natives in the host country. This tells us little about the level and effects of migrant selection. Crucially, this comparison ignores two facts: first, that migrants’ health is a combination of their previous life experiences in the origin country and current life experiences in the host country; and second, that a given socioeconomic position in one country as determined by a certain level of, say, education is unlikely to equate to the same position in another. If we only consider socioeconomic position as measured in the host country, we ignore the formative part of migrants’ lives that determined their health just before they migrated and risk underestimating migrants’ previous social standing in their origin country. Consequently, we are liable to overestimate migrant-native health differences.

In a recent study (Ichou and Wallace 2019), we directly tested migrant selection as an explanation of the HIE among migrants in France. Using data from the French Trajectories and Origins survey (a large-scale survey of migrants and their children in France) and the Barro-Lee dataset (which contains educational attainment data for 146 countries in 5-year intervals from 1950 to 2010), we reconstructed a direct measure of immigrants’ educational selectivity, as previously developed by Ichou (2014). In short, this measure of ‘relative educational attainment’ re-positioned immigrants in the distribution of educational attainment of the population of the same cohort and gender in the origin country. Placing immigrants’ education in the context in which it was attained enabled us to capture broader dimensions of education and SES that are crucial in determining the health of migrants prior to their arrival.

First, for all migrants combined, we showed that migrants are very positively selected in terms of their education level (largely originating from above the 80th percentile in the education distributions of their origin country). Figure 1 shows that migrants from North Africa to France were, on average, positively selected in terms of education from the origin country, with some selection from the middle-lower end of the distribution. On the other hand, migrants from South Europe were, on average, neither positively nor negatively selected. Such variation shows the considerable diversity within immigrant populations in France. 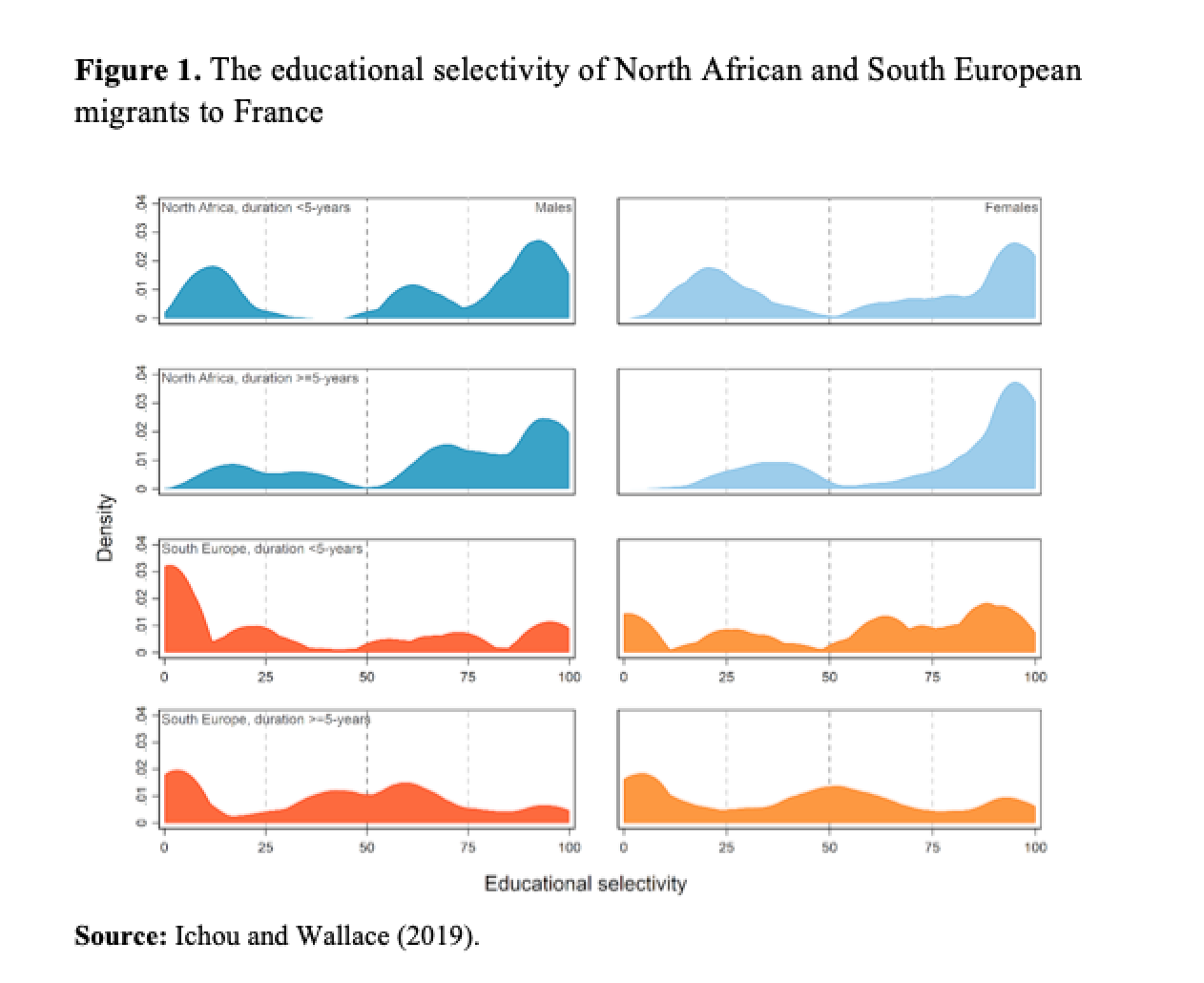 We then tested the effect of this educational selectivity on the size of health disparities between immigrants and natives using three health measures: self-rated health, health limitations and chronic illnesses. For all migrants, those with shorter durations (0-4, 5-9 years) were clearly advantaged in terms of chronic illness (both sexes) and self-rated health (males only). Patterns in the longest duration group (10+ years), on the other hand, were similar to those of natives. As Figure 2 shows, while North African migrants (especially males and recent arrivals) had a health advantage relative to natives born in France, this was not the case for South European migrants in any of the three outcomes. Importantly, although educational level as measured in the host country could not explain these health differences, adjusting for their level of educational selectivity helped explain the Healthy Immigrant Effect in France. 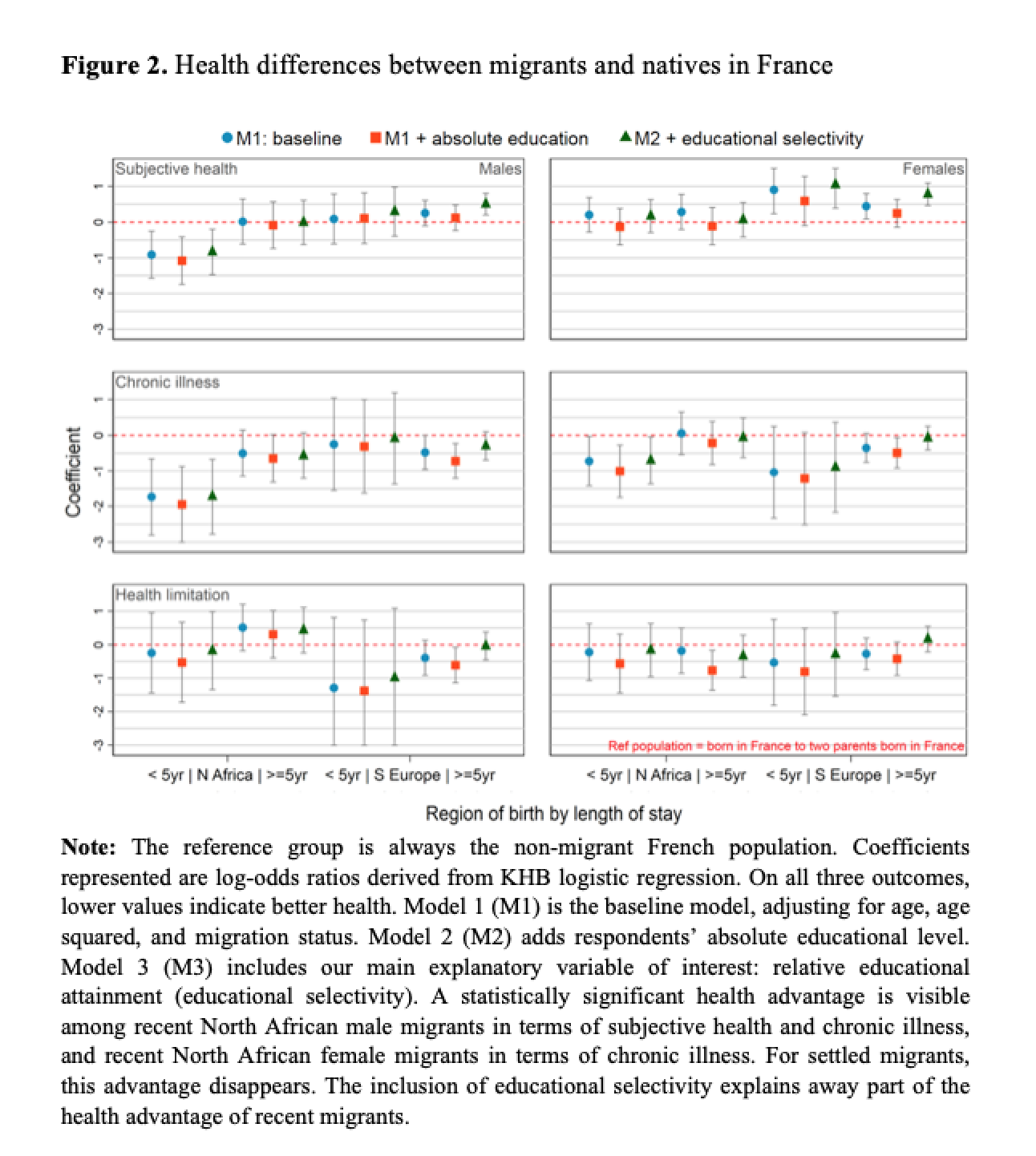 Overall, the study showed that immigrants in France were positively selected in terms of educational attainment in their country of origin, which translated into better health (relative to natives) in the country of destination. In accordance with the UCL-Lancet report (Abubakar et al. 2018), this suggests that rather than damaging health, migrants likely add some value to overall population health.

The better health of migrants does not last

Of course, certain subgroups may require specific health policies. A concerning and common finding was a weakening or loss of the health advantage in groups who have stayed longer in the host country. Among North African males, for example, although the long duration group was at least as positively selected as the short duration group, they had no health advantage. Indirectly, this tells us that time spent in the host country can have a detrimental impact upon immigrants’ health. This may simply reflect an inevitable attenuation of initial selection effects over their duration of stay in France. Or it could be indicative of the adverse effects of exposure in the host country to discrimination or less favourable social conditions than natives.

Ichou, Mathieu (2014), “Who they were there: immigrants’ educational selectivity and their children’s educational attainment”, European Sociological Review, 30(6), p. 750-765. x