The role of uncertainty is increasingly seen as crucial for understanding migration decisions in low-income countries. When income is pooled within the family, internal migration by some household members can be an effective tool to diversify the household’s income across different sources, thereby reducing its overall risk.

In spite of its potential relevance, empirical analysis of the risk-mitigating aspects of migration is still very limited due to the difficulty of controlling for the endogeneity of the migration decision, and the lack of experimental data. We adopt a stochastic outcome approach to examine how migration may have contributed to reducing household vulnerability. Specifically, we follow Chaudhuri (2000); Chaudhuri, Jalan, and Suryahadi (2002); and Günther and Harttgen (2009), and estimate the reduction in the household’s vulnerability to expected poverty (VEP) to measure the effects of migration on family welfare (Pietrelli and Scaramozzino 2019).

We use a comprehensive data set from surveys carried out over the period 2004–2010 in Kagera, the remote north-western region of Tanzania. Individual household members are tracked over time, and the migrants’ destinations are recorded. Additional characteristics of both the original family and the new family in the destination region are also recorded. It is thus possible to measure changes in the vulnerability of the original household in a fully dynamic setting.

The analysis was conducted on two samples of households: an extended sample of 1,238 households including all those that split off in 2010, as well as a restricted sample of 881 households with the same head in the two periods. The impact of migration can thus be tested on the entire network of households.

We are able to identify the risk-reducing effects of migration thanks to an extreme meteorological event that took place in Tanzania. The country has two rainfall regimes: unimodal (which covers the areas in the south, center, and west) and bimodal (in the north, the northern coast, and the north-west) (Figure 1). The unimodal regions have only one long rainy season during the agricultural year, whereas the bimodal regions have two short rainy periods. During the 2008–2009 season, the bimodal regions suffered an extreme drought. This shock affected eastern African countries and was described as “one of the worst in living memory” (IDRC 2010). However, unimodal regions were not affected. We look at this extreme natural event to examine how households in the region of origin were affected by the migration of household members. Specifically, we examine whether households whose members had migrated to a unimodal region of the country experienced a significant reduction in their VEP relative to households whose members had migrated to a bimodal region affected by the drought. 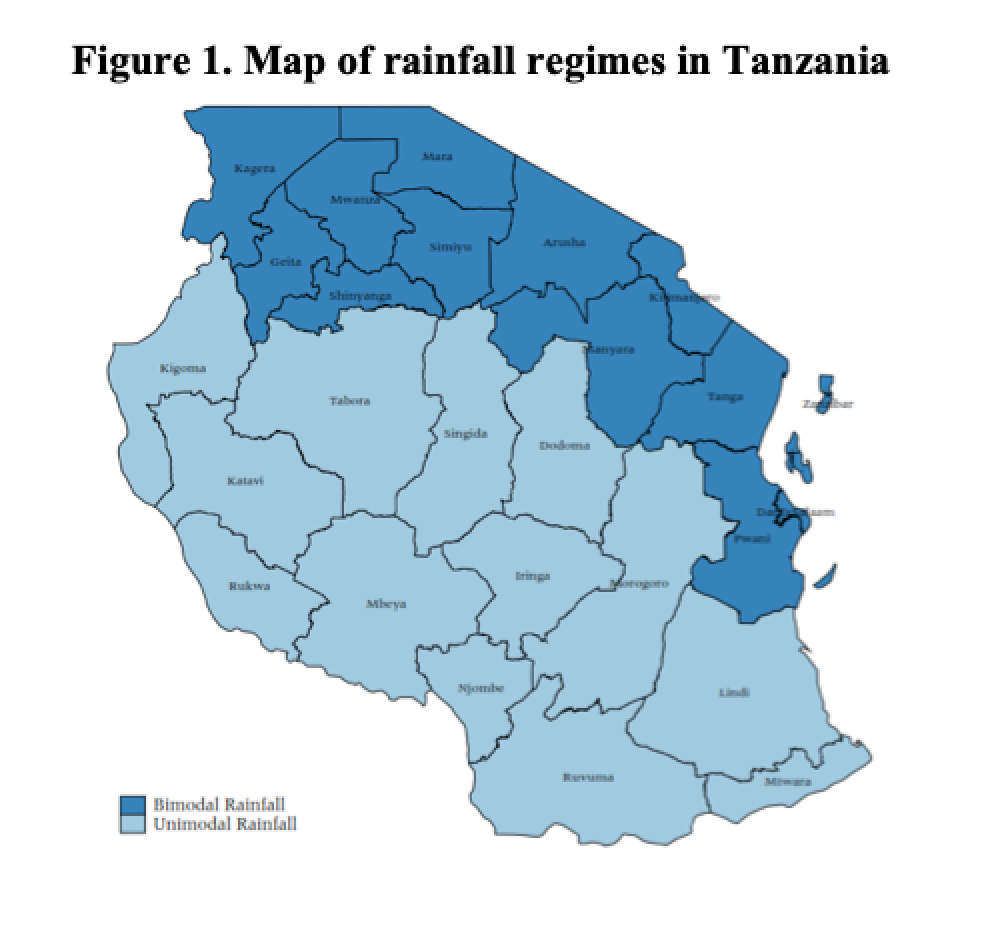 The main empirical results are consistent with the interpretation that migration is an insurance mechanism for the household. We first adopted a matching approach to examine the differential changes in the vulnerability to basic needs and food insecurity by households with and without migrants, and showed that migration by some family members significantly reduced the vulnerability of the household of origin. 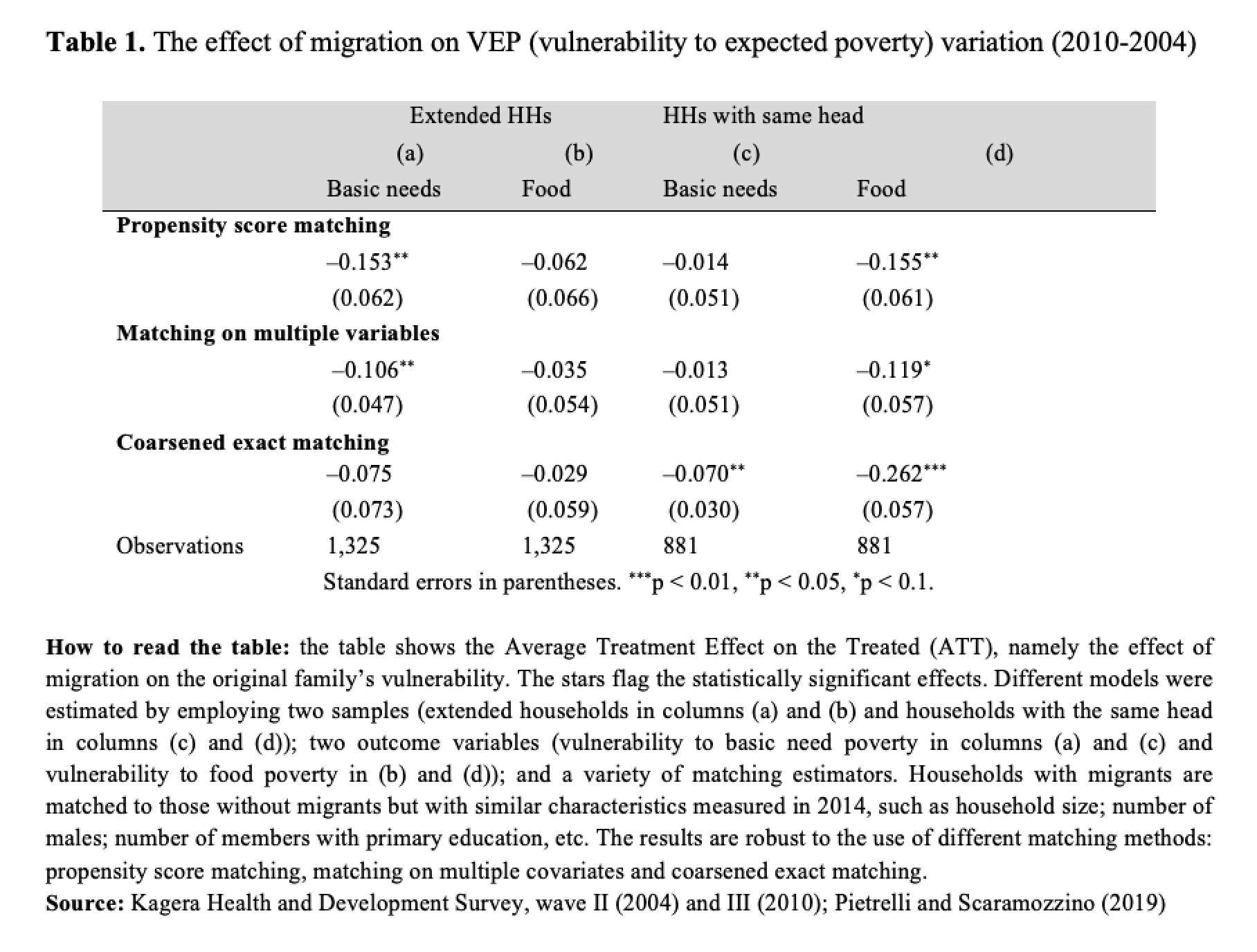 Next, we exploited the “natural experiment” of the drought in the bimodal meteorological regions in Tanzania to control for time-varying, unobserved heterogeneity, and observed that migration to the drought-free unimodal zones resulted in a significant decline in vulnerability for the household of origin. These novel empirical results show that migration did enable households to mitigate their risks (Table 2). 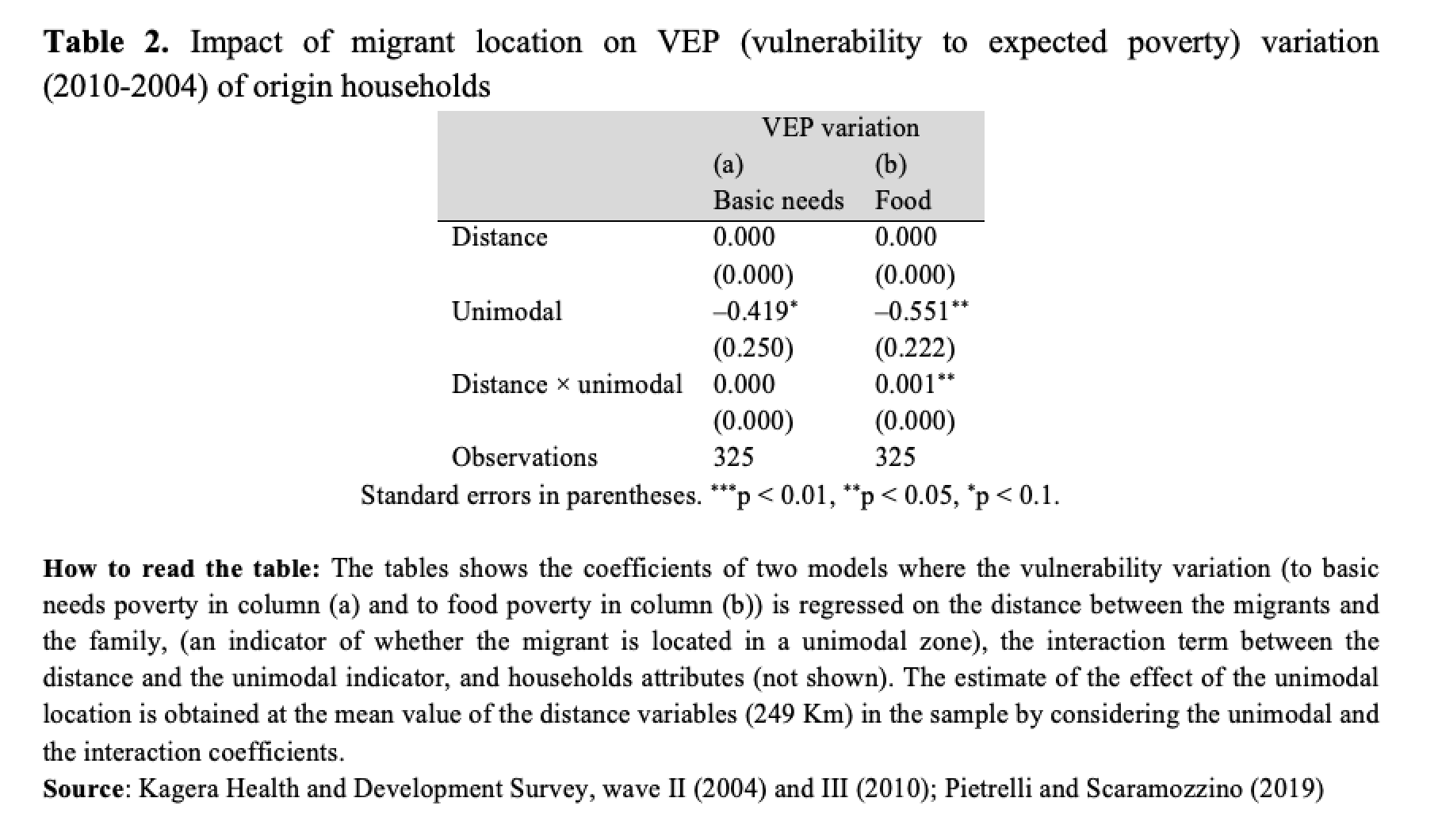 Our results are consistent with those of Hirvonen and Lilleør (2015) and De Weerdt and Hirvonen (2016), who used the same data set for Kagera. Hirvonen and Lilleør (2015) established the existence of links between migrants and their home communities, both during the migration spell and following return migration. De Weerdt and Hirvonen (2016) found evidence that migrants feel an obligation toward family members who remain at home, consistent with social norms associated with kinship (Lévi-Strauss 1969). Those who remain at home benefit from the migrants’ positive shocks and receive some insurance against their own negative shocks, but do not suffer from the migrants’ negative shocks.

By using matching methods and by exploiting an exogenous variation due to an unanticipated drought which only affected regions with a bimodal rainfall pattern, our paper shows that migration reduced vulnerability to basic needs and to food consumption poverty for families with members who migrated to unimodal regions. This evidence supports the view that migration served as an effective risk management strategy for households.