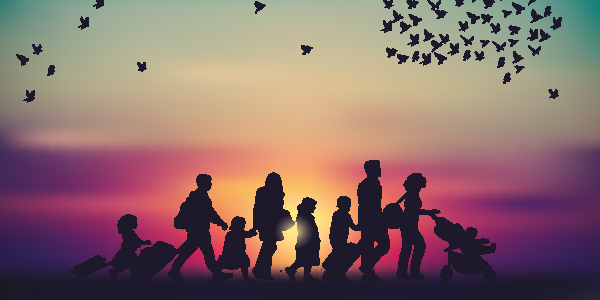 The mortality of immigrants, even those from poor countries, is lower than that of natives, even in rich receiving countries. In this article, Matthew Wallace examines whether this advantage is real or a data artefact. He finds that migrants do have lower death rates, but that data biases explain some of the advantage. He also suggests a need for national decision makers to reassess the systems used to monitor the mobility of resident populations.

The migrant mortality advantage is the name given to the observation that international migrants tend to have lower death rates than the native population in the receiving country (Ichou and Wallace, 2019). While this phenomenon is regularly observed in high-income countries, researchers are unable to reach a consensus regarding its origins; some argue that the advantage is real, while others see it as artefactual.

For the former, lower migrant mortality is considered genuine and generated by processes such as selection – the idea that people who move are healthier and more highly educated than those they leave behind – and cultural factors – the idea that migrants tend to practice less-risky, health-promoting behaviors. For the latter, lower migrant mortality is considered artificial and borne out of the inability of national data systems and surveys to adequately capture the mobility of migrant populations. The resulting errors lead to migrant death rates that appear to be lower than they actually are.

At the individual-level, capturing emigration poses the greatest challenge. There is little incentive to register an exit from a country and there is rarely a legal requirement to do so. Consequently, we do not always know when – or if – migrants have left the host country. This contrasts with immigration, for which registration is required so that new arrivals can receive ID numbers, granting them access to the job market, social security, and healthcare.

The two main problems arising from missing emigration data are censoring bias and salmon bias. Censoring bias refers to the inability to identify and remove emigrants from risk populations upon which death rates (or other demographic outcomes) are based. If someone makes an unregistered exit from the host country and there are no markers to identify this event, they are still considered to be ‘at risk’ of death in the host country even though they have left and may have died elsewhere. This artificially depresses death rates because the numerators (number of deaths) are deflated and the denominators (number of people or person-years) are inflated. Salmon bias suggests that those who leave are negatively selected in their health i.e. they are frailer and more likely to die than the migrants who remain in the host country. This leads to depressed death rates because average death rates of the migrants would be higher if both stayers and leavers were fully accounted for.

Wallace and Kulu (2014) have previously investigated censoring bias among migrant populations living in England and Wales. In the absence of complete information on emigration from these two countries, the authors ‘filled in the blanks’ using information from censuses, National Health Service records and civil registers to identify unregistered emigration from England and Wales. Having identified possible emigrants, they then conducted a series of sensitivity analyses around the date of emigration (imputing dates based upon dates of those who registered their exits) to show that censoring bias contributed to, but could not fully explain, the migrant mortality advantage. However, because migrant death rates can remain depressed even after correcting for censoring bias (i.e. if emigrants are negatively selected by their health status), it was also necessary to identify and correct for a potential salmon bias effect.

Using the same data, Wallace and Kulu (2018) studied the probability of migrants leaving England and Wales in bad health. Figure 1 shows results from separate discrete-time survival models examining the migrant mortality advantage (top) and salmon bias effect (bottom) among migrant females (left) and males (right). From the top two panels, we can see that nearly all migrant groups experience a migrant mortality advantage, i.e. they have lower relative mortality than the England and Wales-born. From the bottom two panels we can see that migrants in three groups (India, Pakistan and Bangladesh, and Caribbean) show evidence for a salmon bias i.e. were more likely to leave England and Wales in poor health. Given that emigration in the other groups was not selective and all but those from the ”Anglo-Saxon group” (US, Canada, Australia and New Zealand) experienced a migrant mortality advantage, we can conclude that the advantage of these groups is real and not caused by biases. 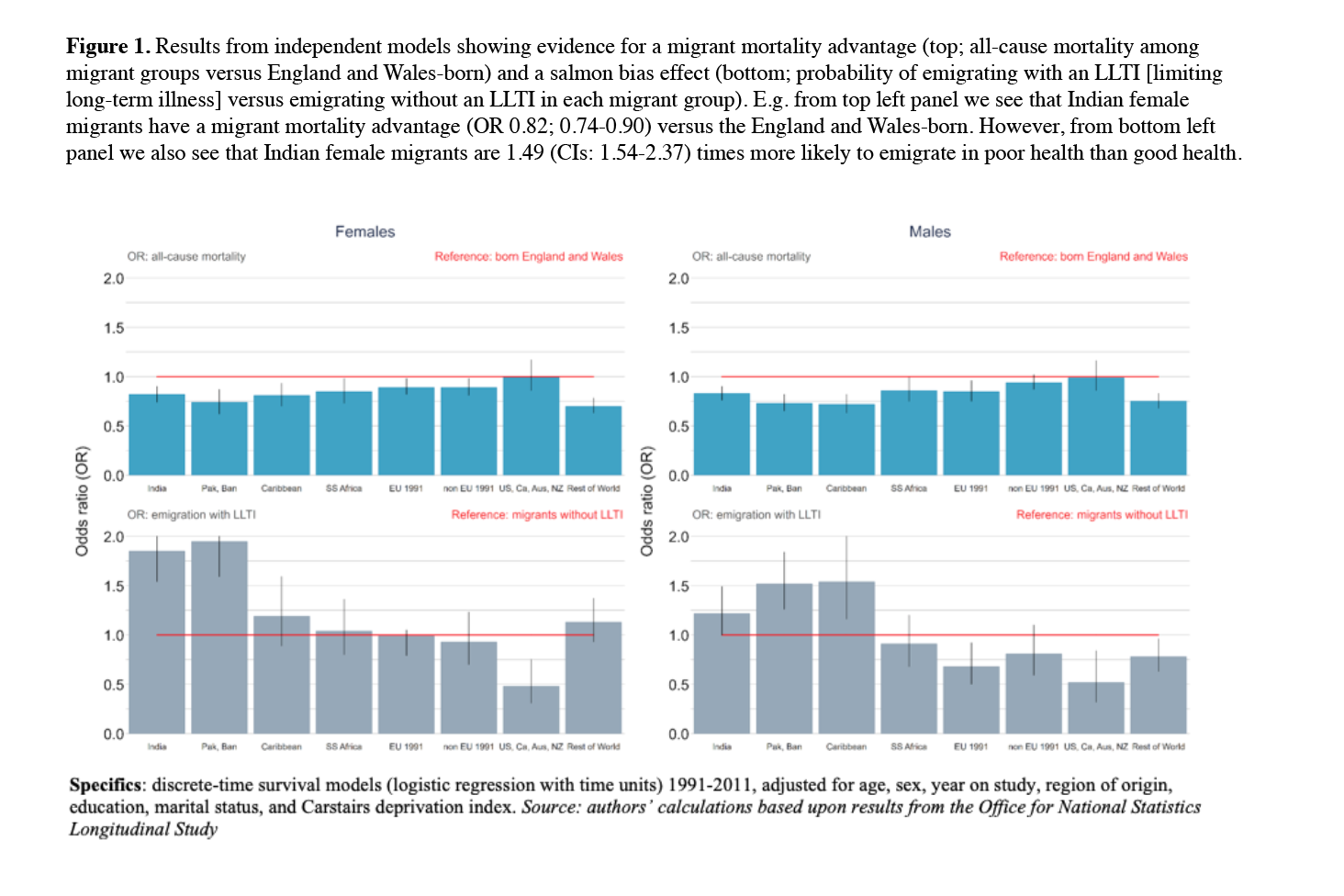 However, the mortality advantage of migrants from India, Pakistan and Bangladesh and Caribbean could be explained by selective emigration. The authors therefore indirectly corrected the mortality rates of these groups for the salmon bias effect at the aggregate level to see if it could explain away their advantage. They found that the death rates of emigrants would have to be unrealistically high to account for their lower death rates relative to the England and Wales-born. Therefore, as with censoring bias, they concluded that a salmon bias effect contributed to, but could not explain, the migrant mortality advantage.

Our findings demonstrate that migrants really do have lower death rates than the England and Wales-born. This allows us to focus on more substantive explanations of the advantage to try to understand why migrants often have lower risks of death than those of natives in host countries. Such findings fly in the face of public perceptions of migrants, who are often considered to adversely affect health and health care in host countries. However, while biases could not fully explain the migrant mortality advantage, they did explain a part of it. This is important, because it shows that the inability to capture movement in and out of host countries generates some degree of bias in our rates. This is relevant not only for migrant-specific rates, but for all rates in which migrants form a sizeable proportion of the population of interest. Such biases will only increase as the relative proportions of migrants continue to increase in host countries. This suggests a need to reform registration systems to better capture the increased mobility of international migrants. This is important to ensure greater confidence in our findings and in those provided to policy makers.