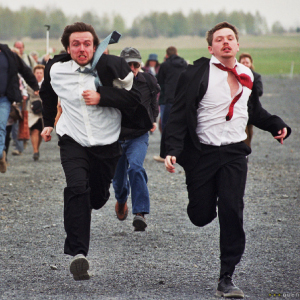 The aim of our work is to produce a database and to investigate in what way the phenomenon of migration has been represented in movies. We are interested in studying what messages (migratory themes, places, subjects involved) and what form of cinematographic language (genre) are mainly used and what aspects of migration are most represented in film production.

The European Migratory Films Database (EMFD) contains films, with the exception of certain genres (fantasy, cartoons, horror, science fiction, documentaries) produced between 1991 and 2010, in at least one European country, on migratory themes.

We drew information from several sources: the IMDB database; the filmography produced by the Fondazione ISMU, the filmography published by Berghahn and Sternberg (2010) and two important cinema guides (Mereghetti 2010; Morandini et al. 2010).

We selected the movies into our database by querying our main source (the IMDB – International Movie Database) with a few keywords, notably: immigrant, immigration, emigrant, emigration, migrant, migration, prejudice, racial prejudice, cultural clash, refugee, interracial, multicultural, racism. We had actually started with a shorter list, but it kept growing, since we included new terms as we found them in the IMDB review of each of the movies, which can be assimilated to a snowball sampling procedure.

For each film, from the plot and the information provided in the IMDB database, we identified both qualitative and/or quantitative variables:  the year and the countries of production, the original language, the length, the genre, and whether the film was taken from a book or based on a true story. We then added information about the gender and nationality of the filmmaker and any participation in a festival or cinema competition. From the plot the following main variables were then identified: country in which the film was set; direction of the migratory flow (countries of origin and destination); period of reference of the story (starting and ending decade); typology of the main character(s) of the movie (single, family, relatives, friends, couple, community, acquaintances); gender and age of the protagonist (child, adolescent, young, adult, elderly); cause of migration.

The EMFD consists of 256 films: it is in Excel format and is available for research (on request to the authors). 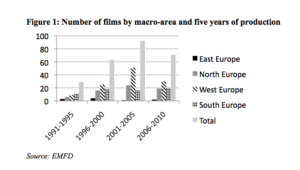 Since the first 5-years of our time window (1991-95), the total film production has been growing, with a slowdown in the final period (Figure 1). This trend has been determined largely by the production in Western and, less so, in Northern Europe, which are areas with a “mature” migratory history (Bonifazi et al. 2008). 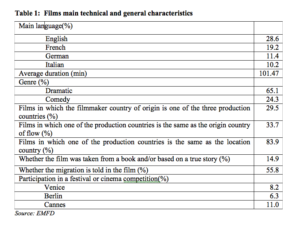 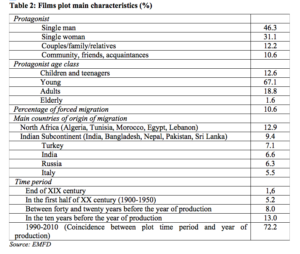 Table 2 shows the distribution of some noteworthy variables related to the plot. Single and young people are more often described; the lead role is generally performed by a man and the countries of origin are indeed the countries from where most immigrants in Europe come. Indeed, the films represent both migrations within and from outside Europe, and some may appear as countries of both as origin and destination (e.g. Italy). The stories take place mainly taken in periods that coincide, or at least partly overlap, with the twenty years considered in the EMFD.