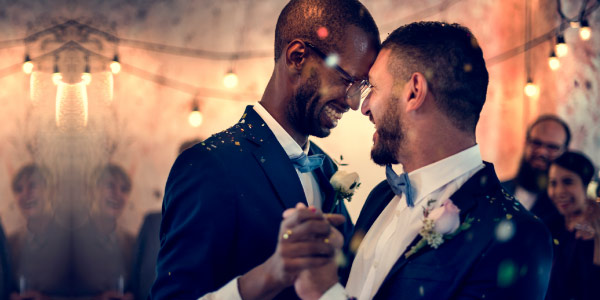 Sexual minorities have lower subjective well-being as compared to heterosexual individuals (Gonzales & Blewett, 2014). Sources of this well-being gap include social stigma, institutional discrimination, hate crimes and micro-aggressions experienced by sexual minorities. One of the most visible forms of institutional discrimination has been the denial of access to marriage to same-sex couples. Now that same-sex marriage has been legalized in a number of countries, the question arises as to whether well-being disparities have narrowed as a consequence.

How might legalizing same-sex marriage affect the subjective well-being of sexual minority groups? First, marriage is positively related to health, income, wealth, and family satisfaction (Carr and Springer 2010; Pirani and Vignoli 2016; Vespa and Painter 2011). Some of the underlying mechanisms producing these benefits apply to relationships in general, including emotional support, the pooling of economic resources, and the monitoring of health habits by partners. Other mechanisms are specific to formalized unions, such as less uncertainty regarding the future of the relationship, better social support, and access to institutional benefits.

The data for our analysis come from the Annual Population Survey (APS)¹ covering the period April 2011 to September 2016. These data allow us to provide yearly estimates of the subjective well-being of individuals living in same-sex and different-sex couples, either cohabiting or married.

Subjective well-being is measured using four questions. Respondents were asked to use a scale ranging from 0 to 10 to rate the following: (1) how anxious they were yesterday; (2) how happy they felt yesterday; (3) how worthwhile they find things that they do in their life; and (4) how satisfied they are with their life. We combined the answers to these questions into an overall scale of subjective well-being, ranging between 0 and 10.

Figure 1 displays how the subjective well-being of individuals in same-sex relationships declined during the period 2011-2013, an issue we discuss later. However, from 2014 onward, the year in which same-sex marriage was legalized, their subjective well-being increased (with a small decline in 2016). The subjective well-being of individuals in different-sex couples improved steadily across the whole observation period. The trends observed hold after accounting for observable differences in composition between groups and across time, including sex, education, age, earnings, region, children, and ethnicity. It is therefore likely that an event occurring in 2014 was responsible for the patterns observed. This event was most probably the legalization of same-sex marriage, as it affected individuals in same-sex couples but not those in different-sex couples. 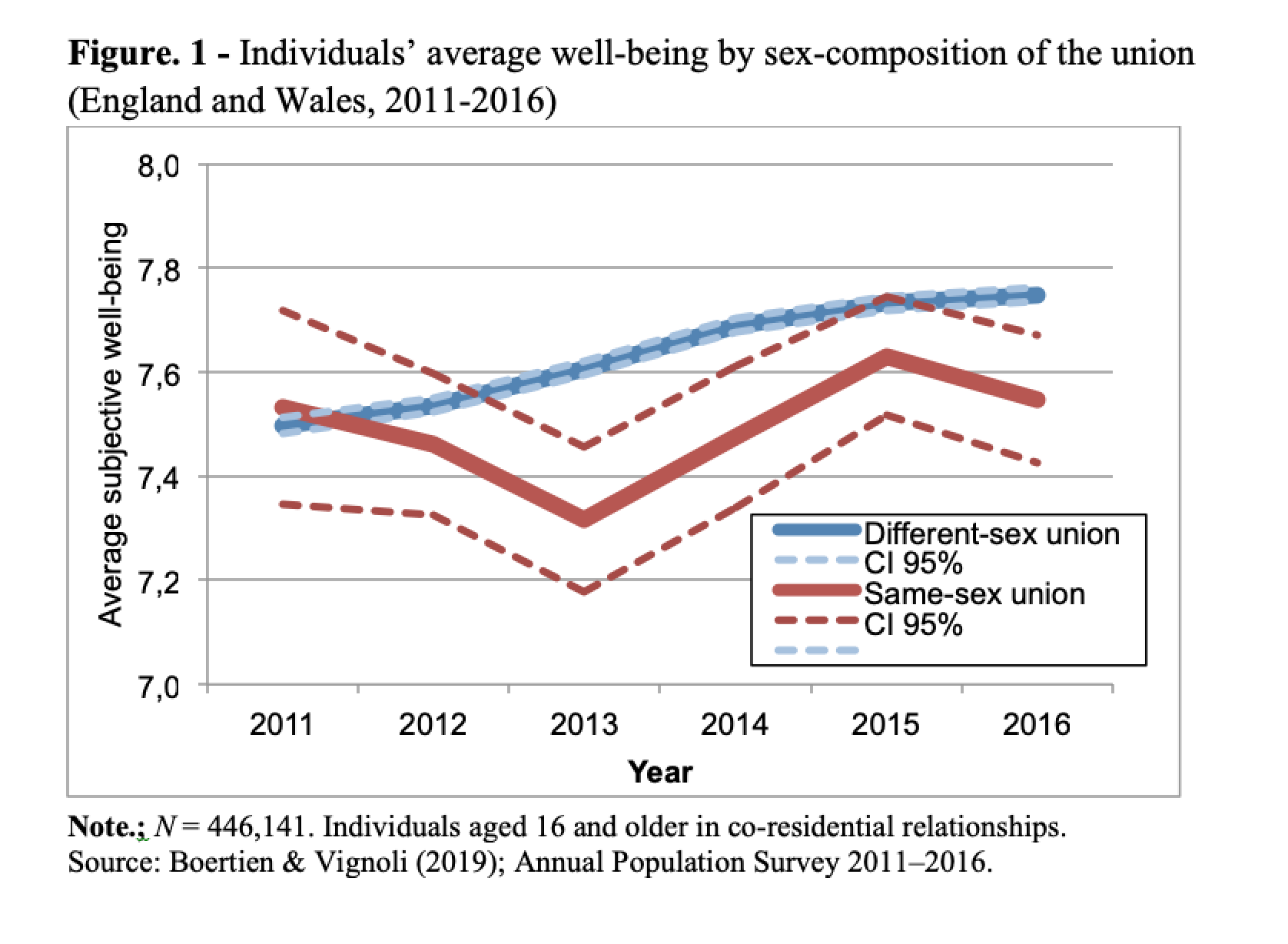 Why legalization matters: benefits of marriage and reduced stigma

How might the legalization of same-sex marriage have affected the well-being of individuals in same-sex couples? We advance two explanations: direct well-being benefits to getting married and decreases in social stigma.

In our analysis we find support for both arguments. After 2014, individuals in same-sex marriages displayed higher subjective well-being than individuals in both informal same-sex cohabiting unions and civil partnerships (a legal option available to same-sex couples since 2004). However, we could not determine whether these differences arose because getting married improved the well-being of these individuals or because individuals with the highest well-being are over-represented among those who marry. 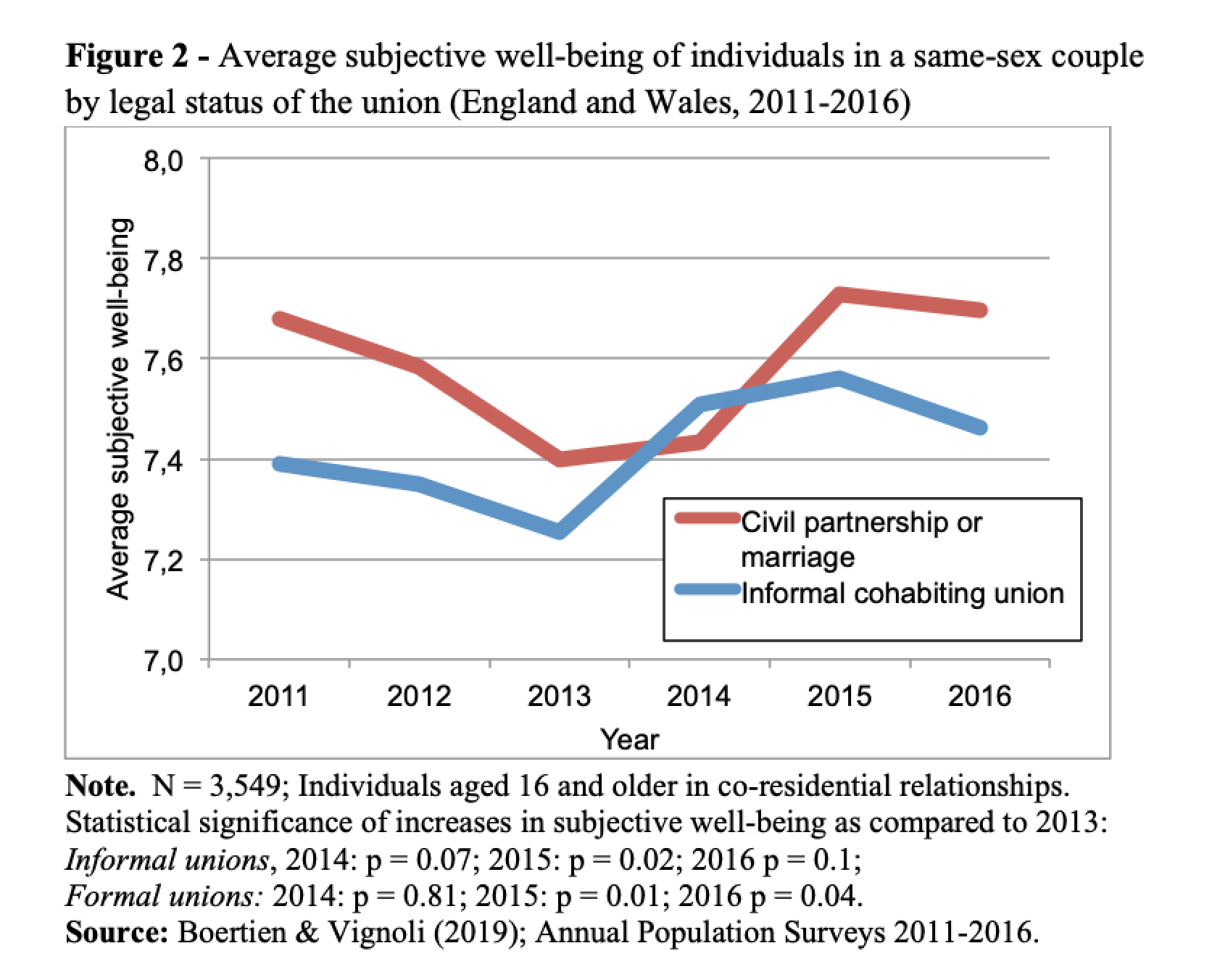 The importance of legalizing same-sex marriage for subjective well-being

Our results show that the time-trend in well-being of individuals in same-sex couples reversed from downward to upward following the legalization of same-sex marriage in England and Wales. That changes were observed regardless of union status provides empirical support for the argument that abolishing institutional discrimination improves the well-being of the individuals involved, both directly and indirectly, by reducing stigma. We conclude that legalizing same-sex marriage is an important step toward closing the well-being gap based on sexual orientation.