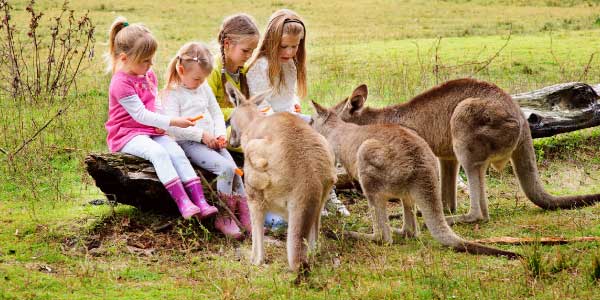 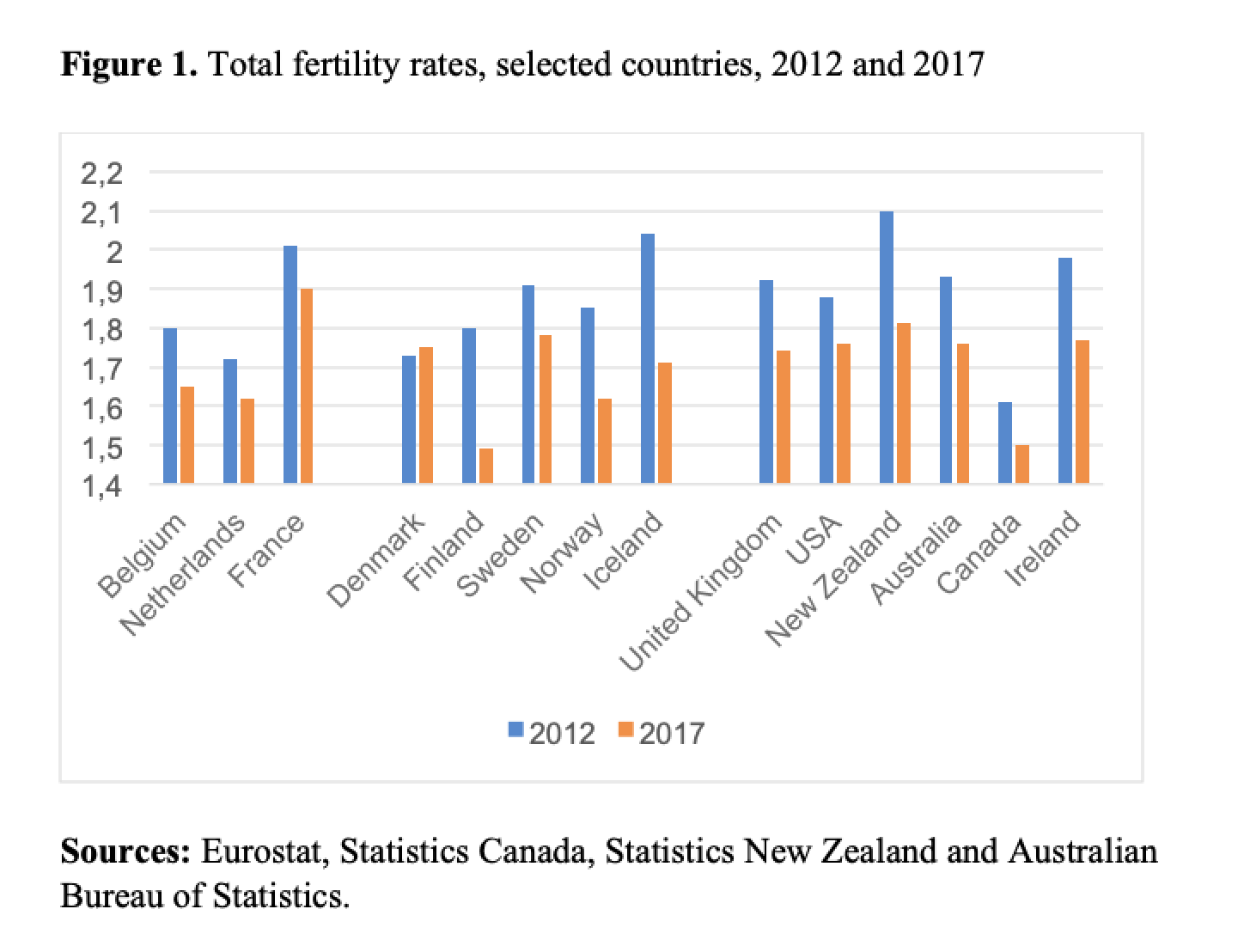 A recent N-IUSSP paper addressing the fall in fertility rates in the Nordic countries (Jalovaara, Neyer and Anderson 2019) observed that it was more apparent among lower educated persons than among the higher educated. The authors concluded that support for the combination of work and family may have underpinned the fertility of higher educated women but was less valuable to others. As this pattern was not evident elsewhere in Europe, they concluded that it was unique to the Nordic countries.

While birth rates by education are difficult to obtain in many countries, very substantial falls in rates of teenage birth in the English-speaking countries suggest that change is taking place among women with lower levels of education because it is these women who had high rates of teenage childbearing in the past. For example, in the United States, the rate of teenage fertility fell from 41 per 1000 in 2008 to 17 per 1000 in 2018 (US Department of Health and Human Services 2019). In Sydney, Australia, it has fallen sharply in the southwestern parts of the city where education levels are low while in the affluent, northern suburbs where education levels are high, teenage fertility cannot fall because it is already close to zero (ABS 2018).

Here, we show that, in Australia, across the two five-year periods, 2006-11 and 2011-16, fertility was near-constant for women with a post Year 12 tertiary qualification (referred to as High Education in the paper and constituting 68% of women aged 30-34, the peak age group of fertility) but fell significantly for those with lower levels of education (the remaining 32%, referred to as Low Education). This result mirrors the situation observed in the Nordic countries.

Australia conducts a population census every five years. For the three censuses, 2006, 2011 and 2016, a question on the number of children ever born to a woman was asked. Using the census product, TableBuilder, we were able to produce tables showing the mean number of children born to women and the parity distributions of women by single years of age at the three censuses for the two education categories. From these data, we obtained the changes over the two five-year intercensal periods in mean parity and in the proportions with zero, one, two and three children for single year of age birth cohorts. These changes can then be cumulated across all ages to estimate the total fertility rate and the parity progression ratios that applied in the two five-year periods, 2006-11 and 2011-16.

As women may shift from low to high education levels between ages 15 and 49, we conducted an extensive analysis to determine whether the results were affected by changes in education between the two censuses. We found the effects to be very slight, however, as at relatively high ages, where fertility is not negligible, the difference in fertility between the (small number) of women who increased their education in the intercensal period and those who already had the higher level of education at the previous census was very small. We were able to verify this via the longitudinal census files which match the records of the same individuals across censuses, and through sensitivity analysis.

Fertility decline is stronger for the low educated 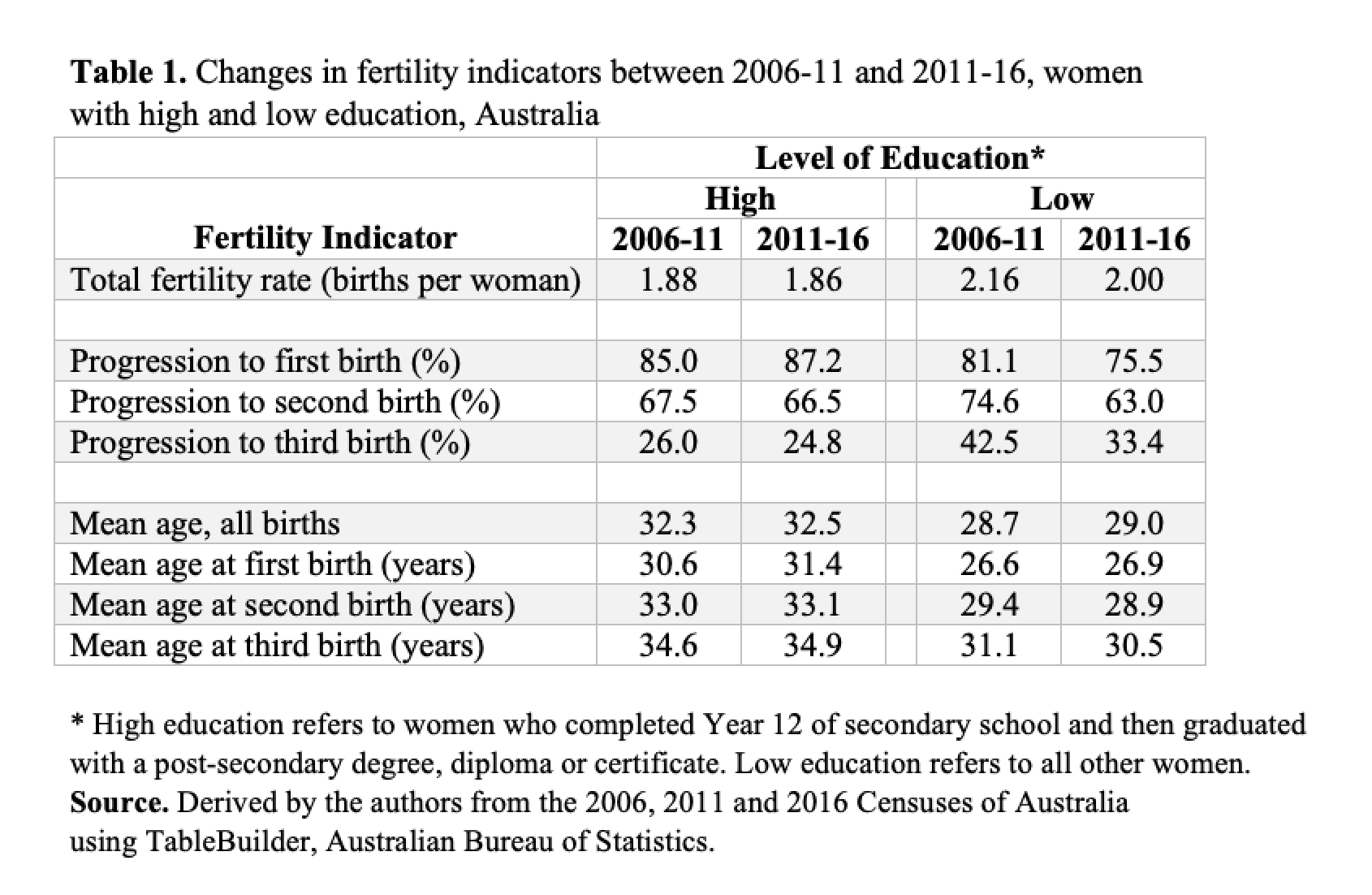 The balance of family support policy in Australia today is very much in favour of working women and, hence, more highly educated women. From one perspective, this is an enlightened policy that has enabled educated women to maintain a fertility rate of around 1.8 births per woman while having a high rate of employment. In addition, 75 per cent of women in highly qualified jobs receive paid maternity leave at their salary level from their employers. On top of this, they are entitled to $14,387 in government-funded paid maternity leave, so long as their individual income is below a very high threshold. The children of working women are also entitled to 50 hours per week of government-subsidised child care. As described above, educated employed women with children are also much more likely to be partnered than the low educated and, in most cases, their partners will also be highly educated and well-paid.

While policy has been good for highly educated women, government support for women (and their children) who are not employed (a higher proportion of the low educated) has moved strongly downwards since 2011. They are eligible for a Newborn Upfront Payment but this has fallen from $5,294 for each child in 2011 to $1,650 for the first child and $550 for subsequent children today, levels way below the amount paid to employed women through government-funded maternity leave. In addition, their children are eligible for only 20 hours of childcare per week compared to 50 hours for employed women. And lone mothers whose youngest child has turned six receive the extremely low, Newstart (unemployment) payment whereas previously they received a much higher level of benefit.

Hence, government support for families with children became much more regressive in the second period, 2011-16, than in the first. Thus, as in the Nordic countries, the closing gap between the fertility rates of highly educated and low educated women may well be related to the relatively low level of government support for poorer people.