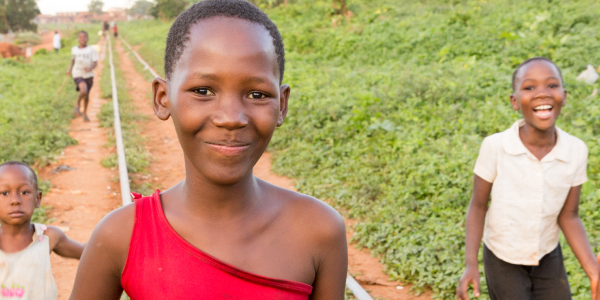 How fertility changes over time in urban versus rural areas matters for demographic dynamics in an increasingly urbanized world. Trends in urban fertility determine endogenous population growth in cities, whereas trends in rural areas inform about demographic pressure for rural-to-urban migration. The urban-to-rural diffusion of the small family ideal also has implications for the pace of completion of the global fertility transition.

International comparisons of the fertility gradient by residence (in a given period) found a higher excess of rural over urban fertility in countries situated in the middle of their demographic transition (i.e. the shift from high to low birth and death rates), when compared to those in early or advanced transitional stages (Shapiro and Tambashe 2000, United Nations 1987), suggesting that the evolution of rural excess fertility follows an inverted U-shaped curve. However, this pattern has not been confirmed by analyses of trends within countries over time (Montgomery et al. 2003). We aim to re-assess this question (see also Lerch 2018).

The present analysis covers a larger geographical and temporal spectrum of fertility change than previous research. We use 295 World Fertility Surveys (WFS), Demographic and Health Surveys (DHS), Multiple Indicator Cluster Surveys (MICS), and International Public Use Samples of Population Censuses (IPUMS) to estimate cohort fertility of women born between 1896 and 1982, covering 60 countries across the global South. This study also adds to the existing knowledge by controlling for three potential biases in the international comparison of fertility trends. First, we measure trends in the rural-urban fertility gradient over the course of the national fertility transition, rather than over calendar years, in order to account for international differences in demographic context. Second, the heterogeneity in the urbanization context (such as the definitions of urban areas) is controlled for by estimating an average within-country trend across the global South (see Lerch 2018 for details about methods). Third, we focus on the average number of children ever born to successive birth cohorts (rather than on fertility in calendar years) in order to avoid the disturbing effect of large-scale rural-to-urban migration on the measurement of urban fertility trends. Last, we dissect the trend in rural excess fertility through an analysis of the underlying dynamics in the rural and urban transitions.

Does the excess of rural over urban fertility follow an inverted U-shaped curve?

The results support the hypothesis of an inverted U-shaped trend in rural excess fertility over the course of the national fertility transition (Figure 1). The average rural-urban fertility ratio rises from 1.06 to 1.16 before the national transition onset, increases sharply to 40 percent in the first 20 transition cohorts, stabilizes at this level in the subsequent 10 cohorts, and finally drops monotonically down to 1.23 in the 55th transition cohort. 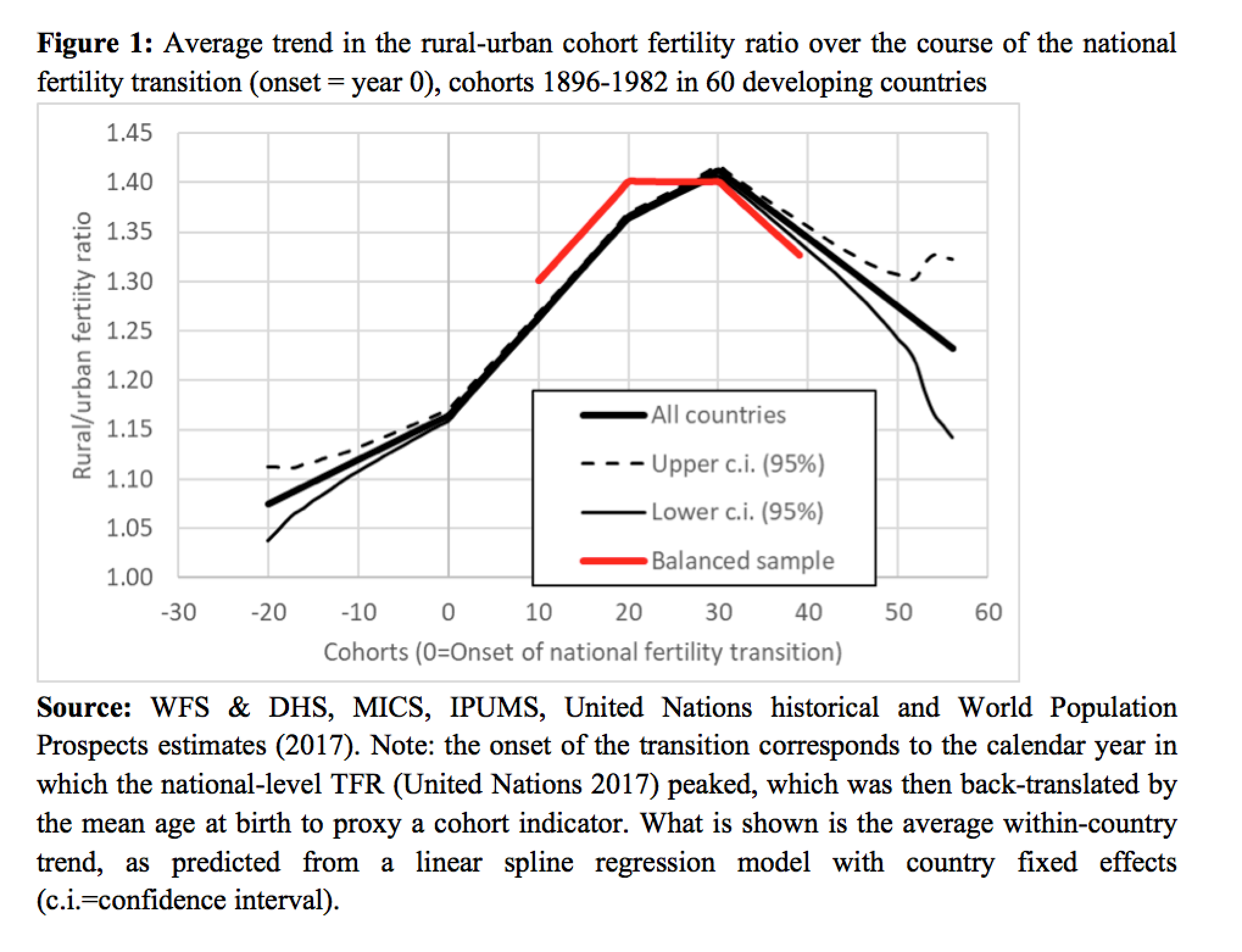 What explains this curvilinear trend in the excess of rural over urban fertility?

Changes in the rural-urban fertility ratio are determined by three underlying dynamics:

(a) the pace of the earlier fertility decline in urban areas,

(b) the time lag in fertility transition onset in rural areas, and

(c) the rural-urban difference in the trajectories of fertility change following the sector-specific transition onsets.

How do these dynamics interact to produce the above non-linear trend in rural excess fertility?

Interestingly, the average urban and rural trajectories of fertility decline after their respective onsets followed a similar U-shaped curve: starting from an initial annual drop of about -0.075 children per woman and cohort, the pace accelerated to about -0.093 in the mid-transitional stages, and then decelerated (to -0.030 in urban areas). Therefore, once rural fertility finally started to drop, the pace of decline was much faster in rural than in urban areas (given the substantial time difference between the sector-specific transition onsets). This explains the bulk of the decrease in the rural-urban fertility ratio from its peak level.

At more advanced transitional stages, the decline in the rural-urban fertility ratio was exacerbated by a more pronounced slowing of the urban fertility transition with respect to the rural transition. This can be attributed to the positive indirect demographic effect on urban fertility of rural-to-urban migrants. They had a higher level of childbearing compared to non-migrant women socialized in cities.

Our analysis of within-country trends in the rural-urban fertility gradient confirms an inverted U-shaped evolution over the course of the national fertility transition—as suggested by previous inter-country comparisons of fertility levels in a given period. The earlier onset of the fertility transition in urban than in rural areas confirms the importance for fertility change of structural and ideational changes in society, which are intimately related to, and intensified by, population concentration (e.g. urbanization). The major role played by the rural lag in the transition onset for the evolution of rural excess fertility also highlights how the pace of national fertility transitions is dependent on the spread of societal transformations from cities to the periphery of a given country.

These lessons have implications for our understanding of future population trends and policies. First, we can recommend a strengthening of urban-rural interactions and family planning programs in rural areas in order to advance fertility transitions in high fertility regions (such as sub-Saharan Africa). Second, given the continuous fertility decline among long-term urban dwellers, the dominance of natural increase in the process of urban growth in developing countries may end soon. The role played by the direct and indirect demographic effects of migrants can be expected to increase in the future. Last but not least, this study underlines the need for improved collection of demographic data in urban and rural areas.