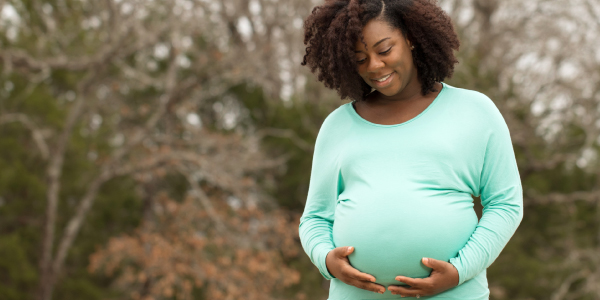 Using demographic survey data from a large set of developing countries, supplemented by estimates of induced abortion rates from other sources, we estimated the incidence of unintended pregnancy at different stages of fertility transition. Decline in the desired number of children is assumed to be a key driver of increased contraceptive use.

What are we talking about?

Unplanned pregnancies occur when contraception is not practiced (because of obstacles to use or because sexual activity was not anticipated) or when it fails. The result can be either an induced abortion or a birth. Among the latter, we can distinguish births that are either mistimed (i.e. occurring sooner than desired) or unwanted (i.e. in excess of the desired number of children). Unplanned pregnancies can thus be classified into three categories: induced abortion, mistimed birth, unwanted birth.

We address two questions: first, what is the relative incidence of these three outcomes of an unplanned pregnancy? And, second, how does the incidence of each vary according to the “stage of the fertility transition”, as measured by the level of desired fertility?

To quantify the population-level incidence of these three types of unplanned outcomes, we calculate various “total” rates, complemented by rates of planned outcomes. These rates measure the average number of outcomes of various types that women would have over a lifetime if they experienced the current age-specific rates of their population. For example, the total fertility rate (TFR) measures the lifetime number of births at current age-specific rates. Other total event rates that we estimate are the total pregnancy rate (TPR) and the total abortion rate (TAR) with TPR=TAR+TFR. The TFR equals the sum of wanted and unwanted births TFR=TFRw+TFRunw, and the wanted TFR equals the sum of mistimed and planned births TFRw=TFRmis+TFRpl.

We use data from DHS surveys conducted after 2000 in 53 countries that had a population size above 2 million in 2015 and were never part of the Soviet Union: 31 in sub-Saharan Africa, 15 in Asia and North Africa, and 7 in Latin America. Estimates of unwanted and mistimed births follow DHS definitions (Rutstein and Rojas 2006). Estimates of abortion rates are based on regional estimates provided by the Guttmacher Institute (Sedgh et al. 2016). For details see (Bongaarts and Casterline 2018)

Figure 1 plots the incidence of unplanned events by desired family size (DFS). The tallest set of bars represents the total unplanned pregnancy rate. This total consists of three components: 1. abortions (TAR); 2. unwanted births (TFRunw); and 3. mistimed births (TFRmis). The bars for TFRunpl and TFRmis show a marked inverted-U-shaped pattern, with the lowest values in countries with high or low desired family size. In countries with a DFS near 2, women average 2.3 unplanned pregnancies over their lifetimes, which equals the sum of 1.1 abortions, 0.6 unwanted births and 0.5 mistimed births. Mistimed births exceed unwanted fertility in most countries except in the latest transition stage. 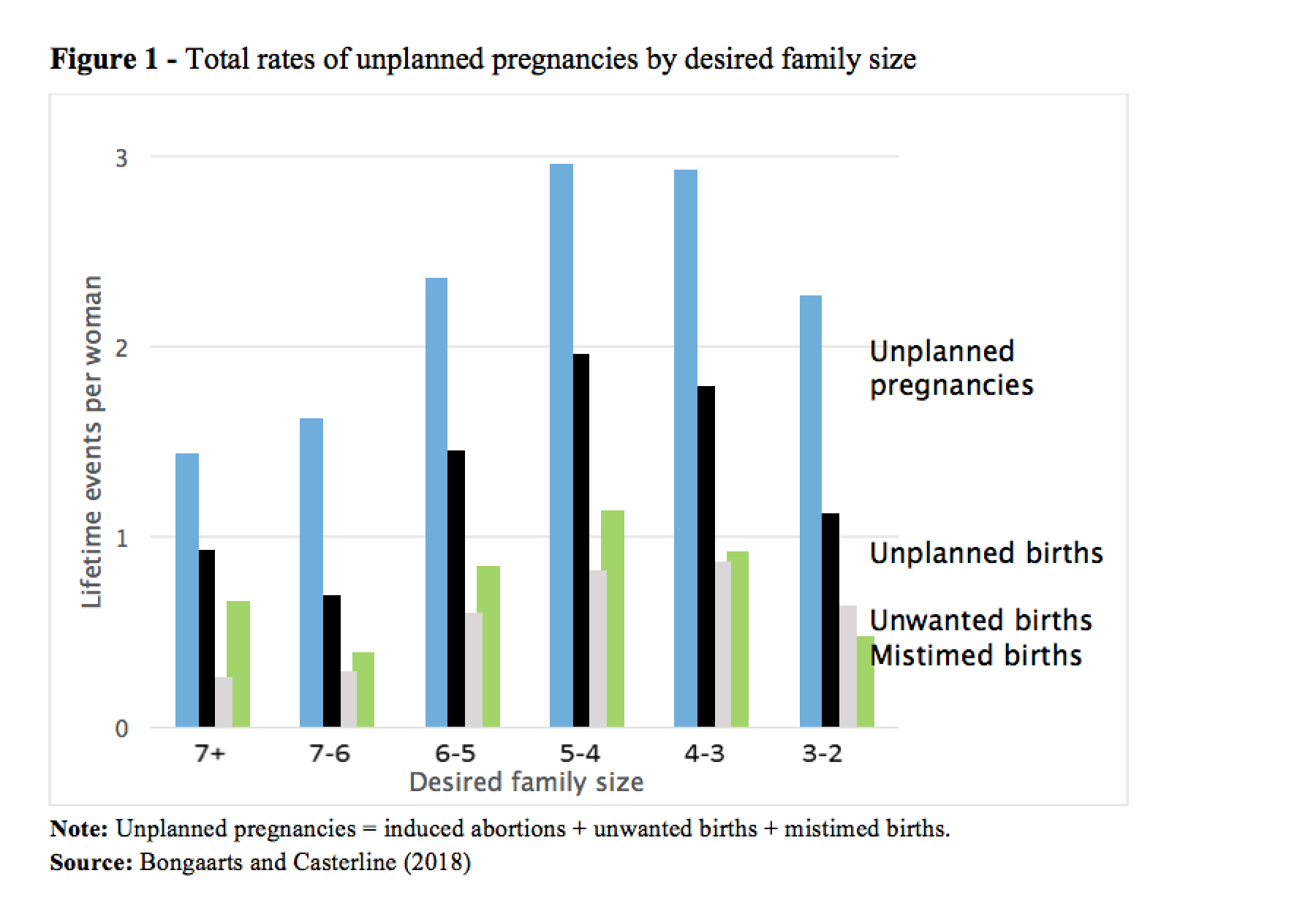 The total abortion rate (the difference between the blue and black bars in Figure 1) in the earliest fertility transition countries (with low desired family size) is about half the rate in the late transition countries. There are several reasons for this: 1) limited demand for abortion due to high desired family size; 2) low availability of abortion methods and services; and 3) low contraception failure rates due to low contraceptive prevalence. Later in the transition, these factors all rise, thus causing abortion rates to be higher.

Our main finding is that unplanned pregnancy rates are substantial in all countries but are typically highest in mid-transition countries. Furthermore, the unplanned proportion of all pregnancies is highest in countries with the lowest desired family size.

This pattern has a simple explanation. In societies at the beginning of the fertility transition, most of women’s reproductive years are devoted to bearing wanted children, so unplanned pregnancies are relatively uncommon. However, as desired family size declines, the number of years devoted to having wanted children decreases, and the number of years at risk of unplanned childbearing rises correspondingly. Ceteris paribus this produces an increase in unplanned pregnancy rates over the course of transition.

Even so, higher rates of unintended fertility do not automatically follow from higher risk of unintended fertility. Consistent and effective practice of birth control (induced abortion, contraception) can offset the higher risk. However, the empirical evidence presented here demonstrates that this risk is far from completely offset in contemporary developing countries. In those with the lowest desired family size (less than three children desired), the unplanned pregnancy rate exceeds two per woman, and the unplanned birth rate exceeds one per woman, i.e. a substantial departure from entirely successful achievement of fertility desires. Moreover, the data reveal that the proportion of unplanned pregnancies is highest in societies with the lowest desired family size – more than half of pregnancies are unplanned, and almost one-third of pregnancies yield an unwanted or mistimed birth.

Even as fertility declines, the need to address obstacles to consistent and effective birth control remains high: if anything, this need increases. Certainly, the justification for investment in low-cost access to birth control extends into the later stages of fertility transition and, for that matter, persists in post-transition societies.

Bongaarts John and John Casterline. 2018.“From Fertility Preferences to Reproductive Outcomes in the Developing World. Population and Development Review 44(4).