In recent decades, same-sex couples in nearly all high-income countries have gained increasing access to the same legal family forms as those available to different-sex couples. The Nordic countries and the Netherlands were pioneers in these developments. In Sweden, registered partnerships for same-sex couples were introduced more than two decades ago, in 1995. In almost all aspects, the registered partnership amounted to a de facto same-sex marriage, and in our contribution we refer to it as such. In 2009, new gender-neutral legislation also assigned the label of “married” to all new spouses, regardless of their sex. Like other dimensions of civil status, entries into and exits from registered partnerships / marriages are recorded in national administrative data, and available for demographic research. In a recent study (Kolk and Andersson 2020), we used such register data to document trends in marriage formation, divorce, and childbearing events among men and women who entered a legal same-sex union in Sweden. Our research follows earlier demographic studies of same-sex couples based on Swedish and Nordic register data (Andersson et al. 2006; Kridahl and Kolk 2018; Wiik, Seierstad and Noack 2014, 2016), but in this case we expand on earlier research by focusing on changes in behavior over calendar-year time from 1995 to 2012, and on new trends related to childbearing and parenting in same-sex unions.

A number of legal changes have taken place in the past 20 years in Sweden, including the right for same-sex spouses to adopt children (2003), to undergo government-funded insemination (2005), and to enter formal same-sex marriage under the gender-neutral marriage legislation that replaced the registered partnership in 2009. However, not all of these legislative changes have had the same demographic impact. For instance, while the formal same-sex marriage introduced in 2009 was an important symbolic recognition of the equality between same-sex and different-sex marriages (for the case of England and Wales, see, for instance, Boertien and Vignoli 2020), it brought no crucial changes in the underlying legal rights associated with marriage as compared to those of the registered partnership. Incidentally, this is why we do not distinguish between these two types of (formal) union in the rest of this article and simply talk about marriage and divorce, across all the years we study.

While male-male marriages have increased only modestly in the past 20 years in Sweden, female-female marriages have skyrocketed (Figure 1). To some extent, this reflects the growing popularity of formal unions for same-sex couples, and is probably related to the new policies that facilitate childbearing and parenting in female same-sex unions in particular. Interestingly, when the labeling of the civil status changed from registered partnership to marriage in 2009, the pace of union formation was not affected (Figure 1). 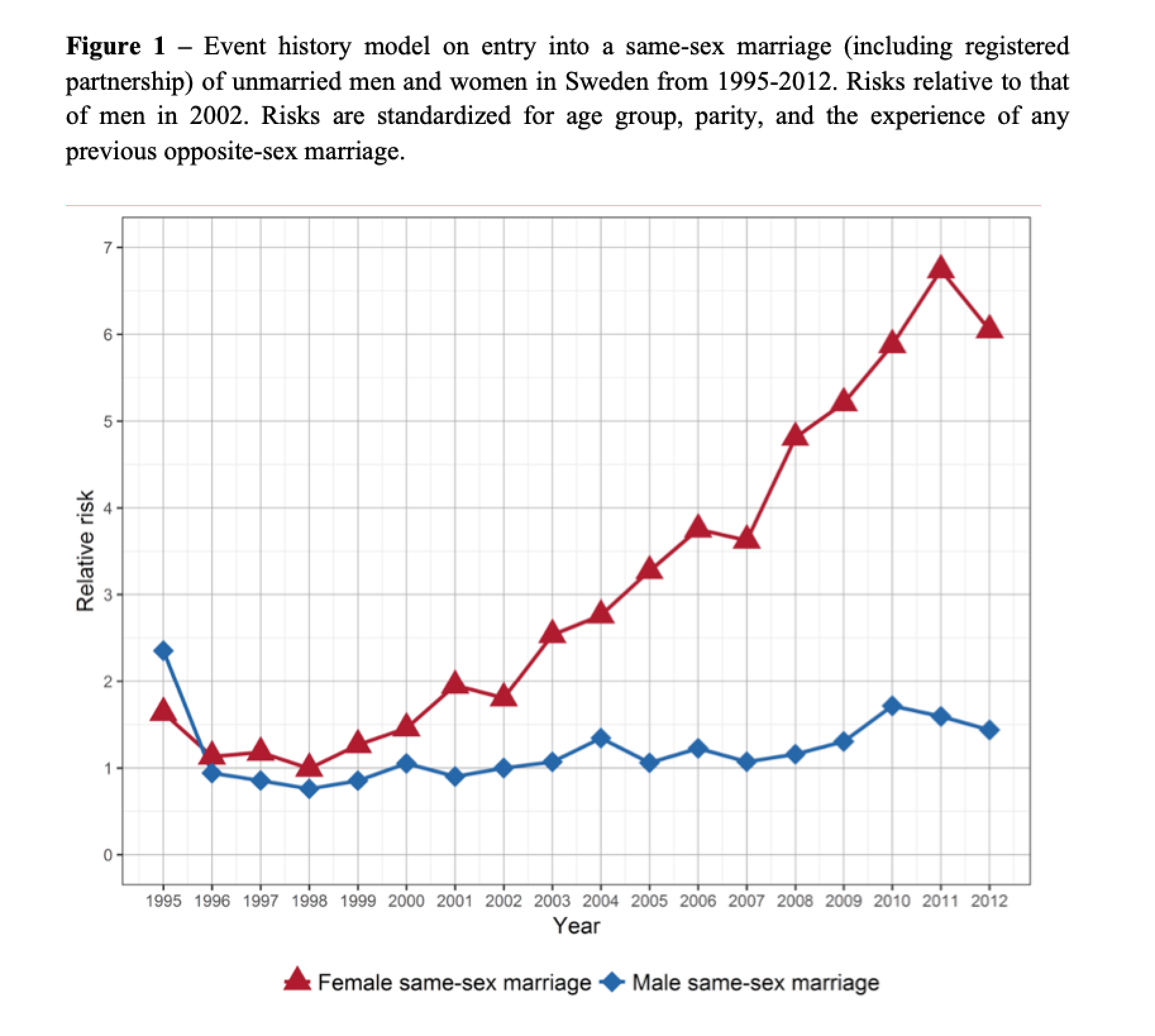 Childbearing in female same-sex marriages has increased rapidly over time in Sweden. When taking both female spouses’ childbearing outcomes into account, we find that childbearing events within marriages between two women are nowadays even more common than within different sex-marriages. In Figure 2 we show childbearing events from the individual perspective only: when there are two women in the couple, the chances of having a child are of course greater than p (individual probability): they are about 2p–p2. 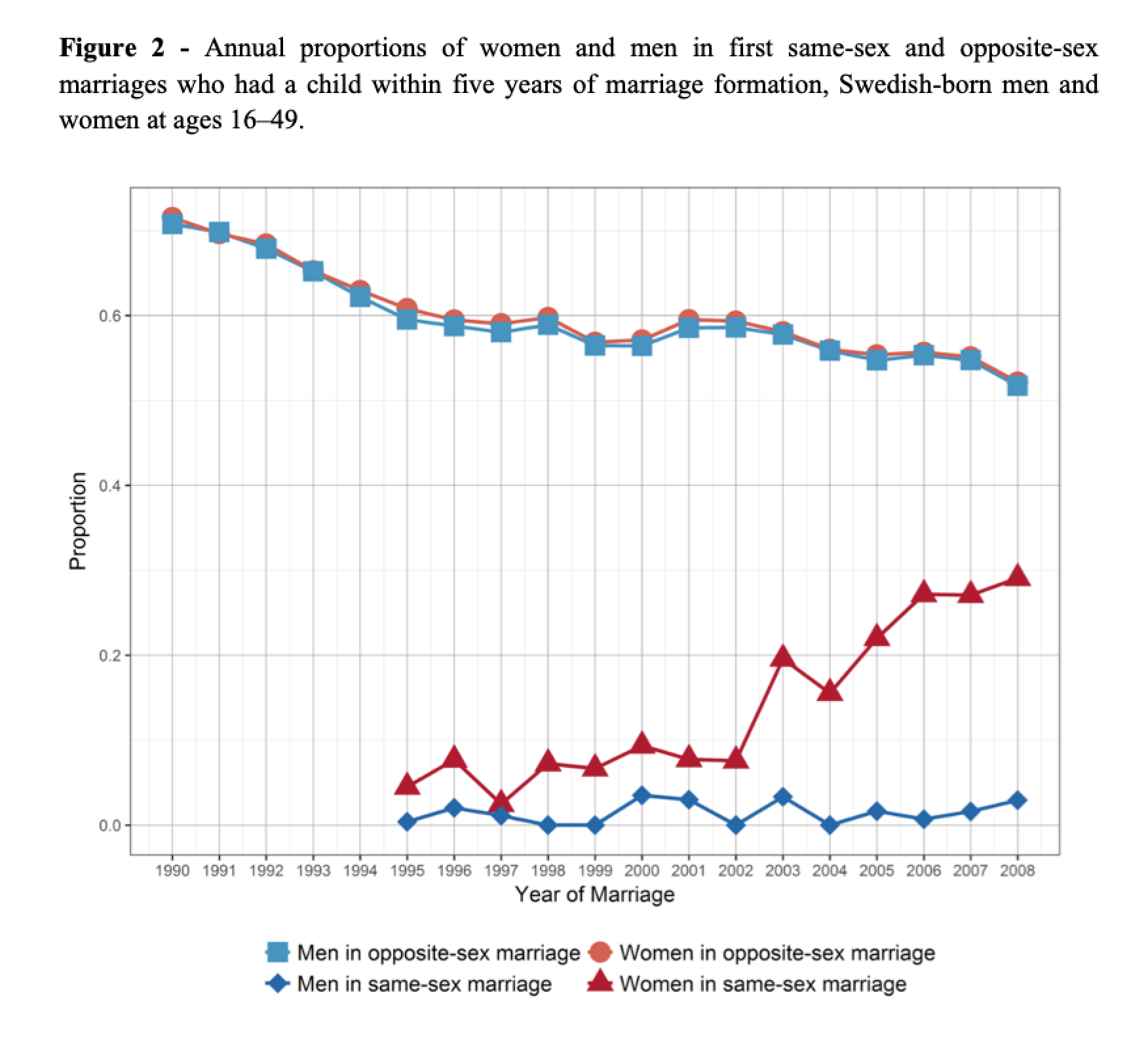 Same-sex marriages in general, and those of two women in particular, have traditionally been more fragile, and exposed to the risk of dissolution (Andersson et al. 2006). This tendency has lessened over time, however. The divorce risk of male same-sex couples is now similar to that of different-sex couples, but is higher (about twice as high) among female same-sex couples (Figure 3). For childless marriages, we find that male same-sex marriages have the lowest divorce risk of all marriage types. After 15 years of marriage, approximately 40% of female same-sex unions, and 30% of other types of marriage have ended in divorce. 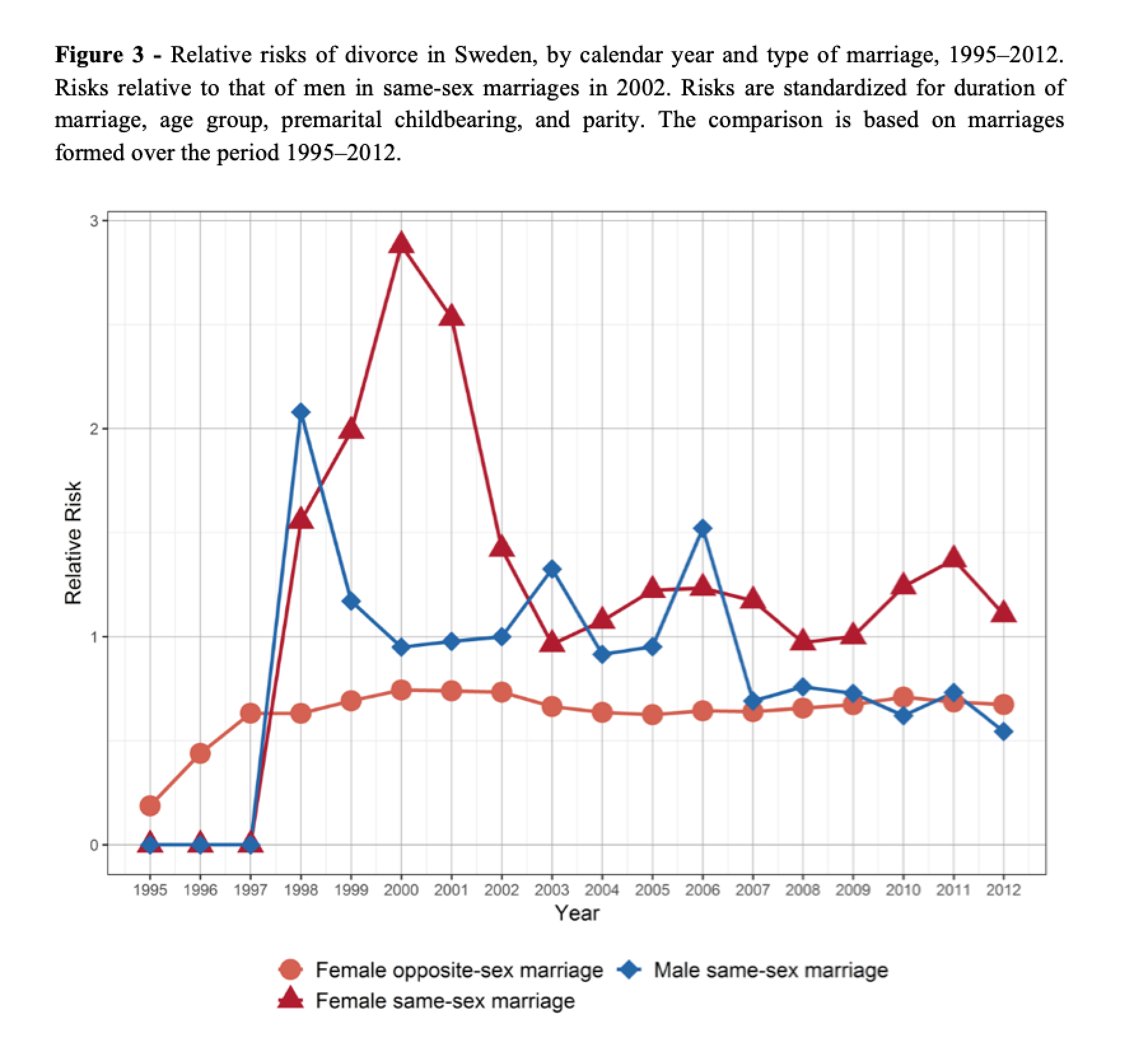 While still a small minority of all marriages formed in Sweden, same-sex marriages have become increasingly common over the past 20 years. Initially more men than women entered same-sex marriages but this quickly reversed over time. In 2012, the probability of entering a different-sex marriage was still about 50 times higher than that of forming a same-sex marriage for a woman, but about 200 times higher for a man. At the same time, the behavior and characteristics of same-sex spouses have become increasingly similar to those of spouses in different-sex marriages. For example, the effect of education on marriage (positive) and divorce (negative) is similar for different- and same-sex couples. The increasing prevalence of same-sex marriages and the increasing similarity in patterns of marriage, childbearing (at least among females), and divorce in different types of unions have occurred in response to, and in tandem with, increasing social and legal rights granted to spouses of the same sex. More inclusive policy-making thus seems to have been both a driver and a consequence of ongoing family-demographic change.

Kolk, M. and G. Andersson. 2020. “Two Decades of Same-sex Marriage in Sweden. A Demographic Account of Developments in Marriage, Childbearing and Divorce.” Demography.