In the context of population ageing, work-family reconciliation policies potentially play an important role in supporting both fertility and parental employment. However, the evaluation of such policies remains a challenge. Using population data for Belgium, Jonas Wood and Karel Neels find that the local availability of formal childcare positively affects fertility among dual earner couples.

The unprecedented increase in female employment and the rise of the dual earner model, in tandem with declining fertility levels, have undoubtedly been the most important household transformations in post-war Europe. In this context, individual welfare issues arise, such as balancing work and family life or unmet fertility desires, while macro-level implications include population ageing and related welfare state challenges (e.g. pension protection and health care costs).

In response to increasing female employment and declining fertility levels, many European governments have introduced and extended family policies geared towards the reconciliation of (female) employment and family formation, such as formal childcare and parental leave. In a recent study by Wood and Neels (2019) the effectiveness of formal childcare as a means to support childbearing among dual earner couples is assessed in the Belgian context.

Women’s increased economic activity since the second half of the last century has created a tension between work and family. Sociologists stress the incompatibility between the social roles of mother and worker, with conflicting societal expectations connected to these roles. This socio-cultural work-family tension for mothers stems from an increase in women’s participation in employment in post-industrial societies, which has not been accompanied by an equivalent shift away from social norms prescribing mothers as primary carers. Economists suggest opportunity costs as a complementary source of tension between work and family, as every hour spent on non-market activities (such as childbearing) yields an ever higher opportunity cost, for instance in terms of forgone wages or career opportunities.

The childcare-fertility hypothesis assumes that local availability of childcare positively affects dual earners’ fertility. From an economic perspective, the possibility of outsourcing childrearing tasks lowers the opportunity costs of childbearing. From a socio-cultural perspective, it fosters a context in which the role of the state as care provider is accepted and the combination of work and family is approved (Gauthier, 2007).

Formal childcare in Belgium during the early 2000s

Over the last decades, Belgium has consistently been one of the top-ranked countries worldwidein terms of formal childcare provision (OECD, 2016), and was one of the first countries to be included in a short list of nations that meet the Barcelona target of 33 per cent childcare enrolment for children aged 0-3 (Population Council, 2006).

From a European perspective, formal childcare coverage/enrolment rates in Belgium are typically close to levels found for France and Scandinavian countries like Sweden. Although Belgium has certainly been a forerunner in the expansion of formal childcare, its availability is less universal than in the Swedish context. Whereas previous research for Sweden around the turn of the century has shown that levels of childcare provision are generally sufficient, with minor regional variation and effects (Andersson, Duvander, & Hank, 2004), the Belgian context is characterised by periodic shortages, waiting lists of varying length, and research has reported cases where parents fail to gain access to formal childcare (Farfan-Portet, Lorant, & Petrella, 2011). 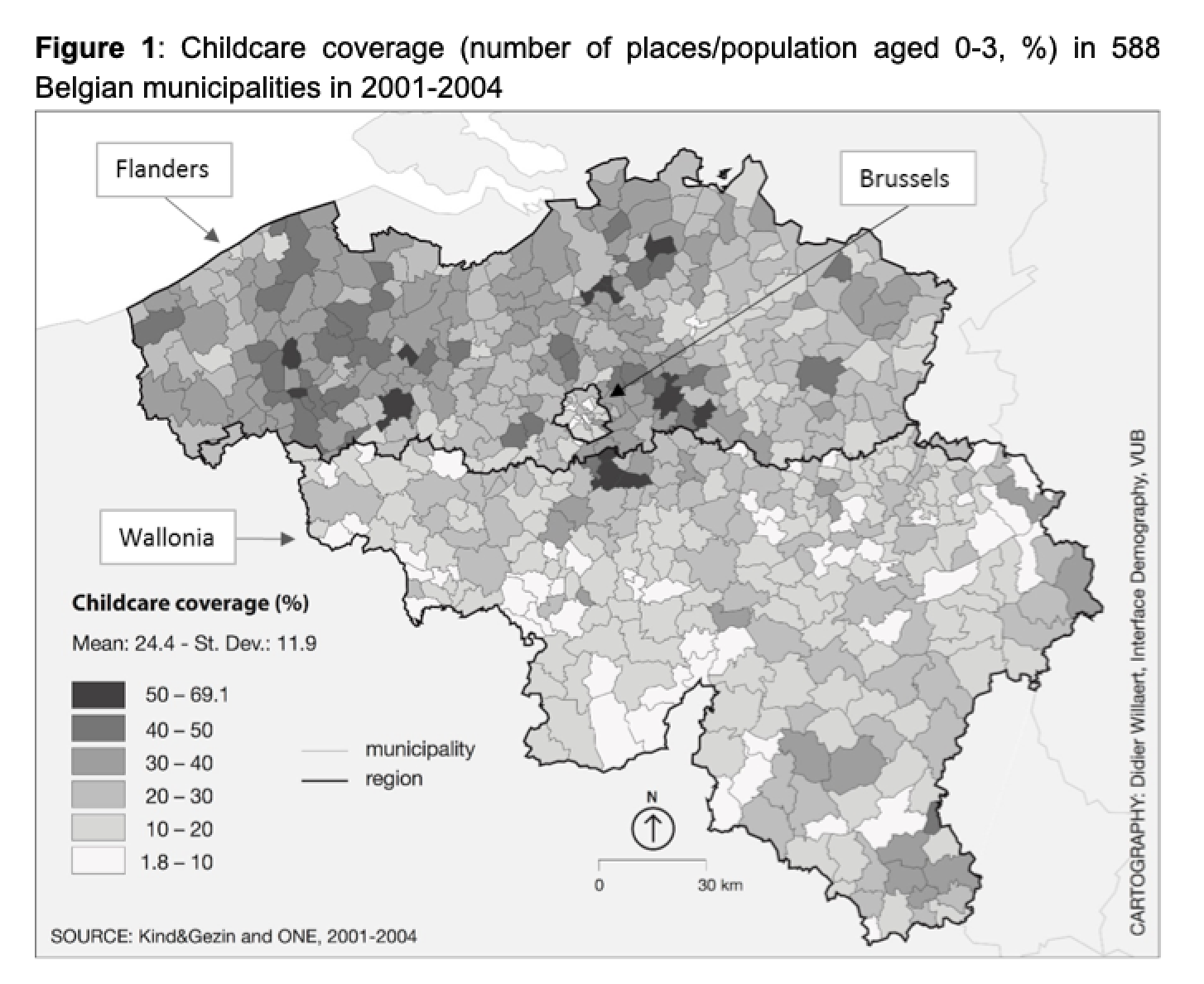 The importance of work-family reconciliation policies for dual earner fertility

Figure 2 compares birth schedules by level of childcare coverage and suggests that birth hazards are not indifferent to the local availability of formal childcare, but that contexts with a high availability also exhibit higher first, second, and third birth hazards among dual earner couples. 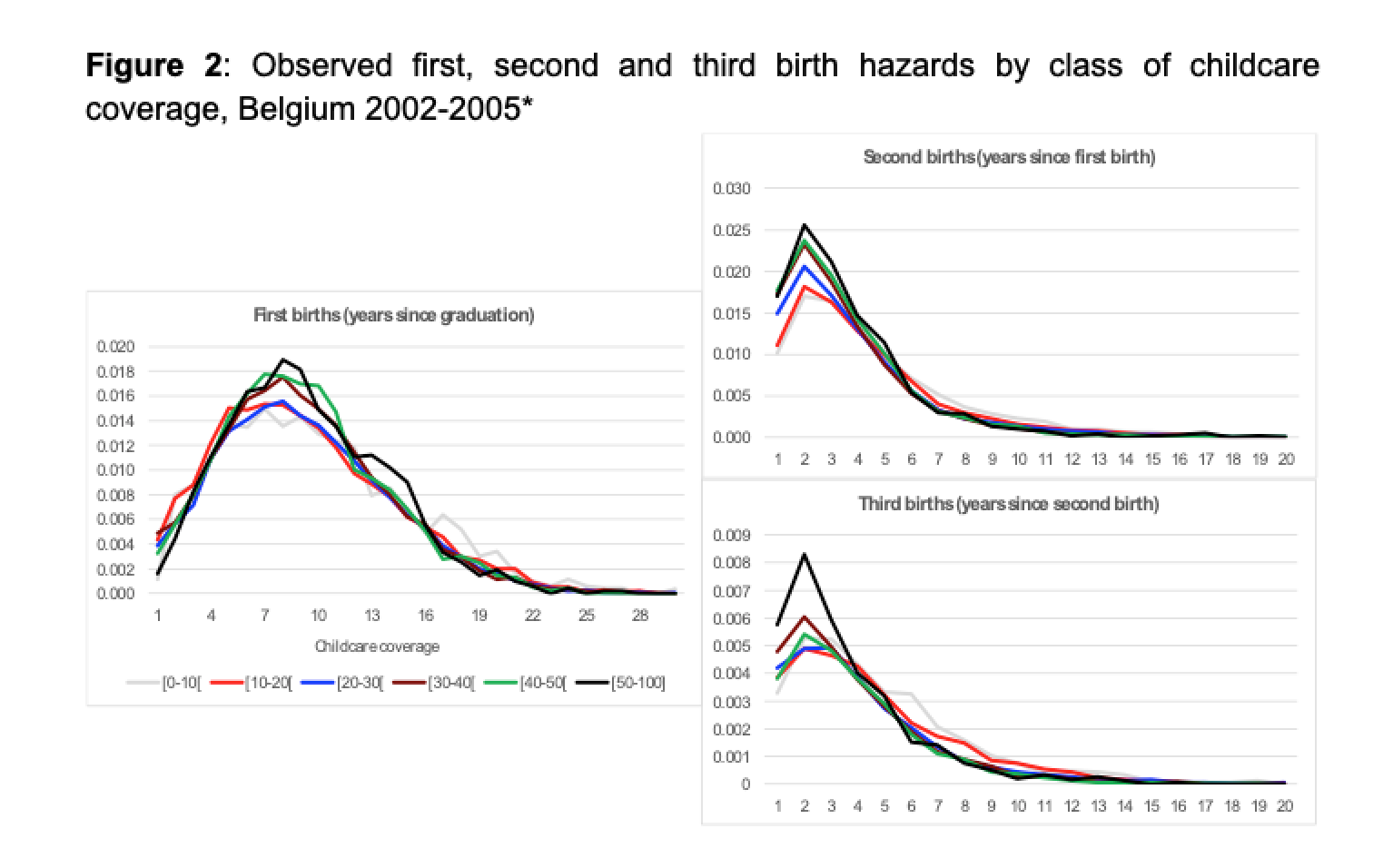 In order to assess whether this descriptive positive association between childcare provision and fertility among dual earner couples prevails after controlling for (I) other characteristics at the individual, household, or municipal levels; (II) reverse causation in which dual earner fertility yields higher childcare coverage instead of policy effects; and (III) selective migration in which formal childcare attracts couples with childbearing intentions rather than stimulating fertility among initial residents, multivariate fixed- and random-effects models with robustness checks for feedback effects and selective migration are performed. The results indicate a substantial impact of local childcare availability on the Synthetic Parity Progression Ratio² to parenthood (SPPR1).

Whereas the observed SPPR1 in Belgium in the early 2000s is 89.5 percent, 92.1 percent of women would make the transition to parenthood in case of a 1-percent increase in childcare coverage. Although the impact on second and third births seems more limited, the number of higher order births is also affected indirectly due to a larger set of one-child parents at risk of making those transitions. Combined results for first, second and third births indicate that a one percent increase in formal childcare availability yields a three percent increase in period total fertility. Hence, even limited changes in the availability of formal childcare can have a substantial impact on fertility levels among dual earners, which seem considerable given the low and even lowest-low fertility levels in the developed world.

² The SPPR1 indicates the percentage of women that would eventually progress to parenthood if they exhibited the fertility behaviour observed in the 2002-2005 observation window of this study, for groups at different times elapsed since leaving education, throughout their own life course. Hence the SPPR is a so-called “synthetic” indicator, as opposed to real cohort indicators which can only be calculated for cohorts that have completed their reproductive lifespan. Similarly, the SPPR2 and SPPR3, respectively, indicate the share of women in the synthetic cohort that would progress from one to two children, and from two to three children.