Impact of obesity on life expectancy levels and trends in Europe

Obesity, defined as a body mass index (BMI) of 30 kg/m2 and over, is considered one of the biggest public health challenges of the 21st century (WHO 2018). Compared to their non-obese counterparts, obese individuals are at higher risk of developing and dying from a range of diseases, including type II diabetes, several types of cancer (breast, pancreatic, colon, rectum) and cardiovascular disease. Obesity has been increasing worldwide since the 1980s and is considered a global epidemic.

After the USA, Europe has been hit hard by the obesity epidemic, and since the 1980s obesity prevalence has increased threefold in many European countries (WHO 2018), to about 16% in 2014 across the EU member states (Eurostat 2016). However, obesity prevalence levels and trends vary substantially by gender and between European countries. Figure 1 illustrates this, using data from the NCD Risk Factor Collaboration Study (2016).

These trends are worrying, and raise the question of how obesity is affecting life expectancy levels and trends in Europe as a whole, and in different European countries. 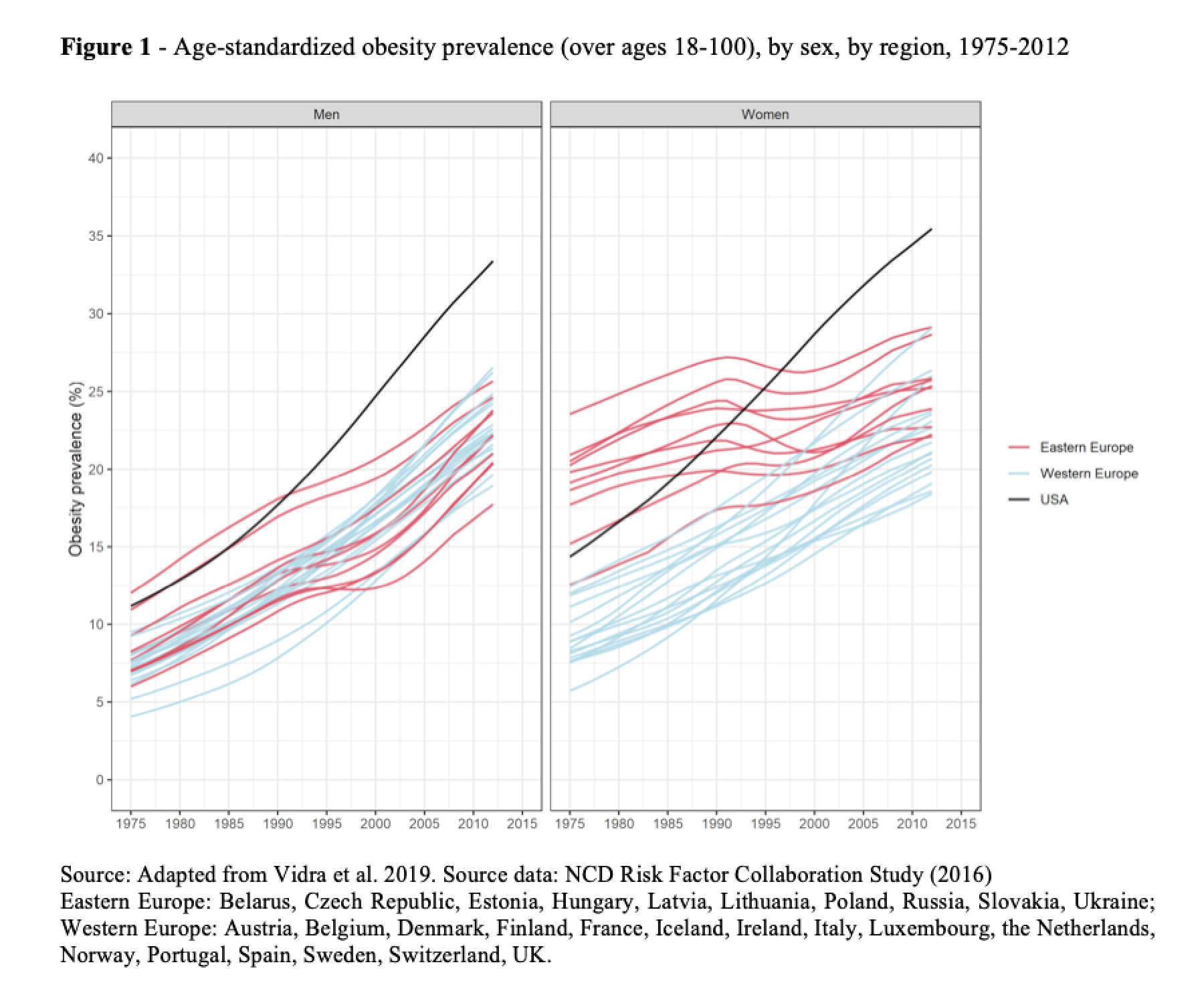 Impact of obesity on life expectancy levels in Europe

The impact of obesity on life expectancy levels in Europe is by no means negligible. In the 26 European countries studied by Vidra et al. (2019), the potential gain in life expectancy at birth (PGLE) in 2012 if obesity was eliminated ranged from 0.86 years (the Netherlands) to 1.67 years (Lithuania) for males, and from 0.66 (Switzerland) to 1.54 (Russia) years for females (Figure 2). In the USA, the impact was very large for men (PGLE of 1.73 years) and only slightly less so for women (1.44 years).

Impact of obesity on life expectancy trends in Europe

In all 26 European countries, obesity prevalence and the share of all-cause mortality due to obesity (obesity-related mortality) have risen over time. Their adverse impact on life expectancy levels and trends across Europe is increasing as a consequence. 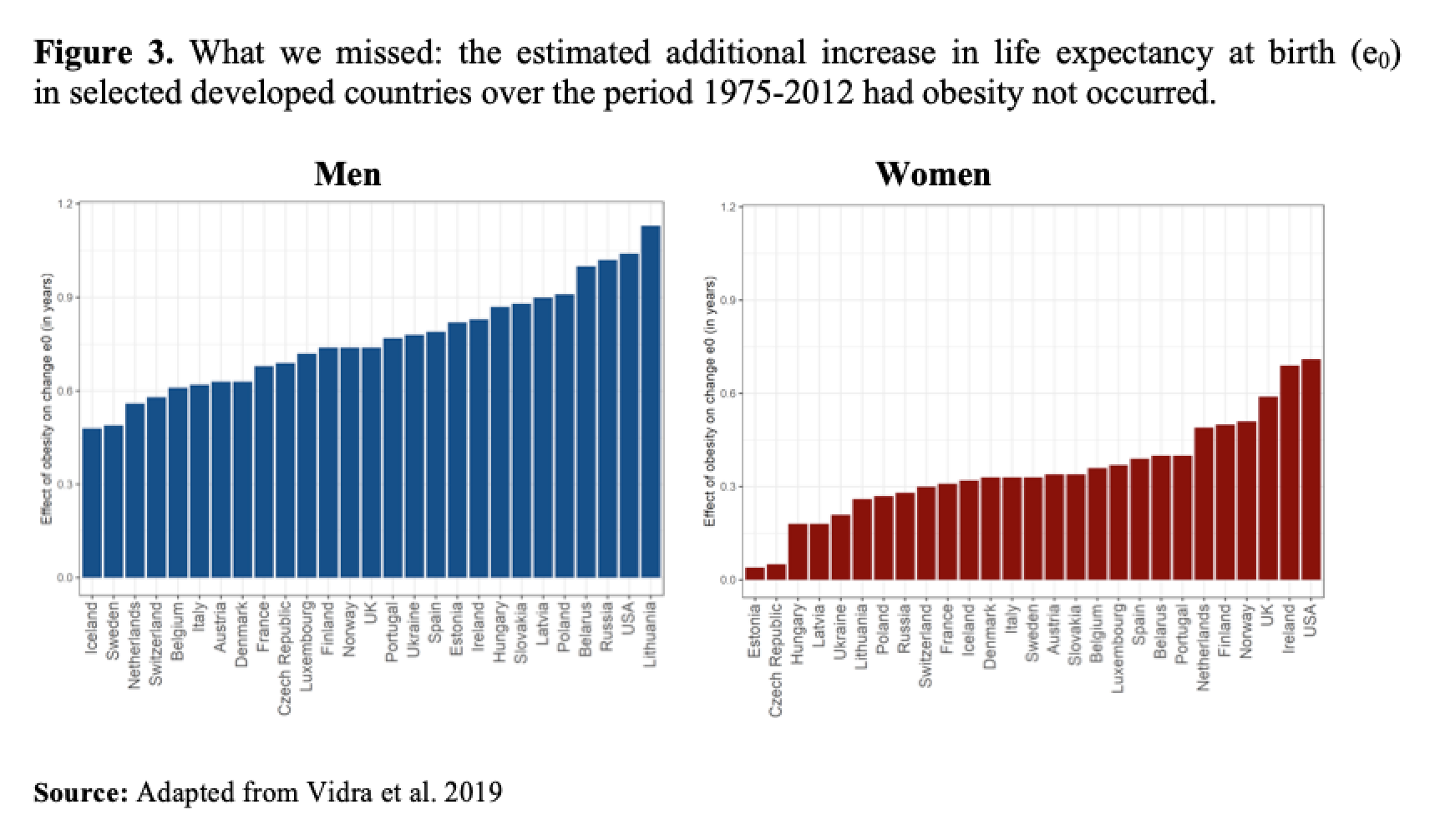 These country and sex differences reflect differences in the onset and the progression of the obesity epidemic. In Eastern Europe, obesity prevalence levels were already higher than in Western European countries in the 1970s and early 1980s (see Figure 1). This pattern has been linked to the relatively high total supply and intake of calories in Eastern Europe in those years (Silventoinen et al. 2004). Although these trends have stagnated, particularly among women (see below), Eastern Europe still has the highest obesity prevalence levels in Europe (Malik et al. 2013), particularly for women (see Figure 1).

The smaller mortality impact of obesity for women than men in 2012 is likely driven by different factors in Europe. Western European women, particularly those with high socioeconomic status (SES), are particularly likely to be health conscious, have healthy eating habits, follow nutritional recommendations (Fagerli and Wandel 1999), and perhaps also feel social pressure; they are less frequently obese than men. The reverse is true in most of the Eastern European countries included in our research, where obesity is slightly more prevalent among women (see Figure 1). Yet, for reasons that remain unclear, its mortality consequences are more severe for men.

The smaller impact of obesity on female life expectancy trends in Eastern Europe can be explained by the stabilization of obesity prevalence over the 1980-2008 period, especially in the 1990s (see Figure 1). This may be linked to poorer nutrition and decreased calorie intake resulting from the dramatic economic and political changes that affected these countries over the period (Silventoinen et al. 2004). For women with low SES especially, it may be related to their greater exposure to food scarcity and their higher energy expenditure (Monteiro et al. 2004).

Among the Western European countries studied, the UK and Ireland seem to be the forerunners in the obesity epidemic, and to closely follow obesity trends in the USA (Vidra et al. 2019). These countries share cultural characteristics related to dietary and exercise choices, such as widespread fast food consumption, an increasing prevalence of sedentary and inactive lifestyles, and extensive stigmatization of obese people (Donahue et al. 2018) which aggravates the health effects of obesity and hampers behavioural change.

Obesity clearly has an adverse effect on life expectancy levels and trends in Europe. The observed gender differences and cross-country disparities in the impact of obesity can be linked to contextual factors (economic conditions, diet, obesogenic environment), and to differences in people’s ability and capacity to adopt healthier lifestyles.

The rise in obesity prevalence will likely continue to slow down the increase in life expectancy, at least in the near future. Effective health interventions are needed to tackle the obesity epidemic and its increasing effects on public health.

This work is financed by the Netherlands Organisation for Scientific Research (NWO) as part of the research programme Smoking, alcohol, and obesity, ingredients for improved and robust mortality projections, grant no. 452-13-001.