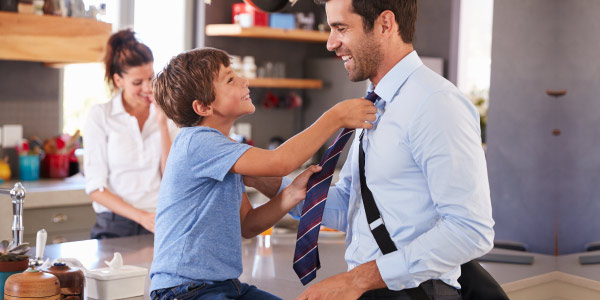 The birth of a child often entails adjustments to one or both parents’ employment position(s). These changes are not gender neutral as the share of women exiting the labour market or taking up parental leave in response to a birth consistently exceeds the share of men that do so. What are the reasons for this persistent gender asymmetry? To what extent is it determined by gender differences in partners’ pre-birth employment characteristics? As men more often have a higher wage and work more hours than their female partner, the higher incidence of female labour market exit and leave uptake at the aggregate level does not appear surprising. However, in our recent study (Wood & Marynissen, 2019) we show that while gendered employment exits are linked to within-couple differences in pre-birth employment positions such as wages, employment attachment and workplace size, the link between gender differences in parental leave uptake and pre-birth employment characteristics is much less clear.

In both cases, a question remains: would this gender asymmetry in parental employment strategies at the aggregate level change, or even reverse if pre-birth employment characteristics were switched between male and female partners? The results of such a simulation indicate that strategies would remain largely gendered at the aggregate level, in particular with respect to parental leave uptake. This suggests that the gender division of partners’ pre-birth employment characteristics cannot (fully) account for persistently gendered parental employment strategies: other factors, such as gendered parenting norms and gendered institutions are probably at play.

The unprecedented rise of the dual-earner model in Western countries has undoubtedly transformed the organisation of paid and unpaid work within households since the mid-twentieth century. However, it is often asserted that the shift towards gender equality has stalled or remains incomplete (England, 2010; Esping-Andersen, 2009). For example, labour market studies show that the negative impact of childbearing on employment is stronger for women. Potential explanations for this observation can be divided into two distinctive yet complementary strands. According to microeconomic theory, gendered divisions of labour reflect relative labour force potential. The partner with higher returns from employment is more likely to specialise in paid work, and – unless outsourcing is an option – the other partner in domestic work (Becker, 1991; Lundberg & Pollack, 1996). The second strand emphasises the importance of contextual factors, claiming that persistently gendered parenting norms and institutional setups yield gendered labour market responses to childbearing (Coltrane, 2000; Saxonberg, 2013).

Using unique longitudinal register-based Belgian panel data for 1999–2010, we ran multinomial regression models to study the development of parental employment and leave uptake strategies among 8,391 heterosexual couples who were dual earners prior to birth. The analyses distinguish between paid work reorganisation after first or higher-order births. The aim of our study is twofold:

The bars on the left side of Figure 1 illustrate the observed parental employment and leave uptake strategies (the simulation results on the right-hand side of the graphs will be discussed below). First, the overwhelming majority of dual-earner couples continue the dual earner model after childbearing, as all probabilities of employment exit are very low. Furthermore, for all parities, the probabilities of both employment exit and leave-taking are clearly differentiated by gender, with higher probabilities for women in both cases. The multinomial regression models assess the degree to which variations in these global patterns can be related to variations in couples’ relative pre-birth employment characteristics. 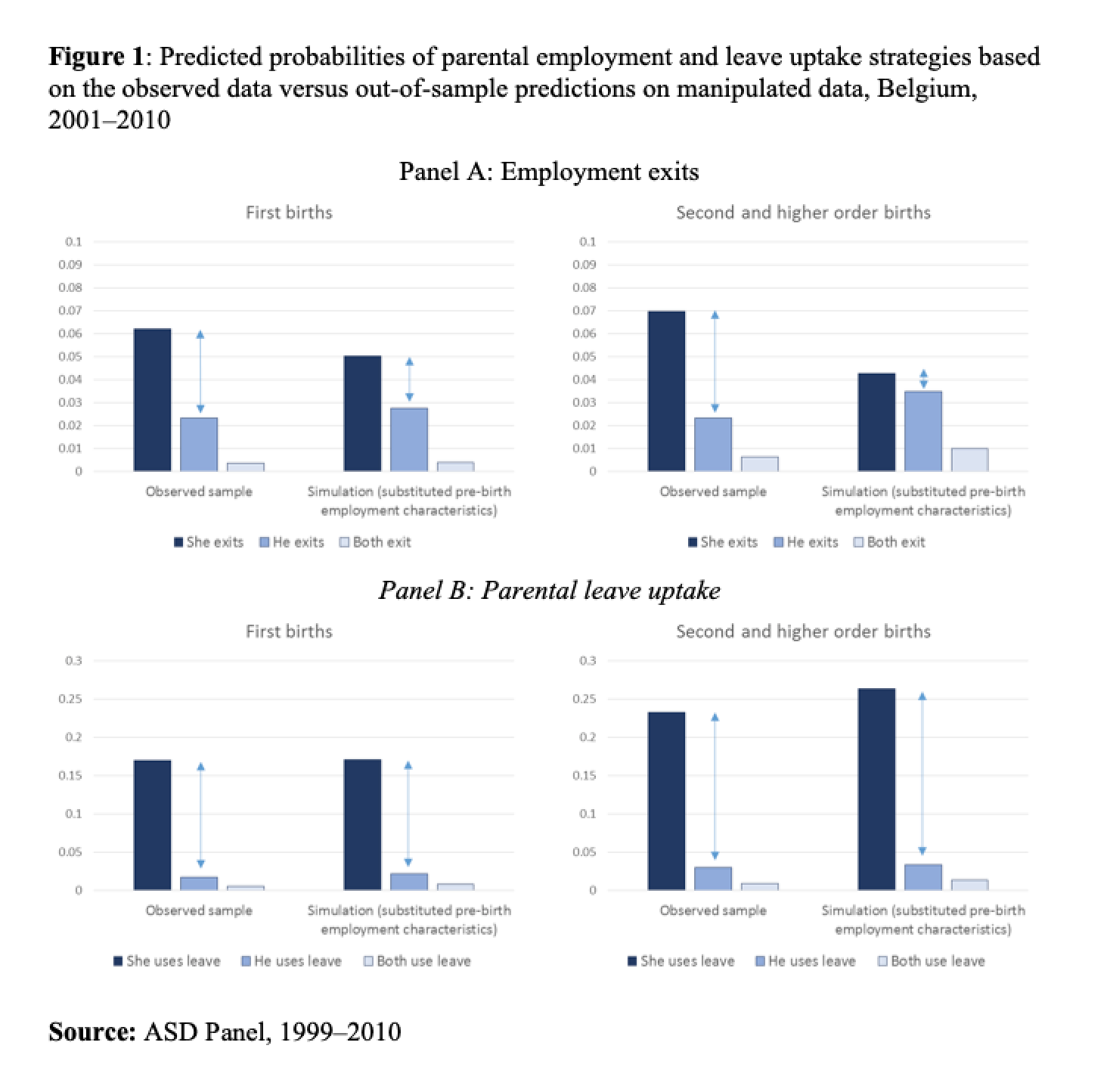 With respect to employment exits, in couples where the male partner has a higher pre-birth wage, more working hours, and a higher employment intensity (i.e. share of quarters in paid work in the 2 years preceding birth) than the female partner, a male exit is less likely than a female exit. In contrast, for couples in the reverse situation, a male exit is more likely. These findings suggest that couples’ parental employment strategies, more specifically regarding employment exits, are path-dependent upon previous employment positions.

In addition, an equivalent model assessing parental leave uptake was estimated. We expected that leave uptake would be encouraged by:

Our findings provide only limited and mixed support for these hypotheses, however, suggesting that couples typically adopt the general strongly gendered pattern in leave uptake (Figure 1, Panel B), regardless of their pre-birth employment characteristics.

What if gender differences in employment characteristics were reversed?

As dual earners’ parental employment strategies seem to be path-dependent on previous employment positions, at least to some degree, would they change substantially if the gender distribution of partners’ pre-birth employment characteristics were reversed? Simulating parental strategies for a sample in which all parents are assigned their partner’s pre-birth employment characteristics, the right part of the graphs in Figure 1 indicates that the labour market response to childbearing would become considerably more gender equal. This finding is illustrated by the decreasing gender gap in employment exits (Panel A) in the simulation. However, even under this extreme hypothetical situation, our models predict that the male breadwinner model would still prevail. They also indicate that parental leave uptake (Panel B) would remain almost unchanged and highly unequal. Hence, even in a context like Belgium, with its relatively strong work-family reconciliation policies, childbearing exacerbates the traditional gender roles that embrace male-oriented employment strategies and female leave-taking. This finding suggests not only that gendered parenting norms persist but also that genderising design features of parental leave may play a role, for instance when parental leave benefits are low or when maternity and paternity leave are of different durations (Saxonberg, 2013).