Do birds of a feather really flock together?* 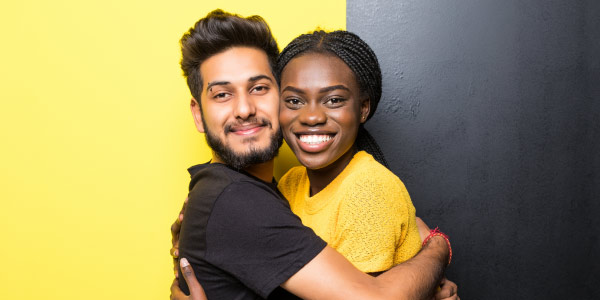 Ethnic minorities are on the rise in Europe (Zimmermann 2005), and their lives, and those of their descendants, have been amply analysed, including, of course, family formation processes. Trends in inter-ethnic marriage (marital unions between members of different ethnic groups) are of particular interest, because they are generally seen as a mechanism to promote integration and as an indicator of existing integration in the European context (Dribe and Lundh 2012; Milewski and Kulu 2014). From the presence, absence and distribution of inter-ethnic marriage among migrant groups, researchers hope to make predictions of integration success, or, in another interpretation, to understand the mechanisms of exchange of social and economic status between partners with different ethnic backgrounds (Azzolini and Guetto 2017).

Intermarriage in the UK

In general, partner preferences are shaped by personal as well as contextual factors (Kalmijn 1998). Individuals often prefer a partner of similar status, education and cultural background, but these preferences are influenced and constrained by contextual factors such as sex ratio, group size and residential proximity. This is critical for ethnic minority groups as their size, geographic segregation and age- and sex-composition might hinder marital endogamy (union of two similar partners). If this is the case, native partners may represent an acceptable alternative, especially if they appear to be socially and economically similar.

We investigated this in reference to the UK, using the first wave of the Understanding Society Longitudinal Household Study (2009), which includes a detailed retrospective questionnaire on partnerships and marriages, and also a large Ethnic Minority Boost sample. For our analysis we extracted first marriage records of over 35.000 individuals, including British nationals (defined here as individuals born in the UK to UK-born parents), immigrants (individuals born outside the UK) and migrant descendants (individuals born in the UK with at least one parent born abroad). Immigrants and their descendants were analysed separately by five ethnic groups (Europe and other Western countries, India, Pakistan and Bangladesh, Caribbean and other). We calculated the first marriage risk for either having a partner of the same or a different ethnic group, between the ages of 15 and 45, for men and women separately.

Except for European immigrants, most people in the dataset married a co-ethnic partner. The difference between co-ethnic and intermarriage risks varies across ethnic groups. In general, preference for a co-ethnic partner is stronger among immigrants than among their descendants. The unadjusted rates are higher for women than for men, as women tend to be younger than their partner at the time of marriage (a woman aged, say, 44 years may marry a man aged 48, while the reverse is unlikely) (Figure 1). 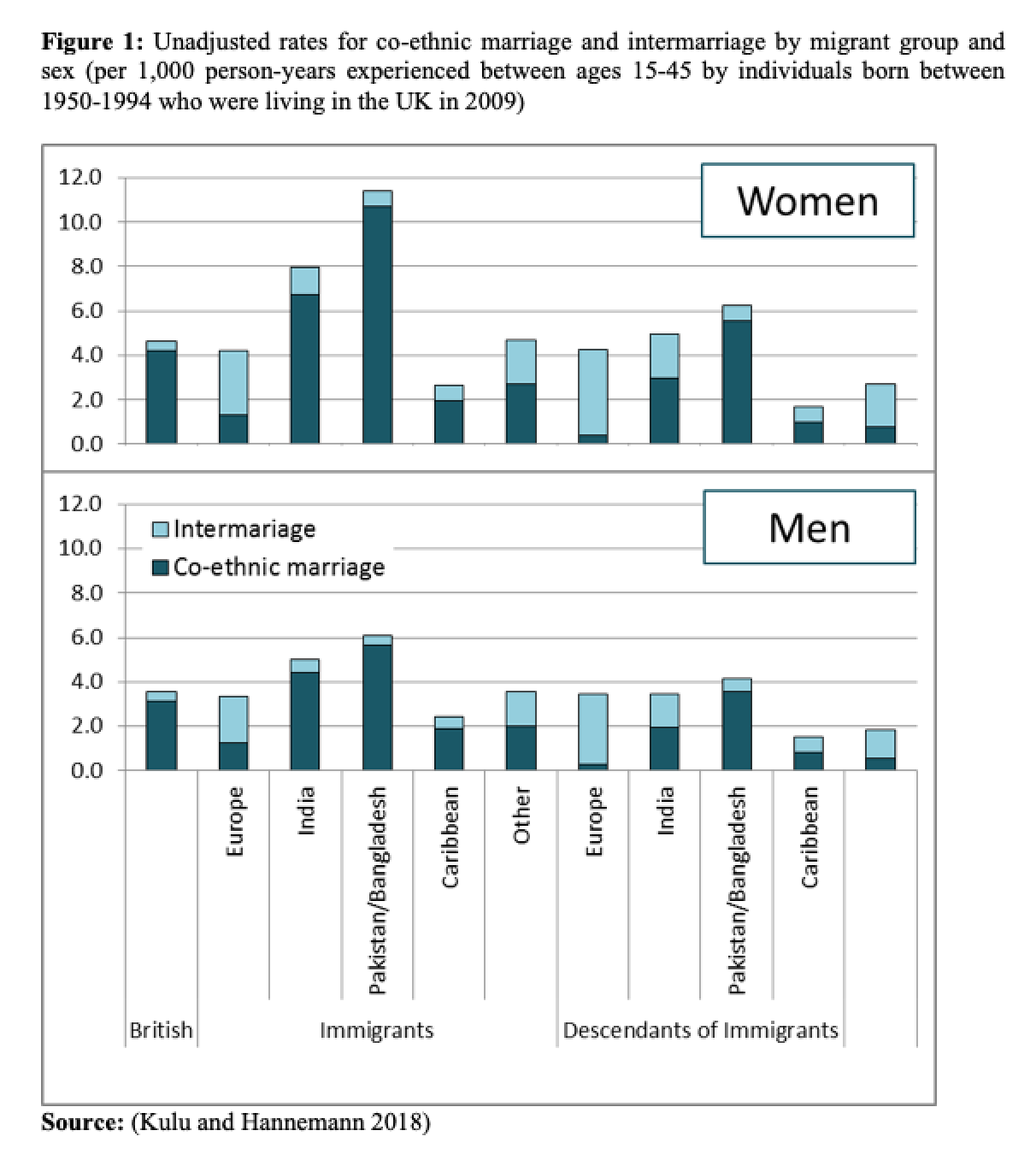 Partner choice is strongly influenced by the socio-economic characteristics of the potential marital partners. To account for at least some of those we included age of the individual, birth year, education, English skills, importance of religion, number of siblings and if the marriage took place before or after migration. The initially large differences across ethnic minority groups decline when all of these factors are taken into account; however, a strong pattern of differences remains. (Figure 2) 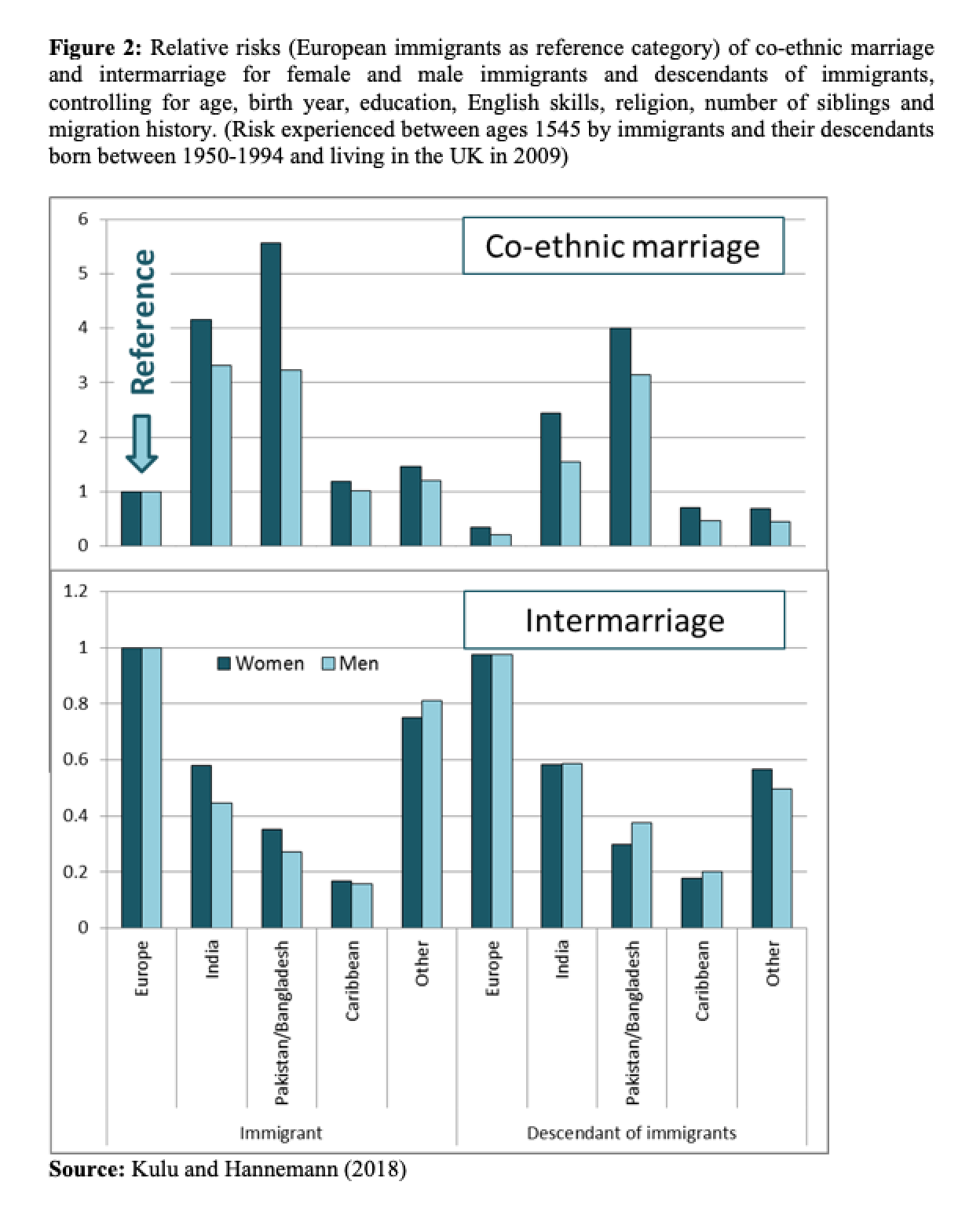 Immigrant men and women from India, Pakistan and Bangladesh showed the highest tendency to marry a co-ethnic partner while Europeans showed the highest intermarriage rates across all ethnic groups. Caribbean immigrants displayed low marriage rates regardless of the partner’s ethnic background. This pattern persisted for the descendants of immigrants, but less markedly. For immigrants and their descendants, lack of English skills and greater importance of religion in their lives increased the tendency to marry a co-ethnic partner while tertiary education reduced it. The impact of these socio-economic factors changed when we investigated the British population. The lowest and highest educated individuals, men especially, had a lower risk of marrying a co-ethnic partner, while having a tertiary degree increased the likelihood of intermarriage for men .

Although not shown in Table 1, religion too seems to matter. When it plays an important part in their life, native women tend to marry a British partner (actually, these women may have higher marriage rates in general, but we can’t tell for sure, because their higher rates of intermarriage are not statistically significant). For more religious British men, on the other hand, the risk of intermarriage is higher. 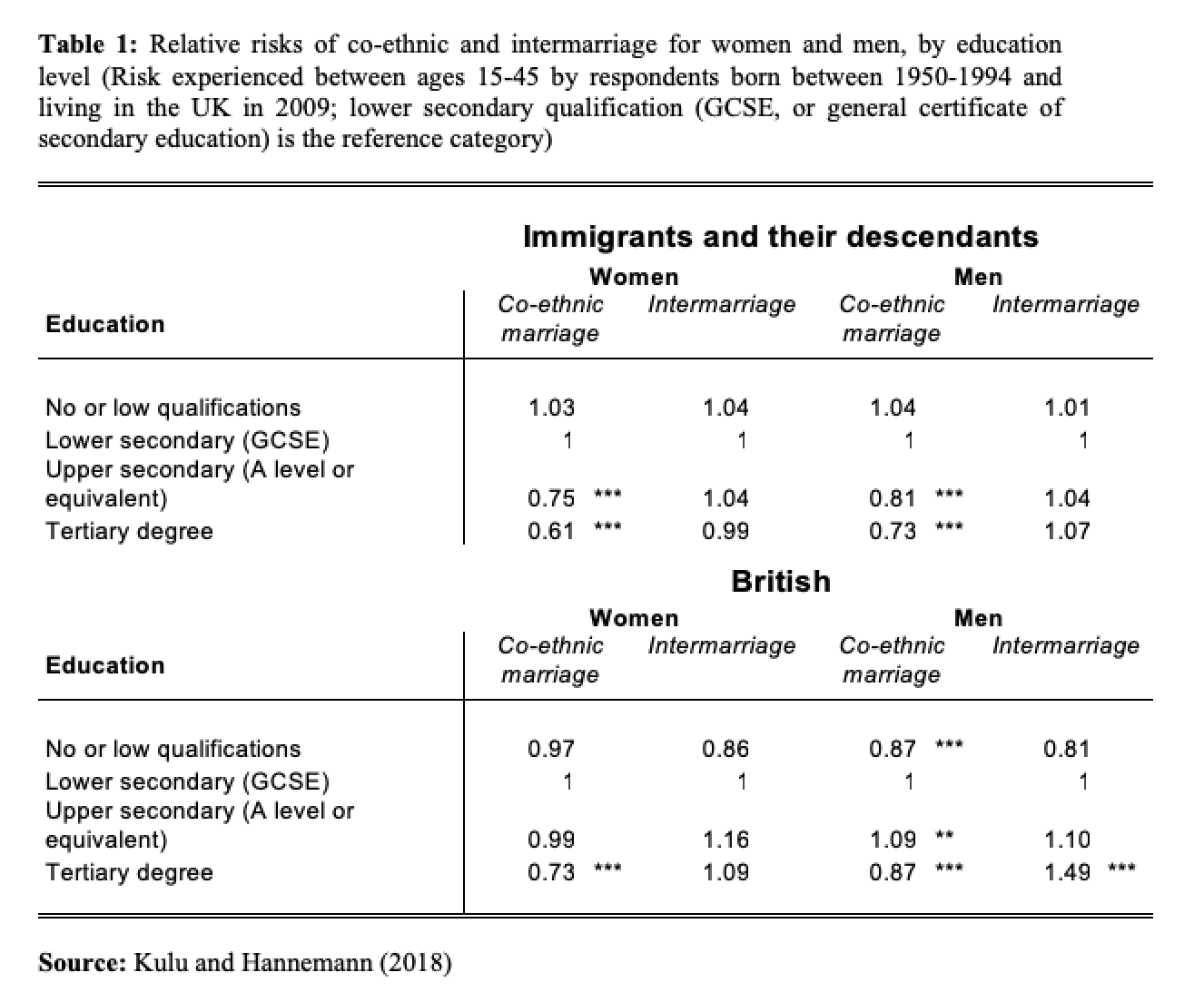 With a few exceptions (European immigrants and their descendants), co-ethnic marriages are still the dominant partner choice among male and female immigrants in the UK, and, albeit to a lesser degree, among their descendants. This general pattern is of course influenced by several individual socio-economic characteristics, such as religion and education, but their effect varies by gender and ethnic group, without any clear pattern.

Cohabitation has unfortunately been left out of this picture for lack of information, but as it is still a rare phenomenon among most immigrants, this omission is unlikely to bias the general picture (Hannemann and Kulu 2015). In the future, it will also be interesting to investigate if, and by how much, policy changes will affect family formation processes across UK’s migrant groups and their descendants. “Brexit” is probably what most of our readers will think of: keep in mind, however, that the majority of the UK’s immigrants are of non-European origin and will therefore be scarcely affected by it.