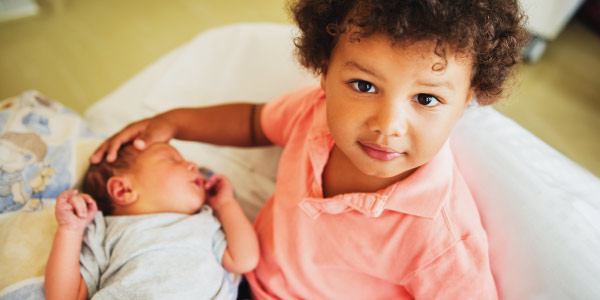 The WHO recommends that women wait between two and three years after the birth of a child to become pregnant again, yet about one-third of non-first-born children in developing countries are born within two years of their older sibling. Decades of research, mostly from low-income countries, have shown that children born at least two to three years after their older sibling have a significantly lower probability of infant mortality, premature birth, and low birth weight (Conde-Agudelo, Rosas-Bermúdez and Kafury-Goeta 2006; Conde-Agudelo et al. 2012). This is because short intervals do not allow women to fully recuperate from previous pregnancies, and closely spaced children may be more at risk from the same sets of infectious diseases. Some recent studies of wealthy populations have found no relationship between birth spacing and perinatal outcomes, however, and have argued that the current consensus may be a result of flaws in previous research designs (Class et al. 2017; Hanley et al. 2017).

Most research on birth spacing has studied if children born following shorter intervals were more likely to experience adverse outcomes, such as infant mortality, while controlling for observable individual and family characteristics. This kind of analysis can be problematic, however, if short birth intervals are also more common among women with characteristics that are both hard to measure and possibly related to the risk of infant mortality, like infant feeding practices or poor health. Without adjusting for these unobserved characteristics, it is impossible to know if birth spacing really does directly influence infant mortality. Some recent studies on high-income countries have compared differences in birth spacing and other infant health outcomes between siblings, which can rule out confounding by unobserved family characteristics. However, the application of a different methodology makes it difficult to compare the findings across different studies.

My own previous work on birth spacing and infant mortality in modern Bangladesh and historical Stockholm had shown that birth spacing can matter even when applying sibling models (Molitoris 2017, 2018), which led me to suspect that birth spacing may be important for infant health, but not equally across all contexts.

This hypothesis was tested in a recent publication using over 200 waves of Demographic and Health Survey (DHS) data on 4.5 million births in 77 low- and middle-income countries covering the years 1986 to 2016 (Molitoris, Barclay and Kolk 2019). Our study had two main goals. First, we wanted to use the same statistical models that were used in wealthy populations to test whether the spacing between children predicts infant mortality. Second, we wanted to test whether the importance of birth spacing varies by level of development. Although the DHS is focused on relatively poor countries, the overall levels of development vary widely both across countries and over time.

We found that children who were born less than two years after the birth of their older sibling were significantly more likely to die in their first year of life (Figure 1). In our data, 33% of children were born following an interval shorter than two years, but they made up over 50% of all infant deaths. Compared to a child born following an interval of three years, children born after one or two years had three and two times the risk of infant mortality, respectively. After approximately four years, longer birth intervals continued to reduce the risk of infant mortality, but to a much smaller degree. Our findings therefore supported the WHO (World Health Organization) recommendations to space births at least three years. The WHO also suggests that women should not wait more than five years to conceive their next child, but we did not find any evidence that birth intervals longer than this were related to increased risks for children. 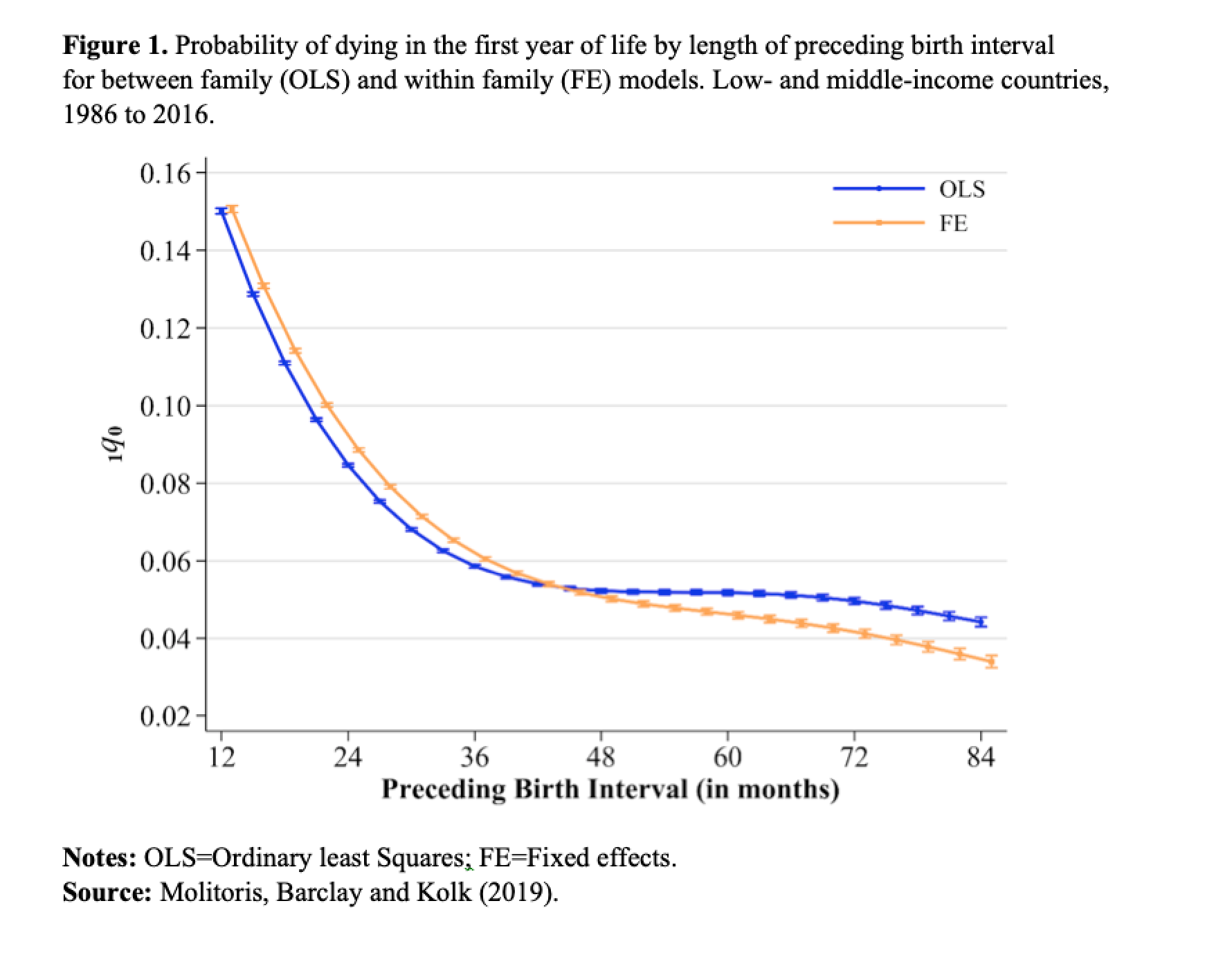 To evaluate how the importance of birth spacing varies by level of development, we calculated the percentage of deaths that could be avoided if birth intervals increased from 12 to 24 months and then plotted them against indicators of development, such as the national infant mortality rate, for every combination of country and birth year (Figure 2). 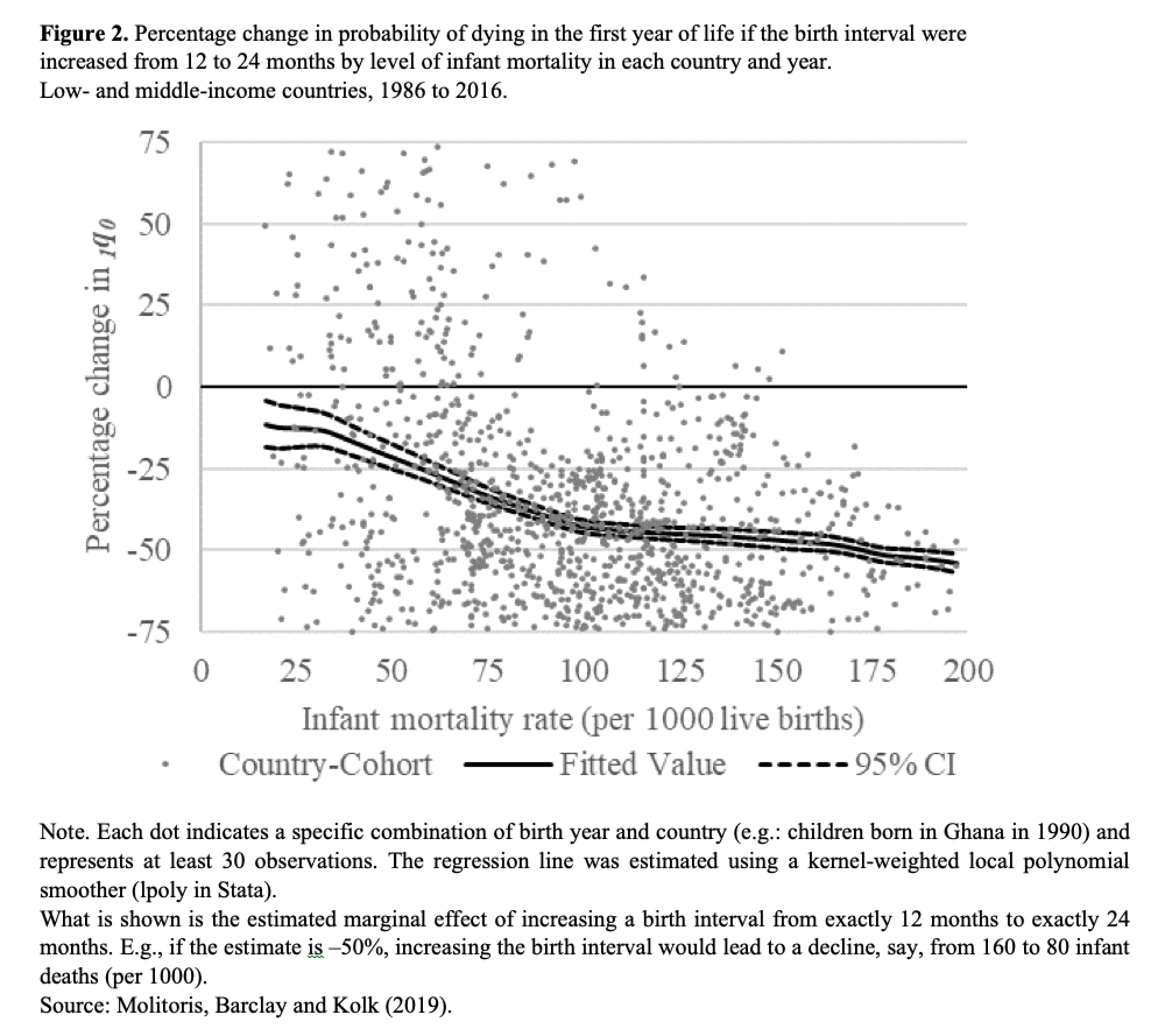 The message from Figure 2 is clear: when the overall level of infant mortality is high, there are large benefits to spacing births further apart. When infant mortality decreases, however, birth spacing becomes less and less effective at reducing infant deaths. If we extrapolate from these findings, we would expect, just as recent studies in high-income contexts have shown, that birth spacing should have little to no influence on infant health when populations are even healthier than those with the lowest infant mortality rates in the DHS data. Given the theoretical links between birth spacing and infant mortality, birth intervals should have a greater influence on infant health when populations are faced with higher burden of malnutrition or infectious disease, and our results are in line with those expectations.

Public health organizations and family planning programs should continue to place emphasis on longer birth spacing to accelerate the decline in infant mortality. Our findings are in agreement with current recommendations of spacing births at least three years apart. While there will always be children born after shorter intervals than this, extending the time between births by even just a few months can still drastically reduce the risk of infant mortality for those born below the three-year threshold. This is especially true for populations facing high levels of infant mortality. The incidence of short birth intervals in low-income settings could be reduced both by encouraging exclusive breastfeeding for the first six months postpartum, and by reducing the high level of unmet need for contraception in low-income contexts. Though accomplishing these goals is no simple task, these changes have the potential to shift the distribution of birth intervals upward and reduce the overall risk of infant mortality in the most vulnerable populations.

Conde-Agudelo, A., A. Rosas-Bermudez, F. Castaño, and M.H. Norton. 2012. “Effects of Birth Spacing on Maternal, Perinatal, Infant, and Child Health: A Systematic Review of Causal Mechanisms.” Studies in Family Planning 43(2):93-114.