Another reason why the fertility-contraceptive relationship has weakened* 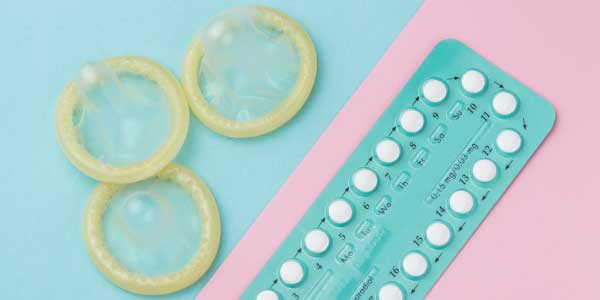 The association between contraception and fertility is one of the strongest among all the proximate determinants of fertility: every 15 percentage-point increase in the contraceptive prevalence rate (CPR) is associated with a reduction of 1 in the total fertility rate (TFR) (Mauldin and Segal 2015; Ross and Frankenberg 1993; Tsui 2001). Over the last decade, however, this relationship appears to have weakened. Impressive increases in contraceptive prevalence in a number of countries have met with less than expected declines in total fertility. Take Tanzania, for example, where CPR among all women has steadily increased. From Tanzania’s first Demographic and Health Survey in 1991 through its most recent in 2016, CPR increased from 10% to 32%, but TFR declined by only 1 (6.2 to 5.2) (Figure 1). Other countries in sub-Saharan Africa have also experienced rapid increases in CPR without commensurate declines in TFR. 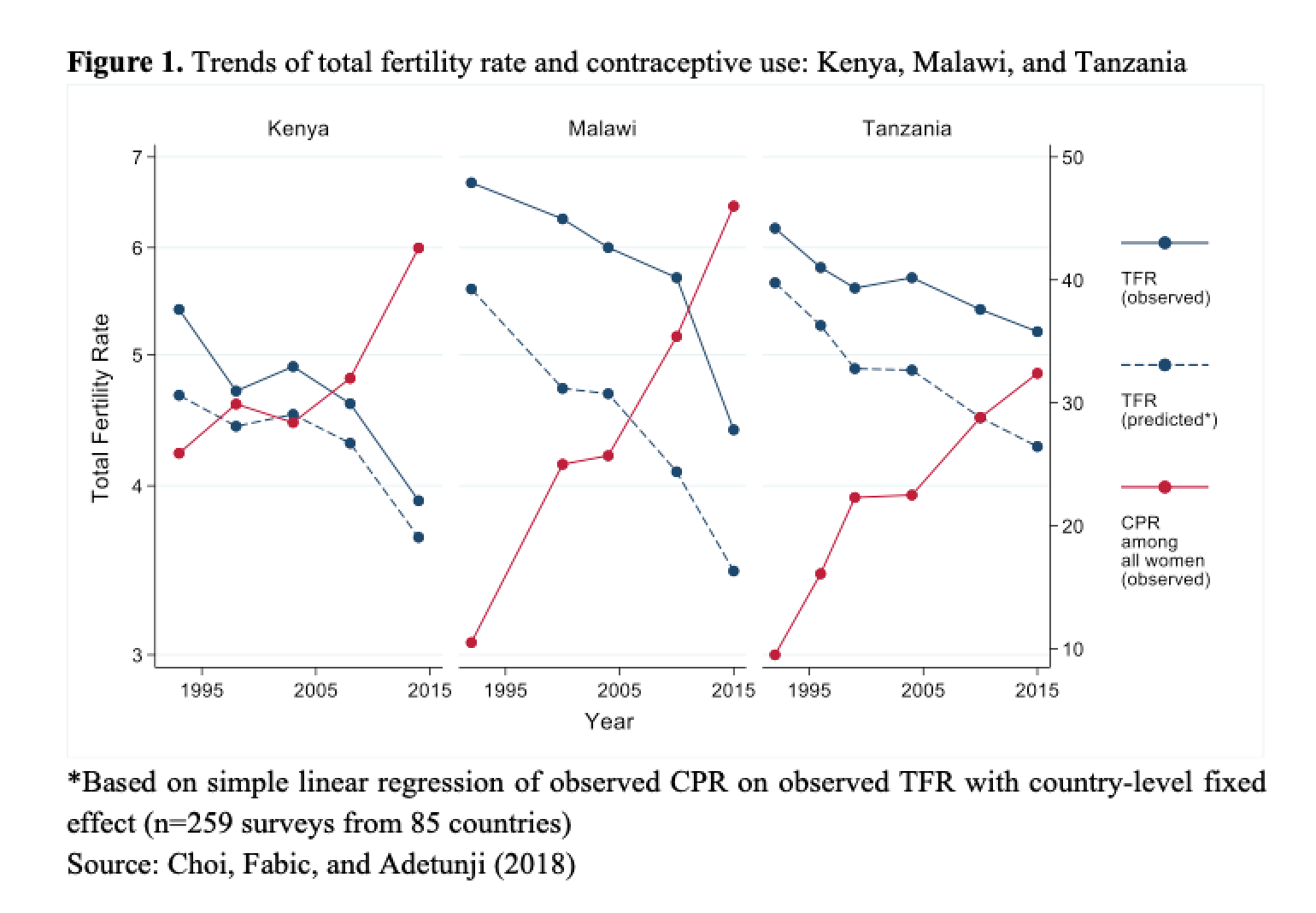 One factor that has not received as much attention is related to measurement mismatch. While TFR and CPR are both population-level measures, TFR is a synthetic cohort measure that is age-adjusted (it is calculated for different age groups and then aggregated), but CPR is not age-adjusted (it is calculated across all age groups combined). There are two major reasons why this age-adjustment ‘mismatch’ may now matter:

We explore the measurement mismatch factor in our recent research (Choi, Fabic, and Adetunji 2018), which aims to a) assess whether the associations between TFR and CPR have indeed changed over time; and b) examine whether the TFR-CPR relationship is stronger when we use an age-adjusted CPR measure. Our analyses employ Demographic and Health Surveys data from 259 surveys conducted in 85 countries (DHS Program API).

Associations between TFR and CPR have indeed changed

Age-adjusted CPR better explains the association between contraceptive use and TFR.

Following the synthetic cohort approach used for TFR calculation, we calculate age-adjusted CPR among all women of reproductive age. This is a synthetic measure of the percentage of women ages 15– 49 years who would be using a contraceptive method if they were to go through their childbearing years using contraception according to the current schedule of five-year age-group-specific contraceptive prevalence rates in their country. When we compare the linear relationships between TFR and CPR—using both the unadjusted and age-adjusted measure—we find that age-adjusted CPR better explains the variance in fertility data.

Examples from Dominican Republic and Egypt show how age-adjusted and unadjusted CPR can differ due to age patterns of contraceptive use and population age structure (Figure 2). 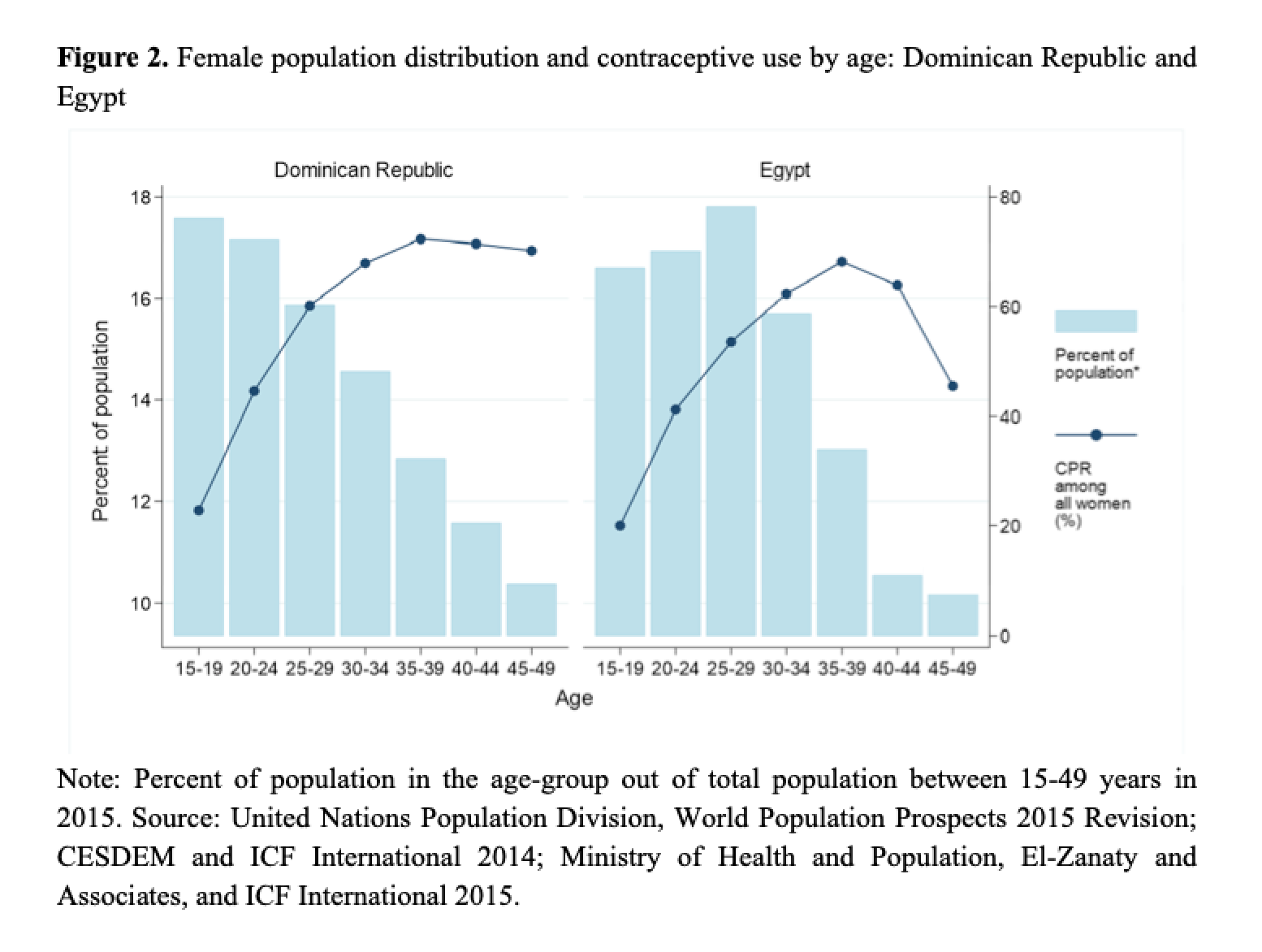