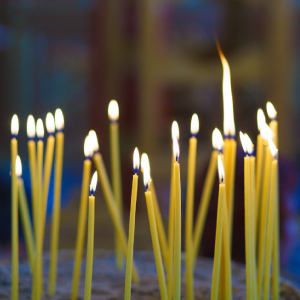 In the 2nd half of the 20th century significant demographic changes occurred in the majority of European countries, especially in terms of mortality decline. Russia and other post-Soviet countries, however, followed a different path: a stagnation in the mid-60s, followed by a growth until 1981, and then again some progress (decline) in mid-80s, just before the dramatic increase of the 90s, when mortality reached a peak in all age groups except infants. This paper focuses in particular on “youth mortality” (i.e. at ages 15-29 years) in Russia which happens to be much higher than in other European countries. Why?

Russia vs the rest of Europe 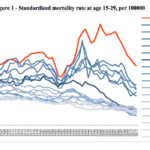 The convergence-divergence dichotomy (Vallin and Meslé 2004) is summarized in Figure 1. Due to an increase in Russia and steady fall in Western European countries, the gap in mortality rates between Russia and the rest of Europe. In 2012, latest available year with fully comparable data from the HMD (Human Mortality Database), three groups of European countries could be easily detected: Western countries with low youth mortality rates, Eastern countries with higher levels, and Russia, largely the first (meaning: the worst). 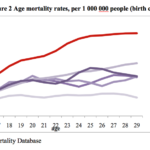 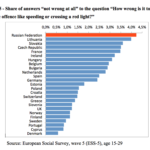 Youth mortality has frequently a peak at about 20 years or earlier, because of the “risky” behaviour of the (late) teen agers: not only sex, drugs and rock and roll, but also alcohol and, especially, careless driving. After this peak, mortality normally stabilizes and appears as a roughly flat, low level, line. 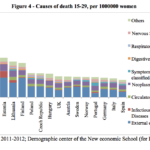 This is not the case in Russia, however (or in Belarus and Ukraine, for that matter), where mortality increases steadily with age (Figure 2).
Youth mortality is mostly mortality due to external causes of death: for men these typically account for 60 to 80% of the total (Figure 3); for women they normally range between 40 and 60% (Figure 4).

External causes (essentially traffic accidents and intentional self-harm), as well as diseases of the circulatory system, infectious and parasitic diseases (third place for Russia), are often the result of risky behavior of young people, which in turn can is connected to prevailing cultural values (Schwartz 2003). 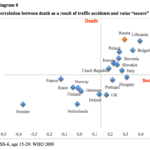 Using data from the European Social Survey, I found that in the countries with high youth mortality the most important values for the young (15-29 years) are self-enhancement (power and achievement) and conservation (security, conformity and tradition). Conversely, in the countries where the most important values for the young are openness to change (hedonism, stimulation, self-direction) and “self-transcendence” (universalism and benevolence) mortality is lower. Moreover there is a strong correlation between the causes of death and the values. For example, diagram 8 illustrates the correspondence between mortality from the traffic accidents and the importance of the value “secure”. High scores of the value “secure” mean that young people rely on government’s protection, and expect that the government will ensure their safety. 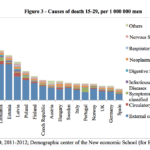 Unfortunately, traffic accidents depend less on government benevolence than on the drivers’ responsibility, which is arguably enhanced if they worry about the others, too. Of this concern, values as universalism and benevolence appear to be better predictors.
Not surprisingly, according to the ESS data (wave 5) traffic-related mortality is higher when more people tend to think that it is not (at all) wrong to commit a traffic offence like speeding or crossing a red light (Figure 5). Attitudes like may easily transform into risky behavior and, ultimately, higher mortality, especially among the young.