Where, in India, is hospital birth safer for babies than home birth?

India contributes more neonatal deaths to global NNM (neonatal mortality) than any other country. Yet, India’s national NNM of 30 per 1000 (IIPS and ICF 2017) masks wide spatial variations: among states with more than 25 million people, Uttar Pradesh had the highest NNM at 45 per 1000, and Kerala had the lowest at 4 per 1000. Figure 1 shows state level variation in NNM in India, and changes between 2005 and 2015. India’s state-level variation in NNM is similar to the country-level variation that exists on a global scale: according to the 2015 World Development Indicators, the Central African Republic had the second highest NNM in the world at 43 per 1000, while the United States had an NNM of 4 per 1000 (World Bank Group 2015). 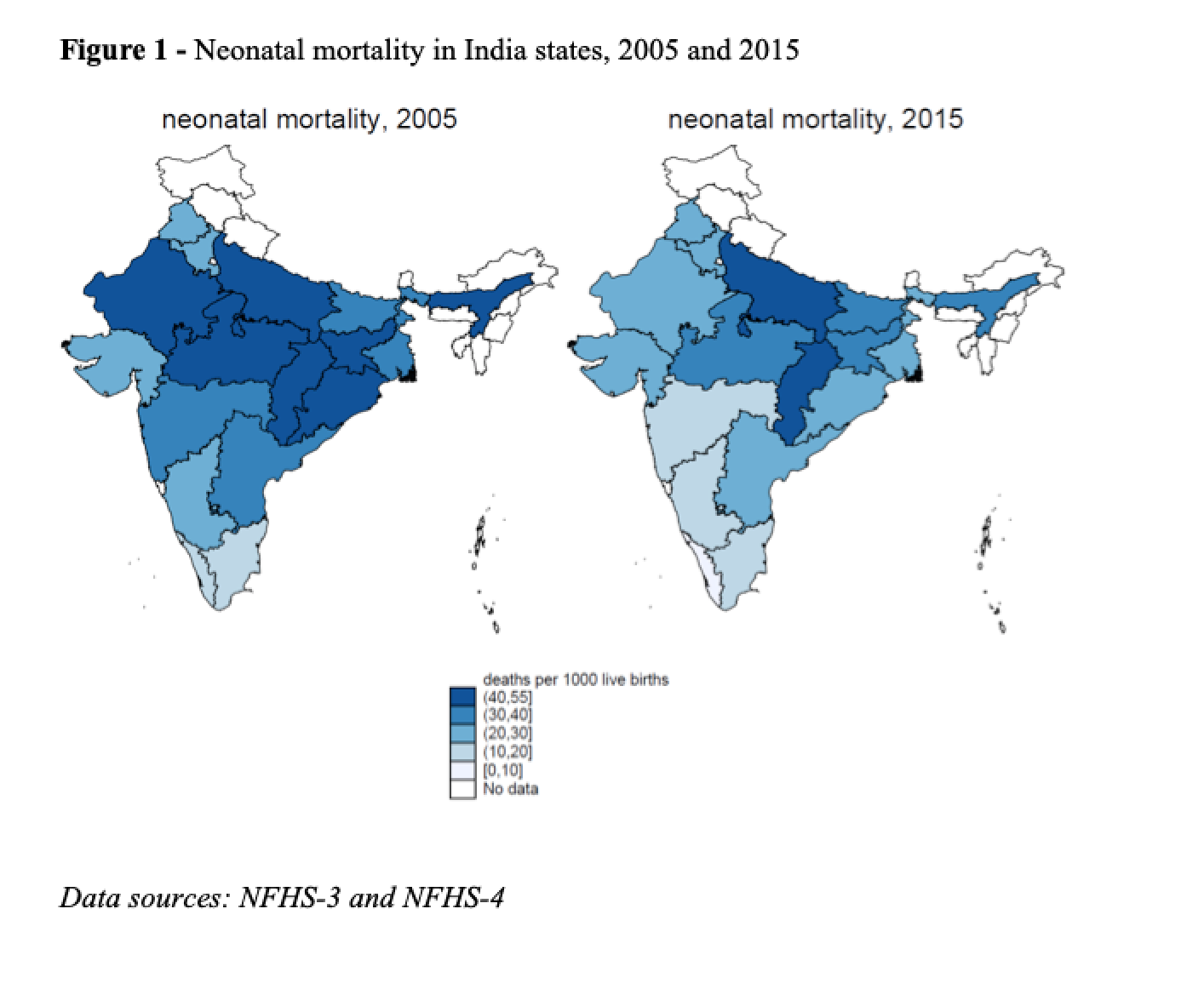 A key assumption of JSY, and of much of the Indian government’s maternal and child health strategy, is that shifting births from homes to health facilities will reduce NNM (Rao 2017). However, this assumption has rarely been probed, and may not be correct in all times and places. For instance, in India’s National Family Health Survey (NFHS)-3, collected before JSY was implemented in 2005, there was little difference in neonatal survival between babies born at home and those born in health facilities.

In new research using data on states with populations of more than 25 million from India’s National Family Health Survey, 2015-2016 (NFHS-4), I seek to advance understanding of the association between neonatal survival and facility birth (Coffey, 2019). I find that, on average, in an uncontrolled analysis, NNM was 12 per 1000 lower among children born in health facilities than among children born at home. However, there was important regional variation in the association between NNM and facility birth.

The association between NNM and facility birth differs by region

Figure 2 plots associations between NNM and facility birth that control for a child’s village (rural) or census block (urban), as well as a host of child, mother, and household-level demographic and socioeconomic characteristics (see Coffey, 2019). These controls are important because the uncontrolled association between NNM and facility birth may reflect omitted variables about the socioeconomic situation of the child’s family or neighborhood, rather than a positive effect of being born in a hospital. 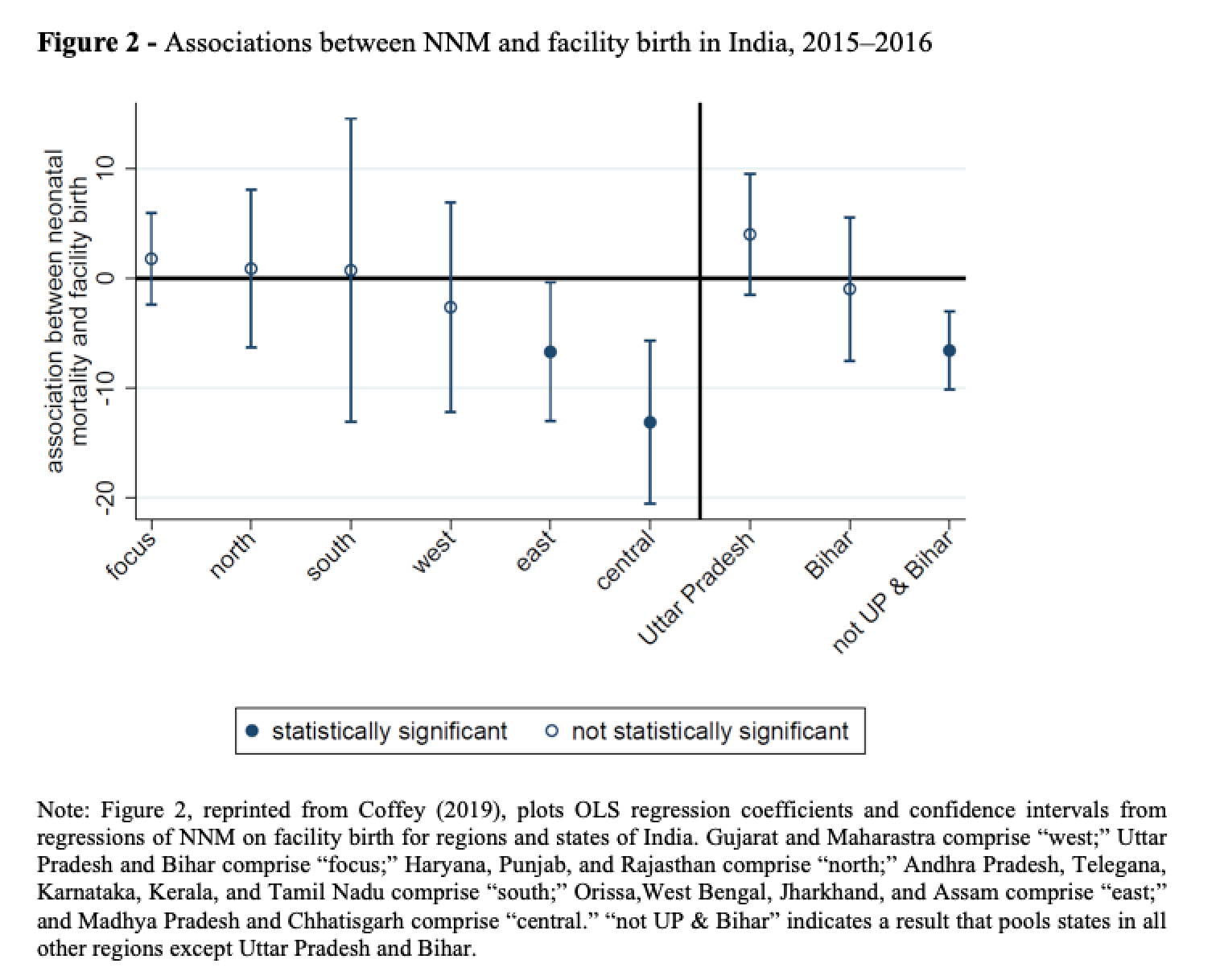 Perhaps the most striking result presented in the Figure is found on the right side. In a pooled regression using data from all of the regions except for Uttar Pradesh and Bihar, the association between neonatal death and facility birth is negative and statistically significant: NNM is about 7 per 1000 lower for births in a health facility than for home births. For Bihar, however, the relationship is slightly negative but not statistically significant. The point estimate for Uttar Pradesh is positive, and the confidence interval on the estimate does not overlap with that for the pooled estimate for the other regions.

Policy relevance and the need for further comparative research

Considering that promoting facility birth has been the cornerstone of maternal and newborn health policy in India for much of the last decade, the finding that facility birth is uncorrelated with neonatal death in Uttar Pradesh and Bihar – which together contribute 43% of India’s neonatal mortality – is concerning.

The robust, negative association between neonatal death and facility birth in the east and central regions is, however, encouraging, and suggests that the JSY program may have had heterogenous effects. These regions saw much larger improvements in NNM in the last decade than were observed for Uttar Pradesh and Bihar. Robust associations between neonatal death and facility birth are consistent with evidence from the Million Deaths Study, which studied changes in causes of death between 2000 and 2015 in partnership with India’s Sample Registration System (Fadel et al. 2017). The study found that declines in NNM came primarily from declines in birth trauma and birth asphyxia, which are causes of neonatal death that could plausibly be influenced by care at birth in a health facility. Future research should compare how delivery and postpartum care practices differ between the central and east regions and the states of Uttar Pradesh and Bihar.

Coffey, Diane. (2019). The association between neonatal death and facility birth in regions of India. Demographic Research. 40: 417-430.

Coffey, D. (2014). Costs and consequences of a cash transfer for hospital births in a rural district of Uttar Pradesh, India. Social Science & Medicine, 114:89–96.