While the subject of adolescent motherhood has garnered much interest, few studies have observed the fertility of young first-time mothers following their entry into motherhood. In a recent article (Tomkinson 2019), I show that in two countries with differing levels of adolescent childbearing, France and England and Wales, these mothers remain distinct from older first-time mothers over the course of their reproductive lives.

The number of children born per woman in France and in England and Wales has evolved similarly since the middle of the last century. Fertility levels in these countries have resisted the decline seen elsewhere in Europe, and even rose in the 2000s, remaining high within the European context, with a current TFR of around 1.8 children per woman (Figure 1). 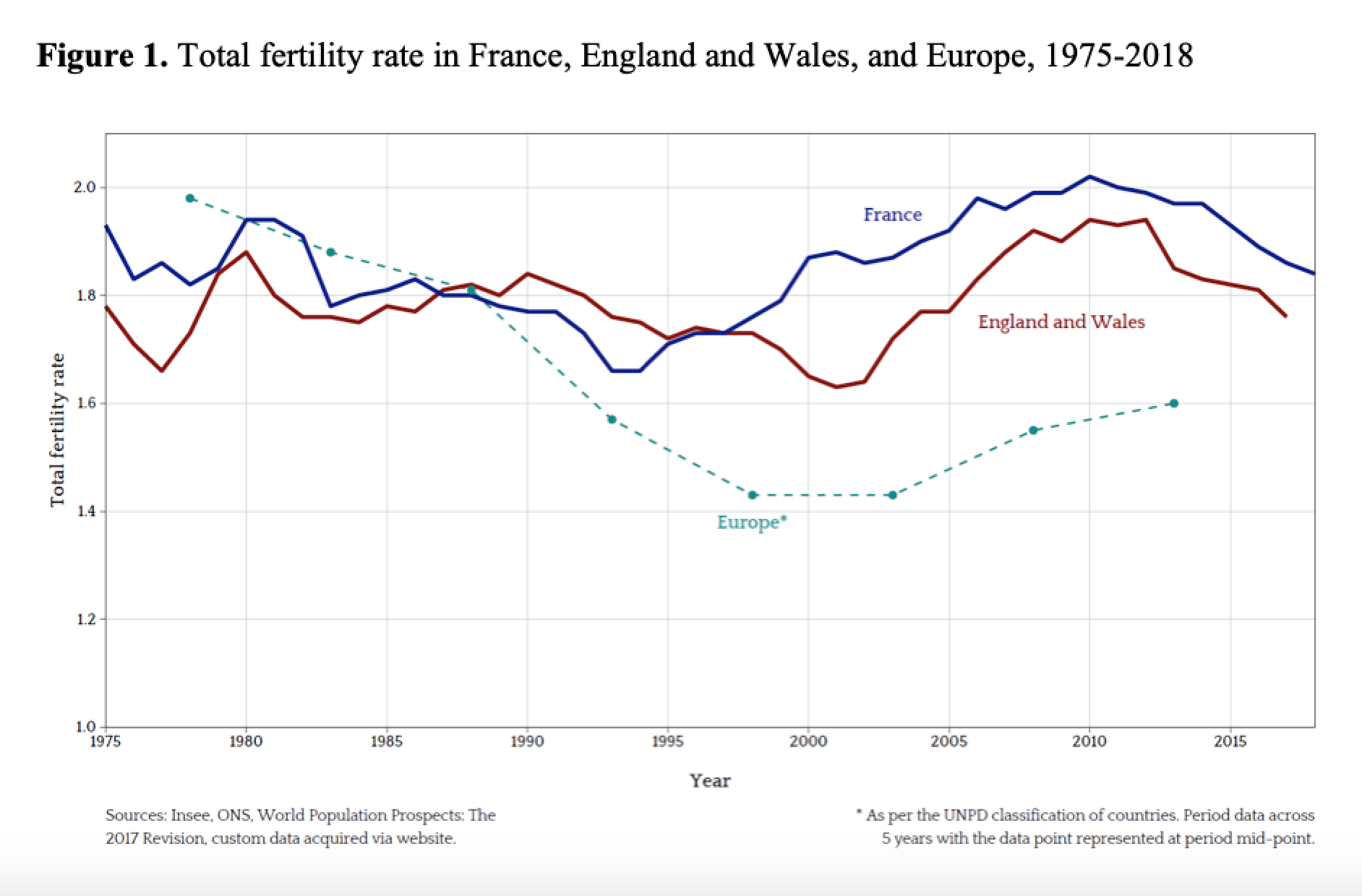 While the number of children born to women in each country is similar, the timing of childbearing and especially of entry into motherhood is distinct, with a far greater proportion of women giving birth to their first child during adolescence (aged 18 years and under) in England and Wales. For women born between 1959 and 1976, despite a rise in median age at first birth, the proportion of women in England and Wales who became a mother during adolescence fluctuated between 7% and 8%, compared to a continuous decrease in the proportion of French women, which fell from 6% of those born in 1959 to just 2% of those born in 1976. This represents a widening gap between the countries, with adolescent motherhood remaining prevalent in England and Wales while becoming increasingly atypical in France.

The earlier a woman has her first child, the more children she will have

In both countries, there is a strong relationship between age at first birth and completed fertility, with adolescent mothers having the highest fertility levels (Table 1). This relationship is remarkably similar in France and in England and Wales, and remains stable across birth cohorts having completed their fertility. In both countries, each cohort of adolescent mothers has had at least 3 children on average. This figure represents 0.5 children more than the next group of youngest first-time mothers (first birth between ages 19 and 24), and almost 1.5 children more than the oldest first-time mothers (age 30 and over).

A longer and shifted reproductive career

While adolescent mothers have a higher quantum of fertility on average, they have their subsequent children at a slower tempo than older first-time mothers. In both countries, among mothers having had an equal number of children, birth intervals at equivalent parity decrease as age at first birth increases – an example of time squeeze, whereby older first-time mothers with less time to achieve their desired fertility have their subsequent children at a faster tempo (Kreyenfeld, 2002).

The combination of a higher number of children and a slower tempo of subsequent fertility lengthens adolescent mothers’ reproductive careers. Not only are their reproductive lives longer on average, but they also occur at a different stage of the life course as a result of their early entry into motherhood. The fertility of adolescent mothers in both France and England and Wales is largely concentrated in their twenties as a result of their young age at first birth and the arrival of a second child two to three years later (Figure 2). Adolescent mothers thus experience the early period of motherhood in life contexts that differ from those of older first-time mothers. When their first child is born, adolescent mothers are likely still acquiring human and economical capital in the transition to adulthood: their secondary/tertiary education remains uncompleted, they have yet to secure gainful employment, they are still living in the parental home, etc. I postulate that for this reason, the temporality of adolescent mothers’ reproductive lives is likely to be linked to the frequently reported difficulties that they face in their social, familial and professional trajectories (higher unemployment, more single motherhood, difficulty in accessing housing, etc.). 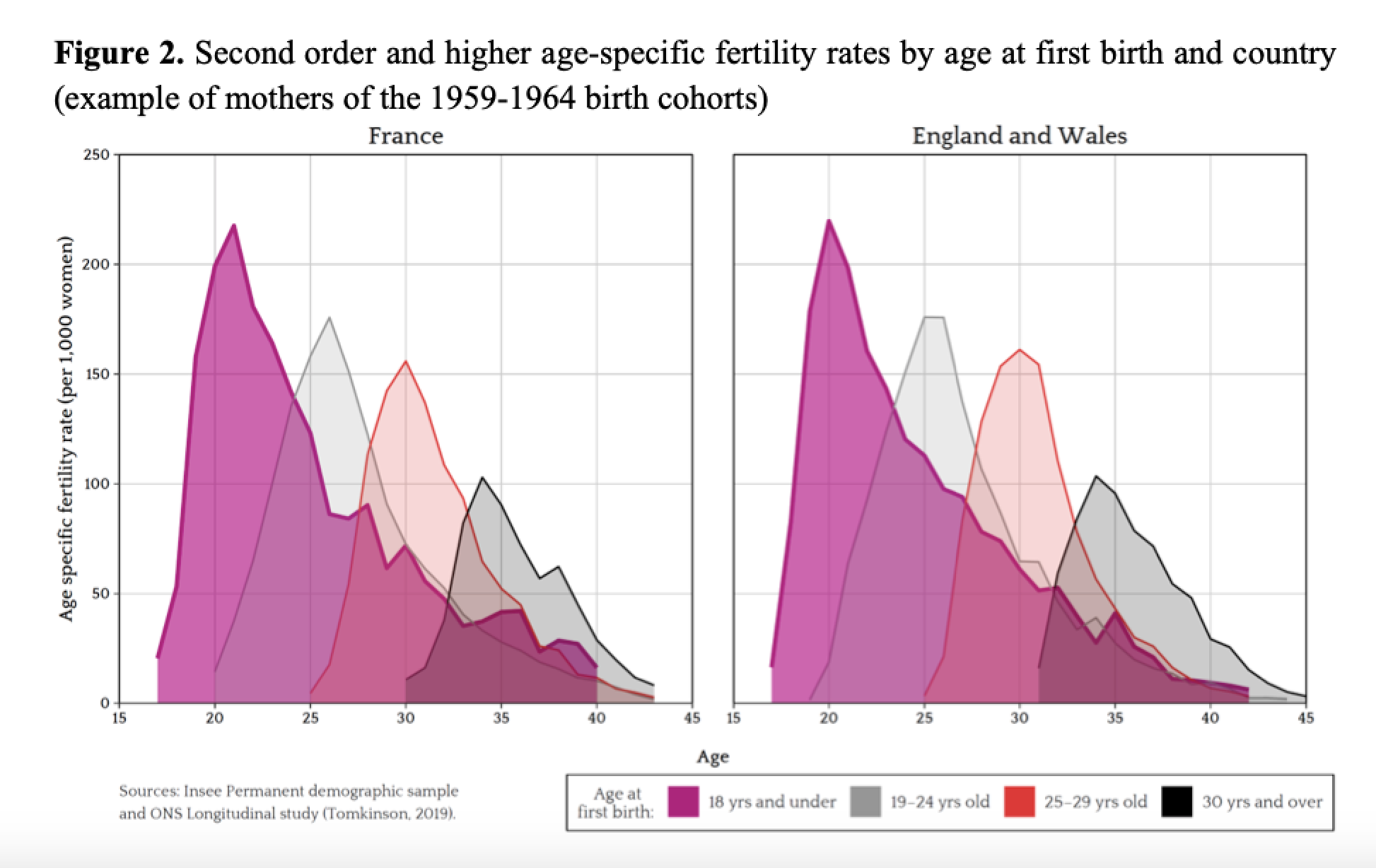 The shifted reproductive career of adolescent mothers also hints at the importance of the status of motherhood. While their early entry into motherhood represents a break from the norms of both adolescence and motherhood, the fact that the shapes of their subsequent fertility curves broadly resemble those of older first-time mothers suggests that the identity of being a mother dominates that of being a young woman in their subsequent childbearing.

This research, whose results were first published in Demographic Research, has benefitted from the financial support of the labex iPOPs, organised by the Institut national d’études démographiques (INED), under the reference ANR-10-LABEX-0089, in the context of heSam Université; of a public grant overseen by the French National Research Agency (ANR) as part of the “Investissements d’avenir” program (reference: ANR-10-EQPX-17 – Centre d’accès sécurisé aux données – CASD); and of the Big_Stat project funded by the French National Research Agency (grant “ANR-16-CE41-0007-01”).

The permission of the Office for National Statistics (ONS) to use the Longitudinal Study is gratefully acknowledged, as is the help provided by the staff of the Centre for Longitudinal Study Information and User Support (CeLSIUS). CeLSIUS is supported by the ESRC Census of Population Programme (Award Ref: ES/K000365/1). The author alone is responsible for the interpretation of the data.

This work contains statistical data from ONS which is Crown Copyright. The use of ONS statistical data in this work does not imply the endorsement of the ONS in relation to the interpretation or analysis of the statistical data. This work uses research datasets which may not exactly reproduce National Statistics aggregates.